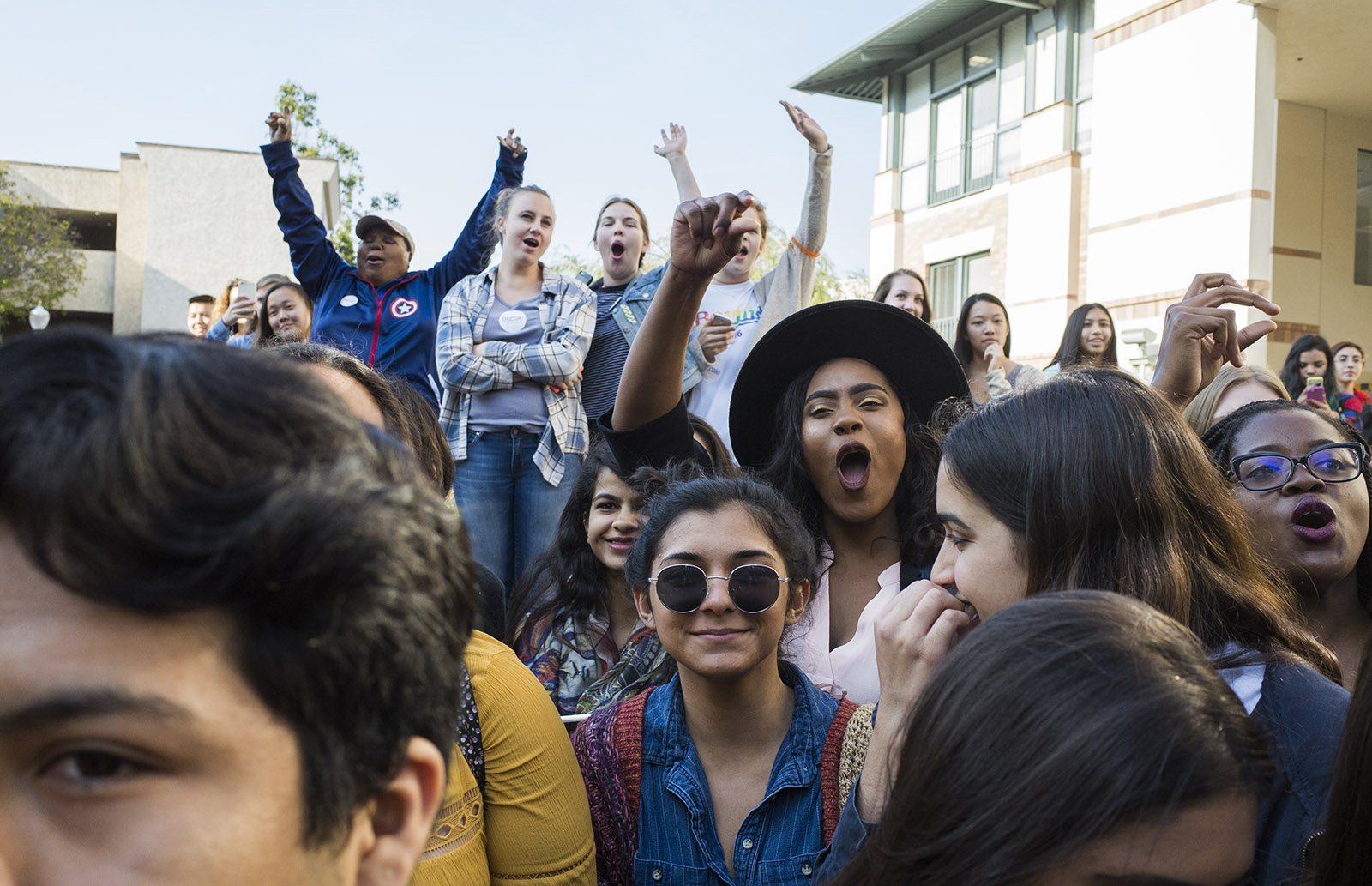 Supporters of presidential candidate Bernie Sanders registered to vote in the upcoming elections and had the chance to meet with famous celebrities, such as Josh Hutcherson (Ken Shin/Daily Bruin)

By Jillian Frankel and Claire Fahy

Supporters of presidential candidate and Sen. Bernie Sanders, I-Vt., encouraged UCLA students to register to vote Monday evening at a “Rock the Campus” event that was part of a larger series of college campus tours.

Celebrity attendees such as Rosario Dawson, Josh Hutcherson and Zoe Kravitz explained the voting process and endorsed Sanders as they helped students register to vote. About 150 people attended the event, hosted by Bruins for Bernie, a student organization.

Student and celebrity activists passed around clipboards to register students to vote, sign them up to volunteer for the Sanders campaign and join the ongoing campuswide efforts geared toward civic engagement.

Gabby Martinez, Bruins for Bernie president and a third-year political science student, said the club was founded last summer, but dissolved at the beginning of fall because of a lack of interest. The group restarted during winter quarter, hosting weekly phone banks, conducting daily voter registration and canvassing out of state.

“We need the numbers,” Hutcherson said. “There’s so much excitement and motivation – everybody’s tweeting and posting about Bernie. But it’s converting that excitement into primary votes, which then gets him elected and turns him into our president.”

Hutcherson added he thinks having conservative candidate Donald Trump in the presidential race will motivate college students to vote more than they would otherwise.

“Young people are already driving to the polls for Bernie,” Hutcherson said. “But in the face of having someone like Trump at the helm for the Republican party – I think it scares people and will energize young voters even more.”

He added he hopes Sanders’ political background will help him work toward bipartisanship in office, citing the senator’s 40-year career as an independent as evidence he can work on both sides of the aisle.

Students and activists at the event said they think Sanders is a good presidential candidate because he is different from his competitors.

“I support Bernie Sanders because of his authenticity and his history,” said Johnny Echavarria, a member of the Bernie Sanders Brigade and a Santa Monica College student. “He’s always been for women’s rights and gay rights … I can’t say that about any other candidate.”

Frances Fisher, an actress and Sanders activist, said she supports Bernie because he has been consistent in his values since the onset of his career.

“He’s the only politician I’ve listened to who can say the same thing … and still be fresh about it,” Fisher said.

Dawson, who spoke at the event, noted presidential politics don’t offer millennials the wealth of options they’re used to, but young people are still responsible for showing up to the polls and encouraging their friends to register.

Nick Cazalis, vice president of Bruins for Bernie and a second-year political science and economics student, said he thinks the presence of celebrity advocates at the event encouraged more UCLA students to register to vote and helped generate enthusiasm as the California primary approaches next month.

The deadline to register to vote in the June 7 California primary elections is May 23.