Submission: Systematic oppression of people of color should not be dismissed 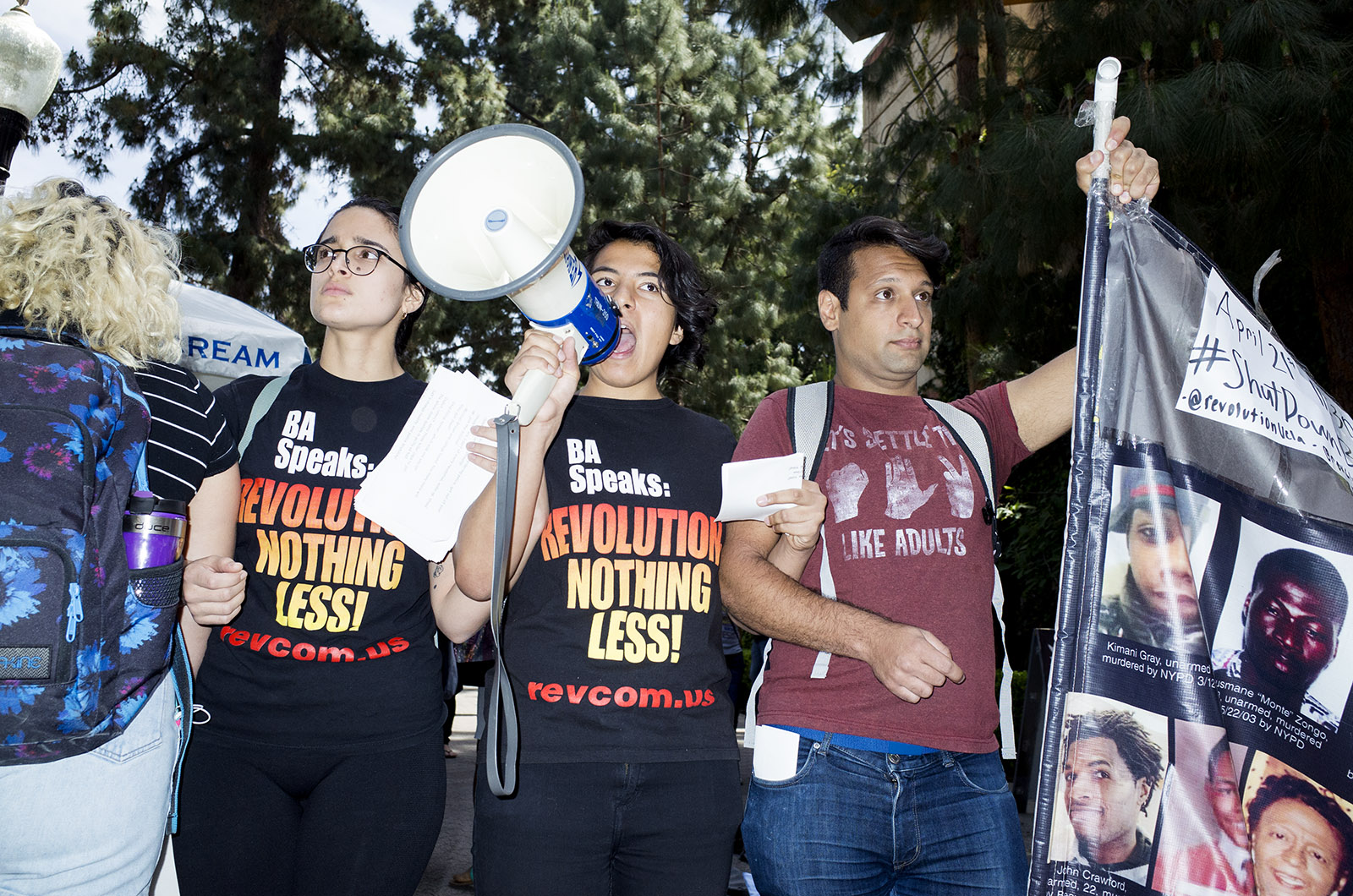 Members of the Revolution Club at UCLA protest on Bruin Walk, stating that their goal is to undermine an inherently racist capitalistic system. (Ken Shin/Daily Bruin)

The callous amusement articulated by Blake Deal at the Revolution Club’s and other students’ participation in the national student day of protest against murder by police – what he called “live entertainment” – brings to mind the amusement of the onlookers who would gather in festivals and picnics, bringing the whole family to watch the lynchings of Black people. There is nothing amusing about the fact that this illegitimate system is waging a slow genocide against Black and Brown people.

This is not hyperbole; there is a slow genocide being waged against Black people in America. It has to do with the nature of the capitalist system and its particular foundation in the U.S., which was rooted in slavery. It is nakedly articulated in a quote from the diary of a top aide of President Richard Nixon, H. R. Haldeman, that “(Nixon) emphasized that you have to face the fact that the whole problem is really the blacks. The key is to devise a system that recognizes this while not appearing to,” and thus was born the war on drugs and the consequent mass incarceration of Black and Brown people. This system has no solution for the oppression of Black people – it is in fact interwoven with the ideology of white supremacy – and it has no future for Black and Brown youth.

As the article “Understanding Genocide, Black People and Capitalist Accumulation” points out, there are three stages to a genocide – demonization, containment and extermination – the first two of which are in full effect. The criminalization is evident in the depiction of people of color in mainstream media: How often do they show black men in a cap and gown when they are shot by the police? Or in the way poor neighborhoods of color are policed more heavily than wealthier white neighborhoods: They are often subject to gang injunctions which oftentimes target youth of color who are merely hanging out as a group on street corners. The containment is evident in the fact that over 2.2 million people are in prison – over half of them Black and Brown – an accelerated rate of incarceration which began with the war on drugs. Although this genocide is not at the stage of mass extermination, there is a basis for it to accelerate, and if it does, people may readily accept the reality, but by then it will be too late to oppose it.

The system which is carrying out the slow genocide is the same system that spews the distortions and outright lies about the history of communism and the socialist revolutions of the past, which Deal repeats. Despite what you have been told, these revolutions were about the struggle for the oppressed to get free. Therefore, it is not surprising that a person who shows such callousness for the masses of people – whose lives are at stake every day because they are living in a society that uses the color of their skin as a justification for their dehumanization – also unquestioningly accepts these lies and distortions.

Those who actually care about getting to a world free of exploitation and oppression, a world beyond the division of rulers and ruled, need to critically inspect what they have been told by this system and learn more about not only the overwhelmingly positive experience of the communist movement so far, but also its shortcomings, including some serious errors and even excesses. This is the work Bob Avakian, chairman of the Revolutionary Communist Party, has done, developing a new synthesis of communism.

The new synthesis of communism is a breakthrough for humanity on the level of what Karl Marx accomplished, and it provides a way out, building on and learning from all of this. Anyone who hates the fact that thousands of people are murdered by the police and millions are incarcerated should not turn away, as Deal did, with smug satisfaction at the current state of the world or choose to be lobotomized by a lack of critical thinking.

We are revolutionary communists who are fighting to make an actual revolution, and we do indeed proceed with all the seriousness required for something with such high stakes for humanity. It is righteous to stand up in resistance against the crimes of this system, and this resistance needs to be part of getting closer to a time when we can make an actual revolution – the only solution which will put an end to the needless suffering around the world, bringing into being a system that actually does have a future for the youth. A system where, as Avakian states in the book “BAsics,” “no more generations of our youth” will be “condemned to an early death or a life of misery and brutality” or “destined for oppression and oblivion even before they are born.”

Deloria is a third-year geography student.