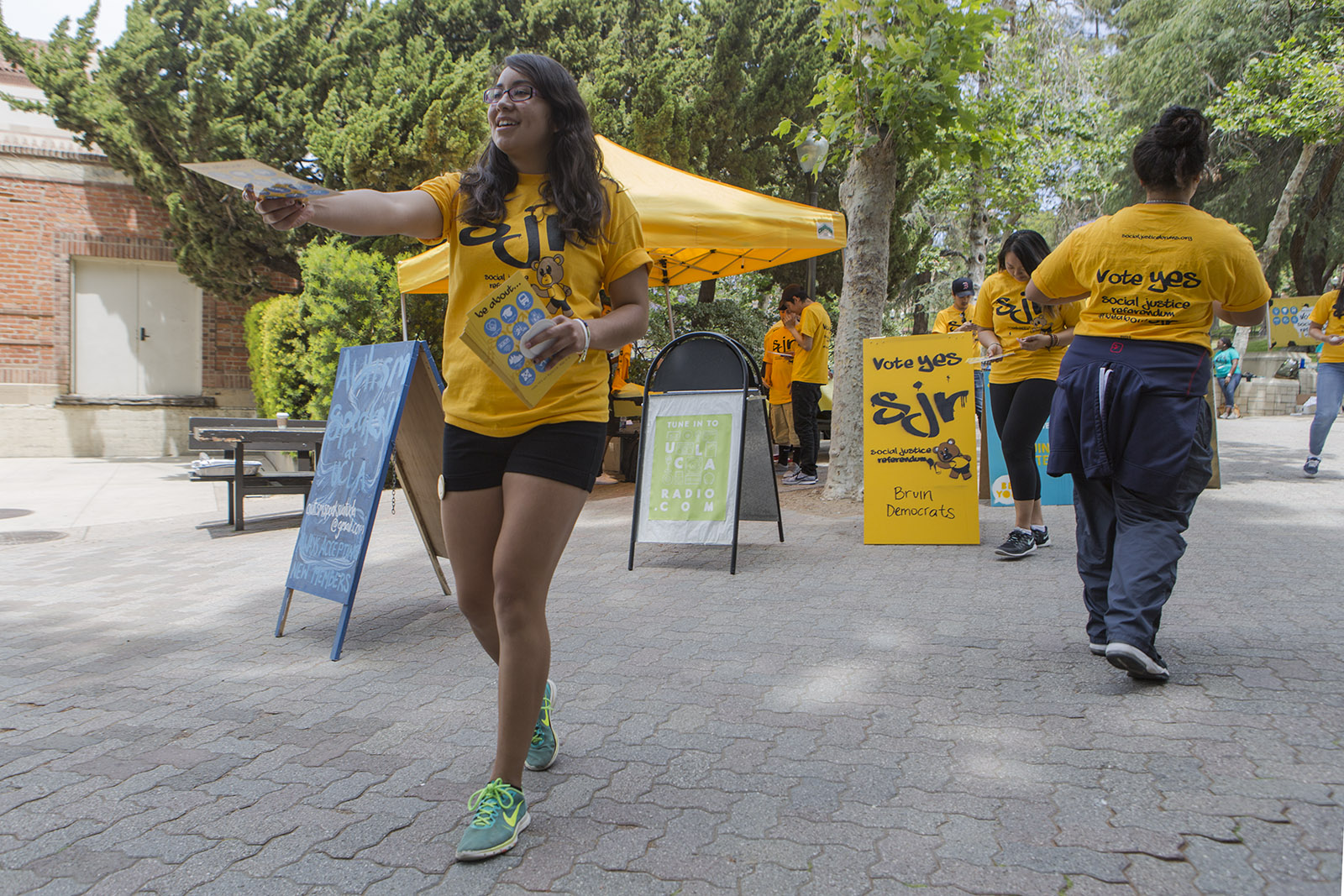 Editor’s note: The referenda on the USAC ballot do not directly compete with one another, but in the interest of full transparency, we believe it is worth noting one of the referenda on this year’s ballot directly benefits the Daily Bruin financially. ​As such, members of the Bruin’s staff will not report any violations to the Election Board. The Daily Bruin and Bruinwalk.com Referendum would support the UCLA Communications Board, the Daily Bruin’s publisher.

Supporters of the Social Justice Referendum played music on Bruin Walk and advocated for the referendum Friday, despite an undergraduate student government election board sanction that barred them from campaigning for the rest of the voting period.

The Social Justice Referendum was also told to stop campaigning on campus and remove campaign material by 3 p.m. Thursday, after a USAC Judicial Board ruling Thursday morning upholding the election board’s original sanction. Referendum representatives also had to provide a complete expense report and return all campaign material to the election board’s office by 5 p.m. The USAC Election Board extended the deadlines Wednesday evening following an internal discussion.

Members of the Westwood Village Entertainment Group stood in front of a stack of Social Justice Referendum signboards and played jazz music on Bruin Walk from about noon to 1:30 p.m. Between songs, the musicians sang “Vote for, vote for SJR” and also told students to vote for Waves of Change candidates.

Veronica Zamani, a fourth-year political science student who donated $500 to the referendum’s campaign budget, said they complied with the sanctions because musicians did not hand out flyers. She added the musicians were singing to exercise their right to free speech.

According to the USAC Election Code, any individual or group efforts to encourage students to support a referendum through the use of verbal or nonverbal interactions constitutes campaigning.

Jazz Kiang, designated representative for the Social Justice Referendum, said he was unaware the musicians planned to campaign on behalf of the referendum.

“I think students have the right to perform … whatever they want,” he said.

USAC Election Board Chair Lindsay Allen said no one submitted forms to report the violations.

Election board members suspended the Monday sanction Tuesday morning, after Kiang and two USAC officers submitted a petition that alleged the election board violated election code for enforcing a spending limit of $750 when petitioners thought the limit was $8,250. The judicial board sided with the election board on four of five counts addressed in the petition.

The election board will announce results at 5:30 p.m. Friday in Meyerhoff Park.