Judicial board to review election board’s alleged violation of code 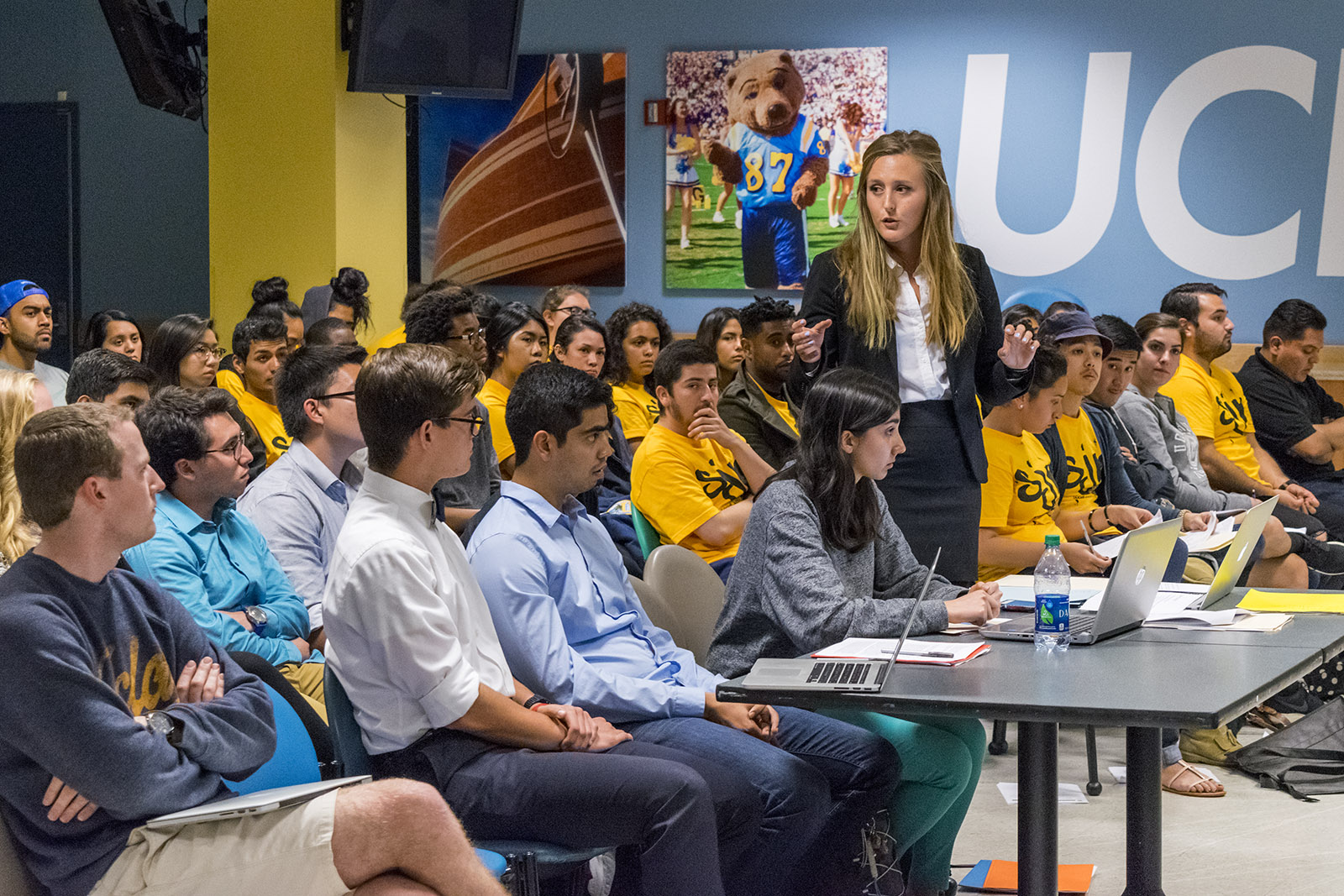 Lindsay Allen, USAC Election Board chair, said the board did not violate the Election Code in a case she presented to the Judicial Board Wednesday night. (Michael Zshornack/Daily Bruin)

Two undergraduate student government officials and Social Justice Referendum supporters argued that the referendum’s campaign did not exceed the mandatory spending limit during a USAC Judicial Board hearing Wednesday night.

Social Justice Referendum campaign representative Jazz Kiang, USAC President Heather Rosen and Academic Affairs Commissioner Trent Kajikawa, filed a judicial board petition that alleged the election board violated the election code by sanctioning Social Justice Referendum under claims of overspending. The petitioners said the referendum should not have the same spending limit of $750 as non-executive candidates for USAC, but rather should follow a spending limit of 11 times that amount, because the referendum funds 11 entities.

The Social Justice Referendum aims to fund a variety of student-run retention and outreach programs on campus, and would increase student fees by $24.99 per quarter. The referendum is one of four ballot proposals in this year’s spring USAC election.

Kiang said he treated the Social Justice Referendum as a slate because a clause in the election code states referenda should abide to the same spending limits and sanctions as candidates and slates, according to Article XI of the USAC Election Code. Rosen and Kajikawa both agreed the clause was vague and referenda could be interpreted as slates that run candidates.

Under that interpretation, Kiang said the Social Justice Referendum should have a spending cap of $750 multiplied by 11, or $8,250, and its campaign budget of $7,400 did not exceed the limit.

Election Board Chair Lindsay Allen said Kiang signed a document that stated the campaign spending limit for the referendum and wrote in the maximum amount of $750 on April 1, during the candidate and slate orientation.

At the same meeting, she clarified referenda are to be treated as non-executive candidates after Internal Vice President Heather Hourdequin asked what the spending cap was for referenda.

“We gave the opportunity for council to discuss the spending limits,” said Shreya Chadda, vice chair of the election board. “We received no indication from council of any objection.”

Allen added the council could have convened the Constitutional Review Committee or reached out to the election board to address any concerns it had about spending caps.

Suman Padhi, director of the Election Board Investigations Committee, said the referendum supporters had the opportunity to complete the paperwork to apply as a slate. Padhi added each of the 11 line items under the Social Justice Referendum could have spent $750, if each had been its own referendum.

Chadda said it would be an unfair election to hold referenda to different standards and assign different spending caps. Kiang said Tuesday he thinks the Social Justice Referendum should be allowed a larger campaign budget because it would impact the campus more than a non-executive council member could.

Beyda said the judicial board will decide within 24 hours because the situation is time sensitive.

Students can vote in the undergraduate student government election until 3 p.m. Friday. The election board will announce results at 9 p.m. Friday in Meyerhoff Park.