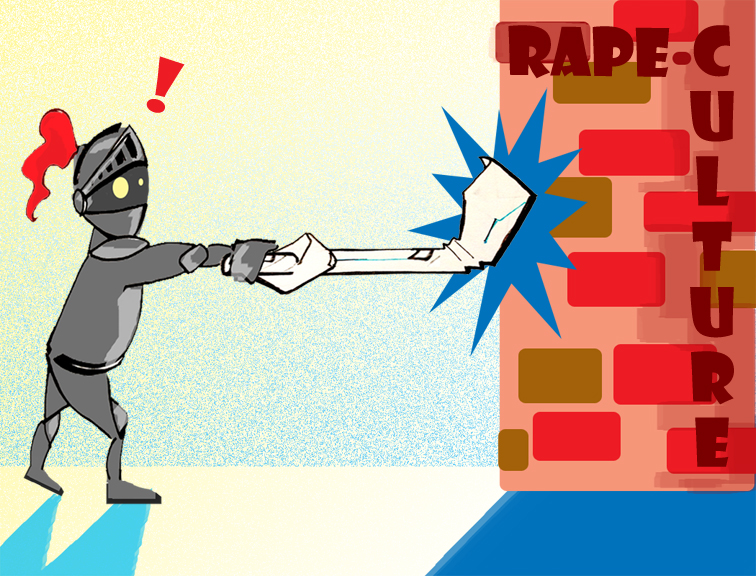 “Congratulations, you’ve been accepted into the Class of 2021! Prepare for a challenging year ahead, which includes losing your virginity to a rapist.”

Under normal circumstances, your everyday college acceptance letter wouldn’t include that second sentence. But, that’s one of several jarring statements presented in an online campaign titled, “Don’t Accept Rape”, which last week released a series of six videos titled “The Unacceptable Acceptance Letters.”

These videos all follow the same structure: a prospective college student is shown receiving a letter of acceptance from a university he or she is very keen on attending, then reading the letter out loud amid slightly exaggerated excitement. However, several lines in, the student begins reading off all kinds of frightening statistics about sexual assault on college campuses. After several minutes, the video abruptly ends with the statements, “1 in 5 women are sexually assaulted in college,” “If they accept you, don’t accept this” and “Demand accountability from your college”.

These videos are clearly aimed at raising awareness of the issue of sexual assault that many college campuses, including UCLA’s, are plagued with.

But it’s not as though students and administrators are unaware of the issue of sexual assault. Considering the sexual assault information sessions during freshman orientation and the online courses we’re required and advised to complete, people become, at the very least, remotely conscious of the idea of sexual assault on campus being a major problem. Because of this, generic awareness campaigns such as “The Unacceptable Acceptance Letters,” which reiterate many of the same messages, often only marginally increase awareness, but don’t necessarily inspire action.

Hence, awareness campaigns alone cannot bring about the reforms needed to address the institutional issue that is sexual assault; rather, it is only through emphasizing a specific call to action that targets administrators and students alike that these awareness campaigns can truly effect tangible change.

The need for institutional-level change to address the sexual assault problem is shown, for instance, by a special report by the U.S. Department of Justice, which found that for the period from 1995 to 2013, only 16 percent of female college students who were victims of rape and sexual assault received assistance from a victim services agency.

More locally, one need only reflect on the UCLA administration’s recent mishandling of history professor Gabriel Piterberg’s punishment for allegedly assaulting two graduate students – a punishment that consisted of little beyond a one-quarter suspension, a $3,000 fine and participation in a sexual harassment training session – to understand how sexual assault is largely an administrative problem – that’s precisely why progressive efforts by students and administrators have targeted administrative policies and procedures.

However, despite this fact, “The Unacceptable Acceptance Letters” aims mostly to describe the nature of the sexual assault problem in an effort to increase awareness, even though the issue isn’t that students lack knowledge of the problem, but that more of them need to be encouraged to take action. And because of this lopsided focus, the videos and other campaigns of the like, are only able to toss in several generic statements about how people should not accept the sexual assault status quo.

What’s missing with these purely awareness based campaigns is a call for definitive action, be that for particular Title IX procedural changes or sexual assault educational requirements for faculty. Through advocating for these specific reforms, awareness campaigns can not only portray the gravity of the problem at hand, but also provide a tangible solution, which is much easier to rally behind than a vague statement urging people to disapprove of rape culture on campus.

For example, Bruin Consent Coalition, a student organization committed to bringing about effective bystander intervention and increased access to university resources that support survivors of sexual assault, has been able to effect notable change by raising awareness and calling for specific actions. According to Chrissy Keenan, one of its co-directors, through conducting presentations at the Campus Assault Resources and Education office, while also working closely with the UC President’s Task Force on Preventing and Responding to Sexual Violence and Sexual Assault, the organization was able to help create a CARE office and a CARE advocate on each UC campus – a significant achievement, to say the least.

Of course, one could argue that awareness campaigns are different from these sorts of solution-oriented campaigns and will continue to play a notable role in the fight against sexual assault on college campuses by exposing incoming students to the issue. In fact, “The Unacceptable Acceptance Letters” does a very good job of raising awareness about the issue of sexual assault through effectively grabbing people’s attention. However, because of its lack of definitiveness in the action it’s advocating for, the campaign falls short in accomplishing what it set out to do – to encourage students to question rape culture on college campuses.

Ultimately, awareness campaigns such as “Don’t Accept Rape,” which asks people to keep colleges accountable, but don’t say what exactly to keep them accountable for, often times do little more than place images and statistics at the back of our minds and occasionally have us think about them. But, with an issue such as sexual assault, which requires diligence and a constant push for change, sporadic pondering won’t cut it; specific action is needed.