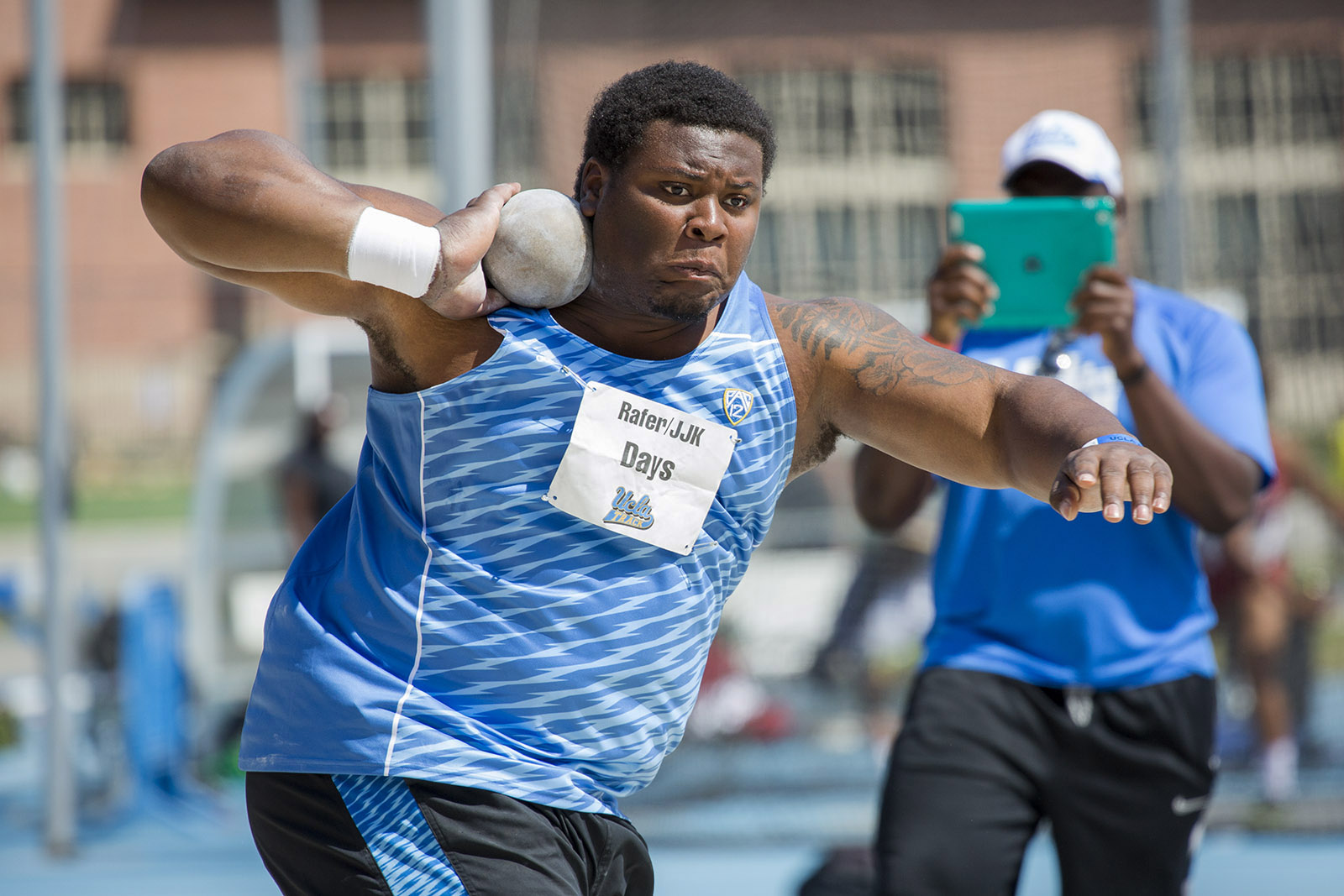 Sophomore thrower Braheme Days’ throw of 66–3.75 over the weekend gave him the sixth longest throw in UCLA history. The mark catapulted him over four past greats, including current throws coach John Frazier. (Daily Bruin file photo)

Saturday was a field day for the UCLA men’s shot put team down in San Diego.

If there were a podium for the top three men’s shot put finishers to stand on, redshirt senior Nicholas Scarvelis and sophomore Braheme Days would be standing next to world champion Joe Kovacs.

The two took second and third, respectively, behind Kovacs in the event at UC San Diego’s Triton Invitational, each setting personal records and putting themselves in the record books.

Scarvelis, with a 7.5-inch gain from last week’s dual meet against Texas A&M, threw 67–7.50 to clear the Olympic standard by nearly 4.5 inches.

At the onset of the 2016 indoor season in January, Scarvelis said he could compete for Greece at the World Indoor Championships depending on how far he threw.

His best mark from the indoor half came at the Lumberjack Invitational in Arizona just days after the interview. The shot landed at 66–9.75, 5.5 inches short of the World Championship entry standards.

Though a month too late for the indoor championships, his comfortable clearance of the Olympic standard this weekend means he’s three months early for the next international track and field spectacle in Rio de Janeiro.

Previously not on the list at all, Days’ throw of 66–3.75 hurtled him over four past greats, including current throws coach John Frazier. His massive 19.5 inch personal record puts him at sixth.

The throw was also the third-farthest throw in the country so far this season. UCLA now claims two of the three top men’s slots in the shot put and holds one of the top four women’s spots, as redshirt junior Torie Owers currently stands in fourth.

The throw also puts Days second in the country, as UCLA claims two of the three top men’s slots. The Bruins also hold one of the top three spots on the women’s side, with redshirt junior Torie Owers standing in third currently.

Redshirt freshman Stamatia Scarvelis threw the discus a personal best 176–11 inches and took second place at the windy Triton Track and Field Stadium. She also came in second among college competitors in the hammer throw.

The throwers were not the team’s only competitors. Freshman Greta Wagner took second place in the pole vault, and sophomore teammate Elleyse Garrett set a personal best as she cleared 13–3.50 on Friday. Shortly after, junior Reed Scale won the men’s open pole vault division for his second win of the outdoor season.

The sights for Scale – and for the rest of the team – are now set on the upcoming dual meet against USC in one week’s time.