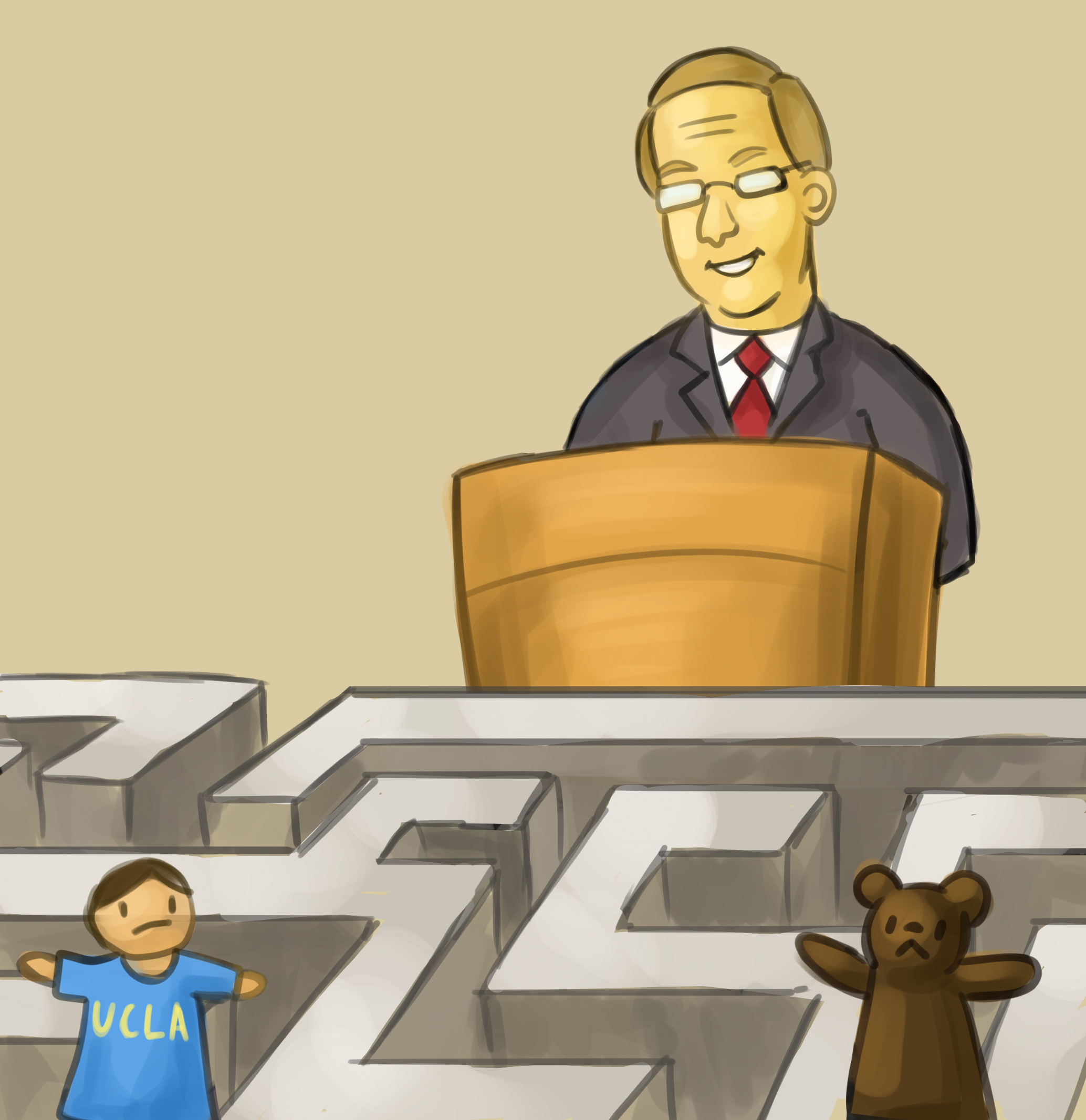 The commencement ceremony is the capstone and conclusion of our college careers and one of higher education’s most treasured rituals. Most of us want someone “important” to speak at ours.

This is, after all, why we make such a big deal out of the keynote speakers at these ceremonies. And some of the most notable speeches by famous and influential figures, such as Steve Jobs and David Foster Wallace, have effectively entered our collective consciousness.

So who the heck is Larry Fink, and why was he selected to speak in front of thousands of UCLA College of Letters and Science graduates this June?

The better question to ask, though, is not why, but how. How does the CEO of BlackRock, an asset management firm that controls $4.6 trillion – an astounding sum that is larger than the 2015 U.S. national budget – have time to do this, and how do so few of us know about one of the most powerful men on Earth? If commencement speeches are supposed to be send-offs to the rest of our lives, he is perhaps the perfect candidate, because he is a living reminder of how in “real life,” faceless firms and shifting stock markets hold ultimate sway over our lives.

Fink isn’t just another mover and shaker; he moves the movers. He loves to give advice, and gave plenty of it when Wall Street was in despair in 2008, becoming one of the most admired – and powerful – individuals in finance in the process. While a low point for everyone else, the financial crisis was a turning point for him and his company, when the U.S. government turned to his company to take care of toxic assets and government lenders that were bailed out to keep the nation’s economy afloat.

Besides the fact that he is at the helm of an obscenely powerful corporation, it’s not surprising to see why Fink was selected. For the UCLA College committee that selects speakers, alum status is a top priority. Fink did both his bachelor’s and master’s at UCLA in the 1970s – a mythical time when UC tuition only cost a few hundred dollars – and is a self-described lifelong learner who regularly makes the rounds on CNBC and headlines on publications like Business Insider, two news organizations I wouldn’t be caught dead watching or reading. His philanthropic efforts to UCLA are admirable: He gave $10 million to have the Center for Finance & Investments at the Anderson School of Management bear his name. It’s another reminder of how Fink, who was paid almost $26 million last year, is divorced from our debt-ridden reality.

While BlackRock is astoundingly influential in the financial world, the work it does is inherently low-key and uninteresting. It wasn’t afflicted like Bear Stearns, American International Group Inc., or any of the other culprits whose irresponsibility inaugurated years of global financial malaise; as a matter of fact, the government contracted BlackRock to take care of its problems. As a money manager, BlackRock merely provides advice – advice that is driven by data, not speculation – to other entities, which rise and fall on their own accord. Asset management firms don’t consider themselves typical Wall Street companies for this reason.

Despite this, what Fink and BlackRock have done is a stark reminder of how powerless ordinary Americans have been since bipartisan efforts to dismantle corporate regulations began in the 1970s. While BlackRock would prefer to see itself as a good guy that helped the government pull the nation out of the throes of financial doom, cares about the effects of climate change and even claims to support the message of Occupy Wall Street, the ultimate goal of all this is to extend its tentacles to more and more of the global economy and to mitigate instability – a risk management firm’s greatest fear. This isn’t about Main Street or the “99 percent” that Democratic presidential candidate Bernie Sanders claims to champion; financiers only concern themselves with issues such rising sea levels or political instability insofar as they create fluctuations and rattle investors, not because they think people matter.

The terrifying and largely overlooked influence of BlackRock bears repeating. If its control of $4.6 trillion is not astounding enough, it actually watches over $15 trillion – 7 percent of all financial assets in the world, as noted by The Economist – because the company lends its trademark risk management tool, Aladdin, to other groups. This also means that even a minor miscalculation could create a world of problems since so many funds are managed or influenced by the firm. Domestically, BlackRock owns non-trivial amounts of shares in 40 percent of all public companies. Fink isn’t just a poster child for corporate capitalism. He probably owns the company that prints the posters.

UCLA spokesperson Jean-Paul Renaud said the committee that selects commencement speakers prioritizes alumni because they want someone who has shared experiences with thousands of undergraduates like us and has the unique “right to finish the (UCLA) story.” I don’t doubt that Fink will have some good stories to tell, but it seems highly unlikely that our post-graduation life will, or should, look anything like his.

Congratulations to the UCLA class of 2016. May we all aspire to someday become Too Big to Fail.