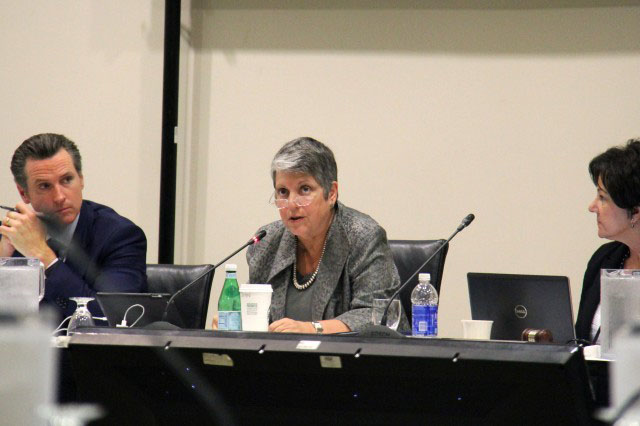 Members of the joint committee, which operates under the President’s Task Force on Preventing and Responding to Sexual Violence and Sexual Assault, received the letter Monday. Napolitano asked members to handle sexual assault cases involving faculty in a more timely manner and implement sanctions appropriate for the offense.

In the letter, Napolitano asked campus officials to immediately designate someone who would work with faculty members and graduate students confidentially. The advocate will advise on how to report such cases, but would not be required to report them. A similar position already exists for undergraduate students.

Napolitano also asked the committee to eliminate the deadline that requires administrators to file charges within 10 days of placing a faculty member on involuntary paid leave. She further requested the committee establish time frames that ensure case investigations are completed within five months – three for the investigation and two for adjudication – barring exceptional circumstances.

The committee will also be required to advise on policies that would ensure multiple offices do not investigate the same incidents.

Several UC campuses including UCLA and UC Berkeley have been criticized for how they handled sexual assault cases involving faculty members. Since 2011, 19 UC Berkeley employees violated university sexual misconduct policy, according to the Daily Californian.

Piterberg reached a settlement with the university in March 2014 that will allow him to return to campus this fall if he paid the UC Board of Regents $3,000. Piterberg was also suspended for one quarter without pay.

The settlement also dictates Piterberg cannot be romantically involved with students or interact with them outside of normal business hours.

Napolitano urged the committee to recommend policy changes by July 31.