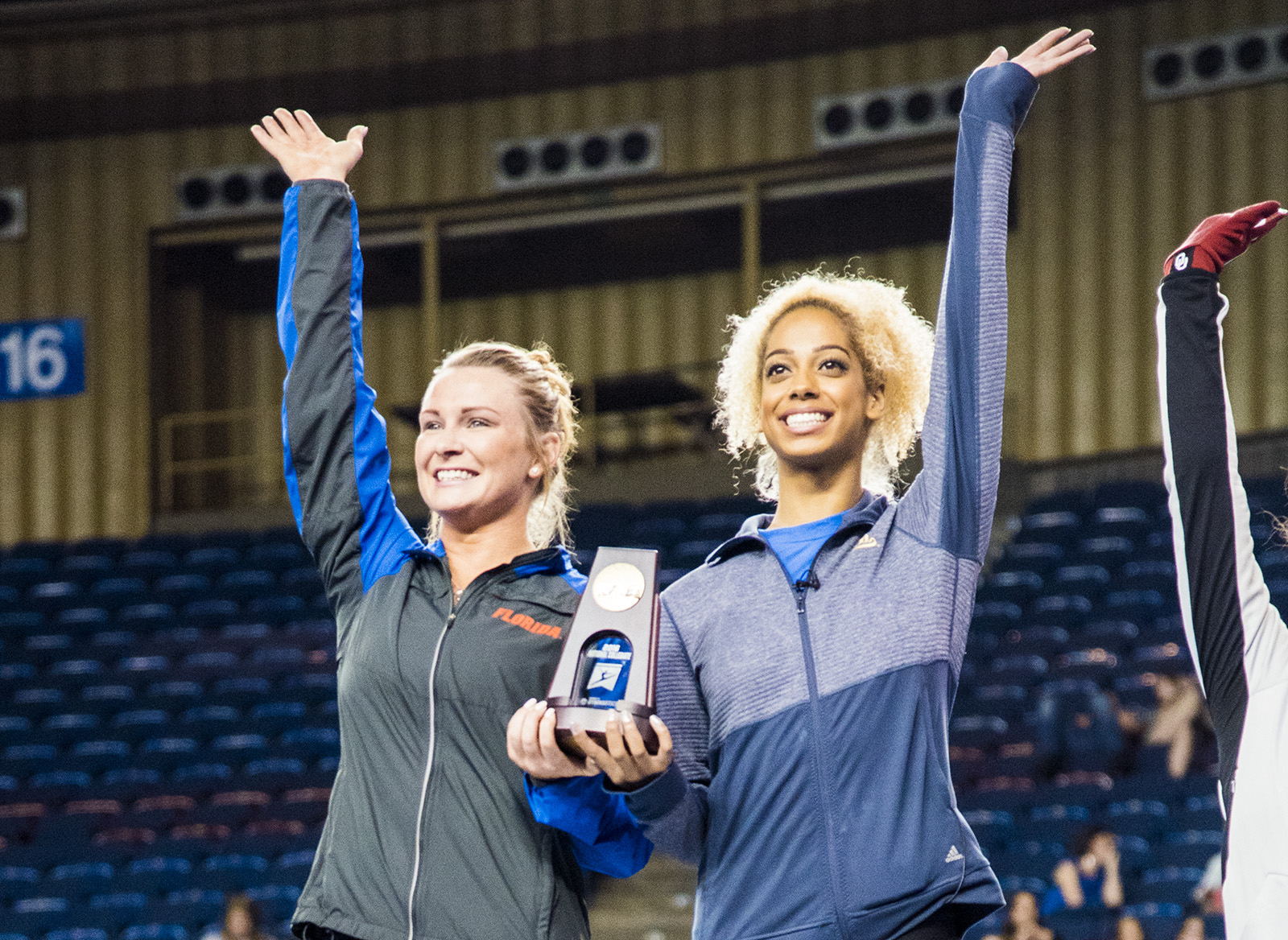 Senior Danusia Francis scored a 9.95 to tie for the NCAA title on balance beam and help the Bruins earn a spot in Saturday’s NCAA Super Six. (Mackenzie Possee/Daily Bruin)

A year after struggling to hit clean routines in the NCAA semifinal meet in Fort Worth, the Bruins scored a 196.700 off 24 hit routines in this year’s semifinal meet, finishing third behind the No. 1 Oklahoma Sooners and the No. 4 Alabama Crimson Tide to earn the final spot in Saturday’s Super Six.

UCLA upset No. 5 Utah to clinch the program’s 19th appearance all time in the Super Six and first since 2013.

In their penultimate meet, the upperclassmen set the tone for the Bruins with top scores in three of the four events, highlighted by stuck landings and clean dismounts.

Coach Valorie Kondos Field led her program back to the final after a three-year absence by emphasizing to her gymnasts the importance of remaining even-keeled even in one of the biggest meets of the season.

“Do normal, do you,” Kondos Field said during the post-meet press conference. “Know your role and do your role.”

Danusia Francis nailed her uneven bars routine, earning two 9.9s from the judges. Her score was one of five 9.8s or higher for UCLA on its first rotation.

Fellow senior Sophina DeJesus had a team-high score of 9.875 – which earned her second-team All-America honors – with all six judges awarding her a 9.85 or higher.

After a shaky team warm-up, the Utes had a subpar rotation with only one vault scoring higher then a 9.85, opening the door for their Pac-12 rival.

The Bruins’ solid performance continued on balance beam. For the second straight year, the NCAA individual beam title returned to Westwood after Francis earned All-American honors and tied with Florida senior Bridget Sloan for the crown with a 9.95.

The senior stuck her side aerial dismount, a staple since her sophomore season, to bring the crowd to its feet.

“Doing that dismount, it’s still just as scary as the first time,” Francis said “But tonight, I managed to pull off a good one to finish off beam. Definitely the cherry on top of making it to the Super Six.”

Following a bye in the third rotation, UCLA had an enormous opportunity to further distance itself from Utah, which ended the meet in sixth place. The first three gymnasts for the Utes struggled on balance beam, forcing them to count a 9.1375 and a 9.4875 in the overall team score.

After freshman and Texan Katelyn Ohashi bounced out of bounds, four of her UCLA teammates notched scores higher than 9.8 on floor exercise. Bruin fans roared after each performance, raising Fatheads and props – including a large iPhone pillow during junior Angi Cipra’s routine – in support of their team.

Redshirt senior Sadiqua Bynum closed the rotation with a 9.875, earning second-team All-America honors and putting UCLA in prime position to close out the meet on their final rotation – vault.

Although they had a cushion heading into vault, the Bruins continued attacking the meet with difficult skills.

The sophomore punctuated the meet for her team with a stuck Yurchenko 1.5, scoring a team-high 9.8625.

With Utah facing an insurmountable deficit and California falling on uneven bars, UCLA secured a spot in Saturday night’s meet against Oklahoma, Alabama and earlier semifinal winners Florida, Louisiana State and Georgia for a chance to win the 2016 NCAA championship.

Five of the teams competing tomorrow have combined to win 26 of the 35 titles – Louisiana State is the lone program in the hunt for its first title – and the last 20 in a row dating back to 1995.

Oklahoma has dominated this season with only one rotation in its last 15 meets scoring below a 49. Florida goes for its fourth straight national championship tomorrow as 11-time NCAA All-American Bridget Sloan finishes a decorated career.

Although the Bruins haven’t won a team title in five years, they believe they have a shot at their seventh title tomorrow night.

“Tomorrow we just go out there,” Kondos Field said. “Go out, show what we got and see where the chips fall.”