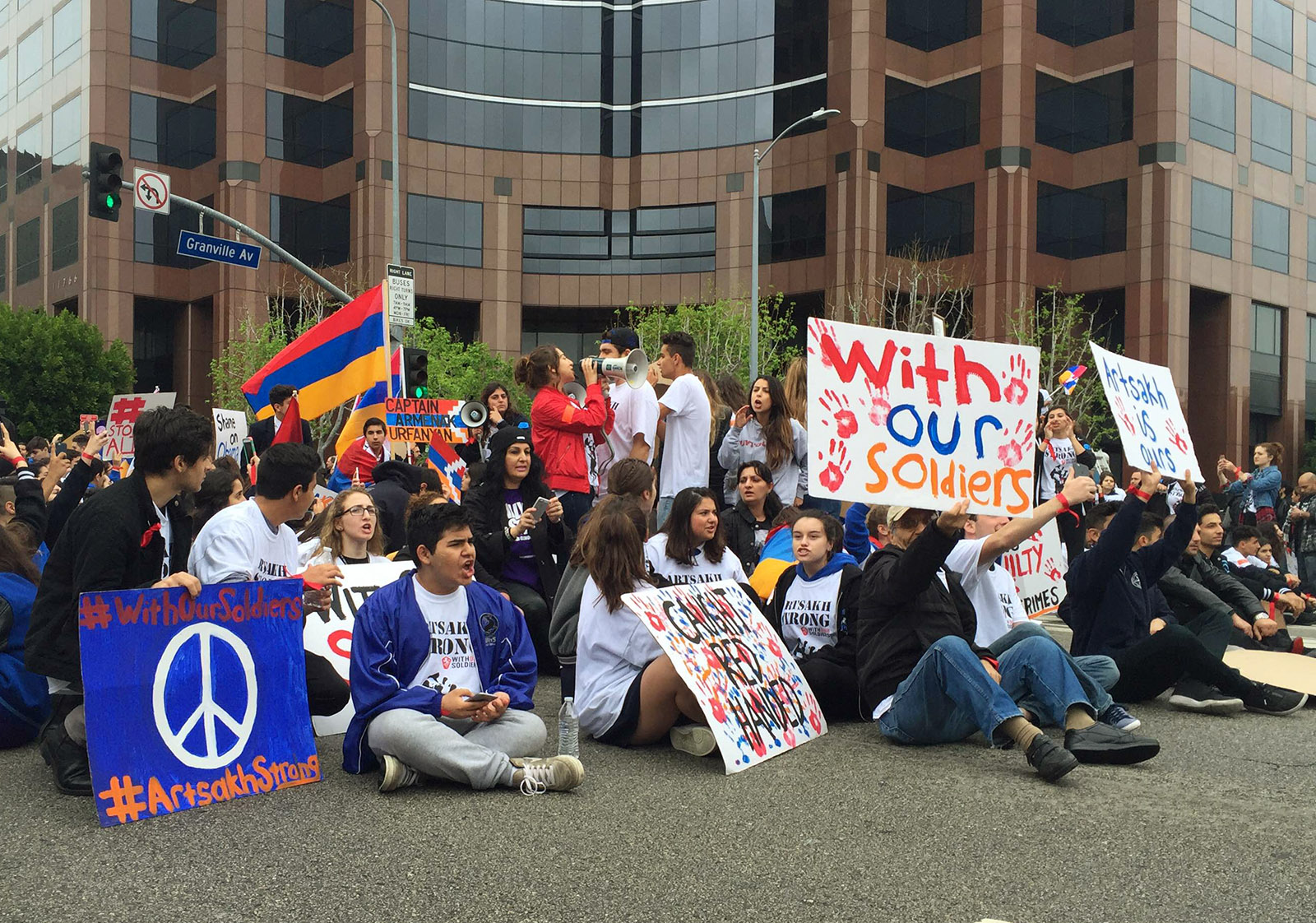 Hundreds of Armenian community members and UCLA students participated in a sit-in Friday at the Consulate General of Azerbaijan’s office to protest recent Azerbaijan violence against the Nagorno-Karabakh Republic, also known as NKR and Artsakh.

Protesters waved red, blue and orange striped flags in the air as speakers from the Armenian Youth Federation chanted from the top of a truck and held signs with “Artsakh strong” painted on them. Artsakh is surrounded by Armenia on its west border, and Azerbaijan on its north and east borders.

United Human Rights Council, a committee of the Armenian Youth Federation, organized the protest to condemn aggression and war crimes carried out by Azerbaijani military forces against Artsakh, said Natalie Kalbakian, president of the Armenian Students’ Association at UCLA.

Violence began April 2 when Azerbaijan violated a ceasefire agreement by using heavy military equipment and firing on the NKR army and populated areas, according to a statement from the NKR Ministry of Foreign Affairs.

The ambassador of Armenia read a resolution on April 5 proposed by Armenia’s president at an Organization for Security and Co-operation in Europe meeting that intended to stop the violence. Both countries’ troops would be required to return to their positions before the violence began, and ceasefire violation investigation mechanisms would be stationed at the border.

Sarin Keosian, a member of the United Human Rights Council, a committee of the Armenian Youth Federation, said the protest aims to alert United States officials of the severity of the situation, prompt them to condemn Azerbaijani crimes and support Artsakh.

She added she hopes Artsakh civilians can take comfort that diaspora Armenians from all over the world stand with them in solidarity. There have also been protests in Australia, Lebanon and Greece and other countries.

Arev Hovsepian, external vice president of the Armenian Students’ Association at UCLA, said she thinks Azerbaijan’s unwillingness to stop the attacks should convince U.S. officials that Artsakh is not at fault and needs assistance.

“People will keep dying as long as real measures of peace do not take place,” Hovsepian said.

“As Armenian-Americans, we must work to hold the U.S. government accountable for its involvement with this corrupt regime,” Kalbakian said.

She added she thinks the U.S. government’s position of false neutrality enables Azerbaijan’s actions and hurts innocent civilians in Artsakh.

Ryan Ahari, a fifth-year political science and African American studies student who said he is Iranian with an Azerbaijani and Turkish father and Persian mother, said he attended the protest in support of Artsakh.

“It’s hard to side with your own community when they’re wrong,” Ahari said. “This war threatens the self-determination of the Artsakh people, and we need to help them live in peace.”