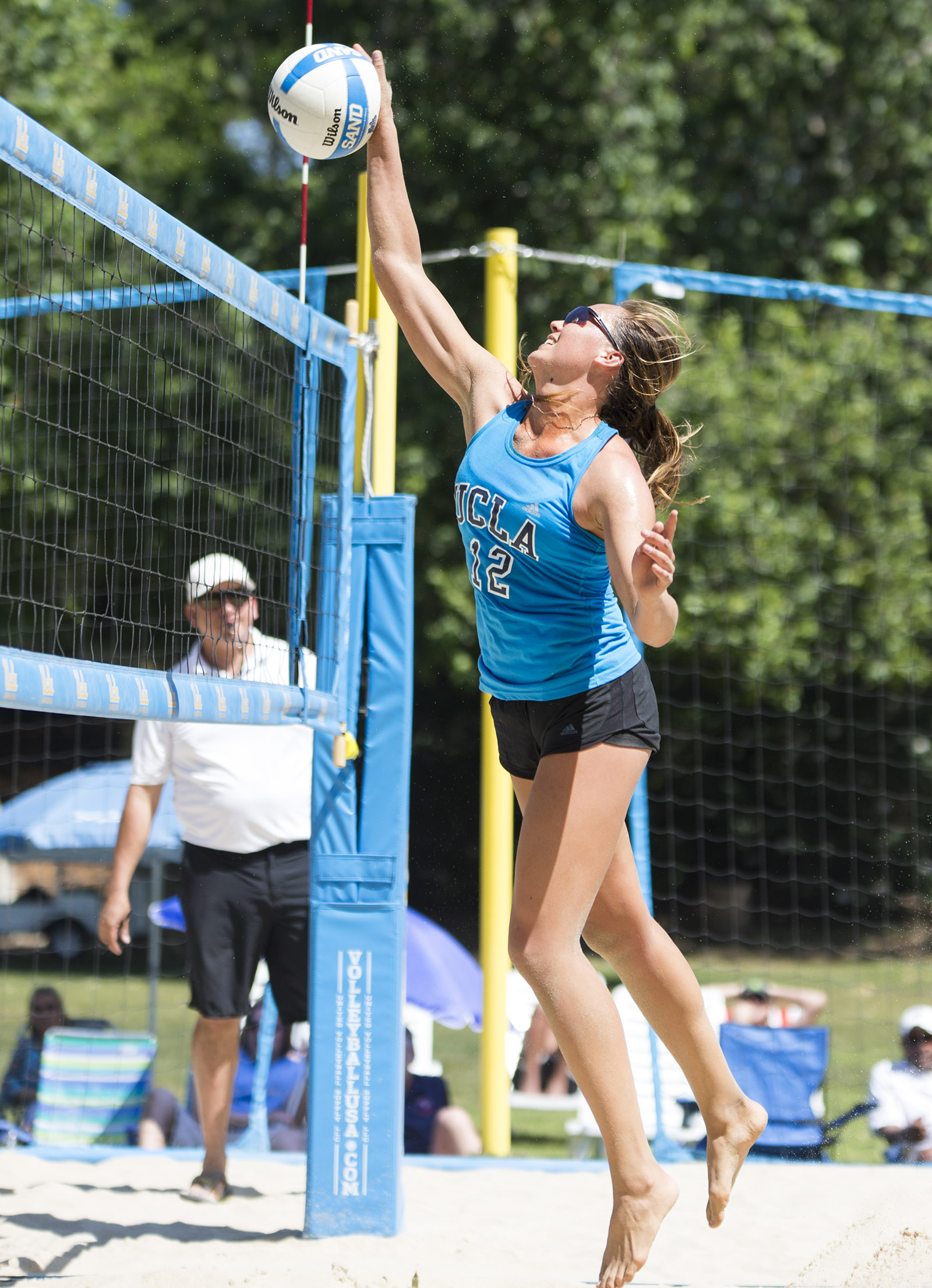 Senior Kamila Tan said the UCLA beach volleyball team had to change its style of play to deal with the rain this weekend. The Bruins focused on preparation and emerged with back-to-back sweeps. (Daily Bruin file photo)

Early April in Southern California is supposed to sport nearly immaculate weather. It is usually the time of year when people trade in their sweaters and pants for swimming suits and a tan. Saturday, however, was a different story.

“Wind was swirling, rain was coming and going – it wasn’t ideal playing conditions,” said coach Stein Metzger. “That was certainly an equalizer.”

In spite of the unfriendly weather, the Bruins started their day with a strong victory over unranked San Francisco (14-3). They won all five doubles matchups to complete the sweep.

The following game against No. 6 Long Beach State (9-8) was the big one, with the NCAA championships at Gulf Shores, Alabama, looming large on the stormy horizon. UCLA picked up all five points in that game to end the day with two sweeps.

“We were concerned about playing Long Beach State, who played us tight the last time, and we put a lot of hard work into them this week,” Metzger said. “The challenge was having to play San Francisco. That wasn’t easy to prepare for Long Beach State, then play our game against San Francisco and take care of them.”

While the weather proved to be an important factor in both games, the Bruins were prepared for it. The rains that started Thursday provided the team with a preview of Saturday’s soggy attractions.

“It rained a little bit this week in practice, so we got to play in that leading up to the weekend,” said senior Kamila Tan. “You have to change up your style of play, so we made sure we were prepared and went into it with a good mindset.”

Preparation was the key word for the Saturday matches. Not only because the Bruins dealt with the wet and windy conditions to snatch two important triumphs, but also because the weather provides them with useful experience. It forced them to deal with something different to what they normally have to at the relatively tranquil Sunset Recreation Center.

“Anytime we get a chance to play in weather will prepare us well for the NCAA’s,” Metzger said. “In Gulf Shores, there always seems to be some weather.”

The victories, especially the one against Long Beach State, add more weight to UCLA’s already impressive NCAA Tournament resume. The Bruins’ continued positive displays against top teams have them in a good position heading into the crucial final stretch of the season.

“We are coming together really well the last couple weeks,” said freshman Izzy Carey. “We had a huge win against Pepperdine, another against Hawaii and now we’re hoping to get both against Long Beach State to keep our set seed into the tournament.”