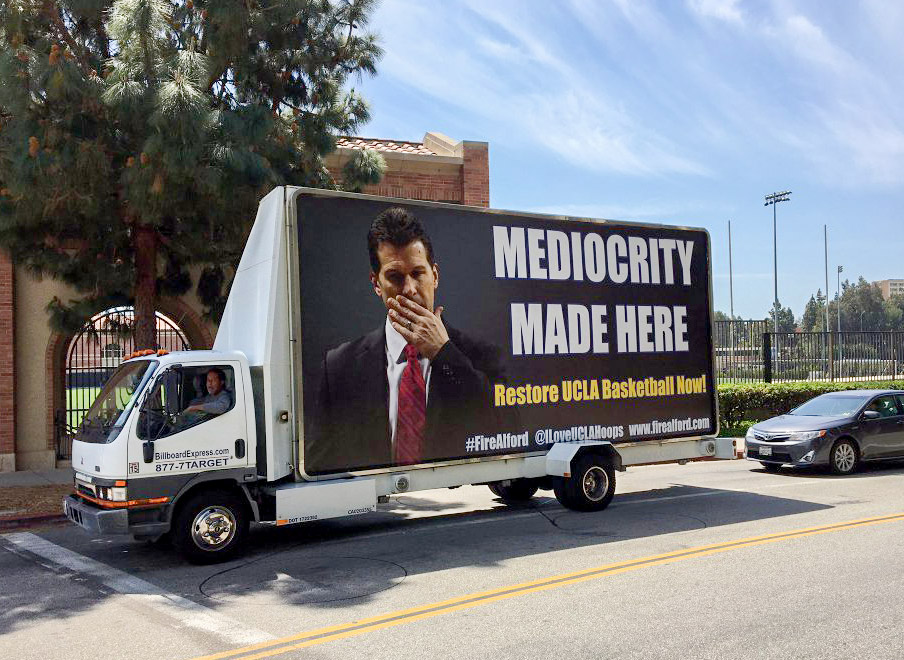 Twitter is abuzz with infuriated UCLA basketball fans. Bruin Walk? Not so much.

As mobile billboards calling for the firing of coach Steve Alford made appearances around campus Wednesday – continuing a string of actions demanding his release – the Daily Bruin set up shop at the newspaper stand outside of Ackerman Union to gauge reactions from the general student body.

Out of 100 random students walking to and from classes, only 30 knew that Alford is the current UCLA men’s basketball coach. Of that minority, nearly 75 percent either favored giving him a fourth season at the helm or felt indifferent about the situation. But there were still mixed feelings.

“I think they should give him one more year to see the new recruits,” said second-year cognitive science student Jared Schwartz. “If he can’t get it done then he should be fired – if they fired him now, though, I wouldn’t be mad.”

Eight students advocated for his immediate firing – many doing so passionately.

“I’m not a fan (of Alford),” said Mackenzie Murphy, a first-year cognitive science student. “He plays his son more minutes than Kobe played in his prime. We need a less biased coach.”

Recruiting was also an argument used to advocate for his firing.

“We need better leadership,” said second-year biology student Andrew Kageyama. “If he comes back, there’s good recruiting that could go to waste.”

It was rare, though, for students to know who is currently the UCLA men’s basketball coach.

One student mistakenly called Bryce Alford the coach before correcting himself. Another asked if UCLA’s coach is John Wooden. A third simply said he thought the coach’s name was “something like Jacob.”

Many either knew about the billboards and planes on campus or simply knew about the movement to oust the coach, but the majority remained largely indifferent.

“I think people give in too much to the idea that he’s doing a bad job,” said Cooper Kass, a third-year biology student. “One person says he is and then everyone joins in – it’s a bandwagon effect.”

Emil Shallon, a third-year electrical engineering student and co-president of The Den Roar Core, said that the student fan group was more focused on the athletes than on advocating for specific actions from the administration.

“It should be interesting going into the future,” Shallon said. “As a group, we always work on supporting our athletes and that’s what we’re gonna continue to do next year.”