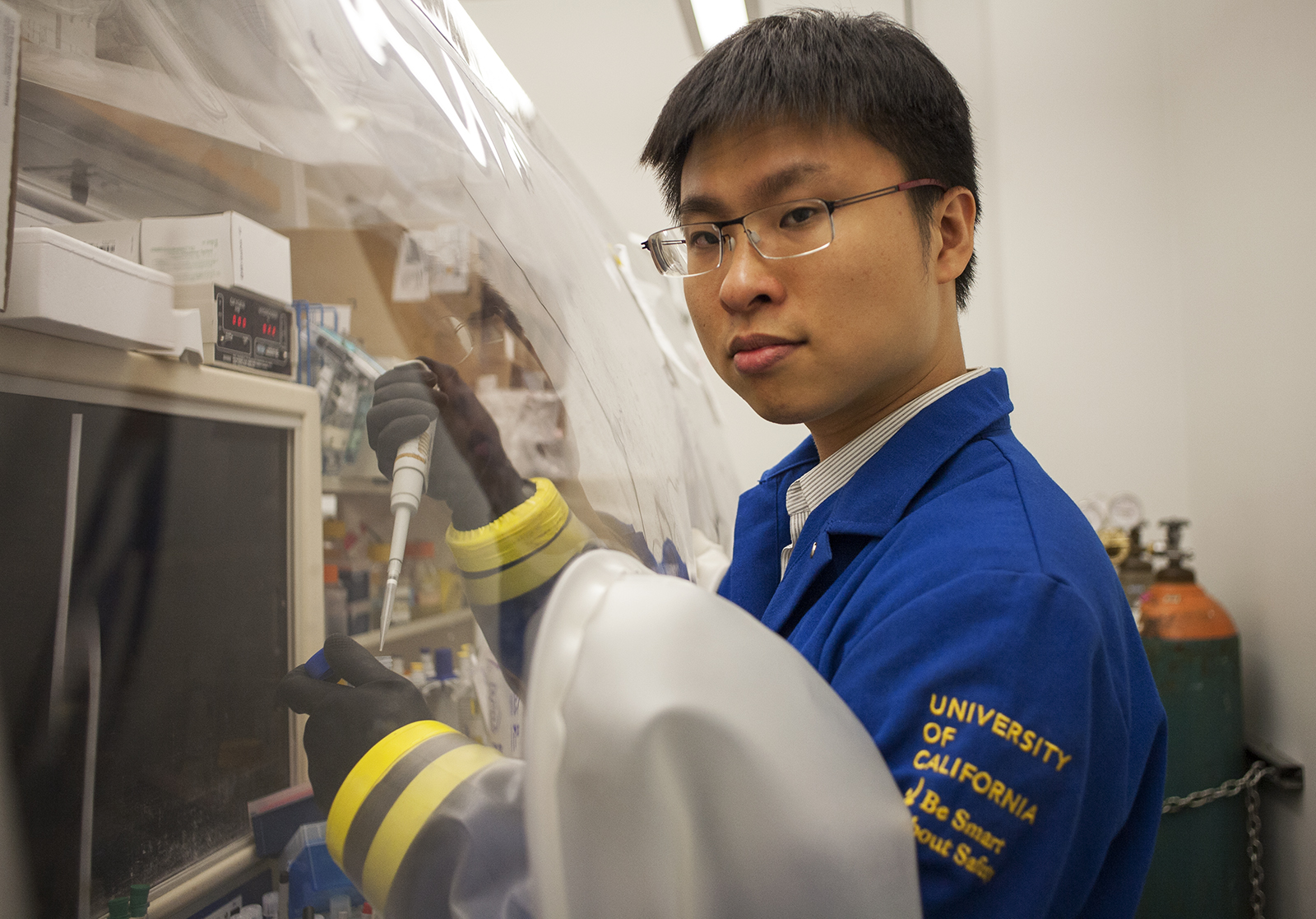 Paul Lin’s genetically engineered bacteria would have died if exposed to oxygen. Instead of handling the bacteria in open air, he sticks his hands into thick rubber gloves built into the side of a transparent tank, inspecting a test tube filled with clear yellow liquid.

UCLA researchers have been using bacteria, microscopic organisms responsible for disease and digestion, to convert living matter into liquid fuel. Lin, a chemical engineering graduate student, is one of many students who work to synthesize eco-friendly biofuels that could expand our options for renewable energy.

James Liao, a chemical and biomolecular engineering professor at UCLA, said he thinks little-known bacteria such as Lin’s Clostridium thermocellum may hold the key to powering the cars, trucks and planes of the future.

“Ethanol is the only biofuel on the market right now,” said Liao, who studies cellular metabolism using biochemistry and genetic manipulation. “We should place priority on the development of alternative energy sources.”

Fuels powering a majority of today’s automobiles produce carbon emissions, which contribute to the layer of dangerous greenhouse gases trapping heat within Earth’s atmosphere, Liao said. He added biofuels produced from saltwater algae, agricultural crops or even landfill waste have the potential to be more cost-effective and up to 15 times more fuel-efficient than diesel fuel derived from crude oil.

But before researchers can introduce biofuels to the commercial marketplace, they must first overcome a number of scientific roadblocks.

In one of Liao’s laboratories, Lin clones and amplifies DNA to genetically manipulate the metabolism of Clostridium thermocellum. Researchers spend up to a month designing a system to increase the concentration of fuel-producing enzymes in the cell.

The project’s team, in its ninth year of a 10-year study, can now use the bacteria to produce five grams of the biofuel isobutanol in three days. Lin said they aim to double that yield.

About 25 researchers, including five undergraduates, study cellular metabolism and biofuel production in Liao’s lab, which receives funding from the U.S. Department of Energy and the UCLA-DOE Institute for Genomics and Proteomics, Liao said.

“It will be a long time before we understand how (metabolism) evolved,” Liao said. “For the time being, we’re just trying to use these pathways for our own benefit.”

Some of his lab’s other projects aim to convert methane gas to fuel. Methane, a greenhouse gas, can be 84 times more powerful at absorbing atmospheric heat than carbon dioxide, according to the Environmental Defense Fund.

“Cells will take sugar (for fuel production) and do all sorts of stuff with it, like building their own parts,” said Bowie, whose research also receives funding from the Department of Energy. “It’s difficult to genetically manipulate organisms. Our approach is to take cells out of the equation.”

Both scientists aim to make their technologies accessible for large-scale use. Bowie said some individuals may be interested in helping him launch a company to market the finished technology.

“We have a lot of technical work to do in driving down costs and scaling production up,” added Deepak Rajagopal, an assistant professor at the UCLA Institute of the Environment and Sustainability.

Diesel fuels and gasoline often consist of organic compounds rich in carbon, soot, and carbon monoxide, according to the Environmental Protection Agency. Biofuels could potentially power our vehicles with minimal net addition of carbon to the atmosphere, said Rajagopal. Liquid biofuels can be poured directly into the gasoline tanks of automobiles, public transit vehicles, planes and ships, he added.

Rajagopal performs environmental impact calculations to quantify environmental footprints, or the impact of human activity on the Earth. This month, Rajagopal received a grant from the UCLA Sustainable LA Grand Challenge to investigate where Los Angeles’ waste is distributed, and how we can best produce biofuels using state resources.

“In California, where we have a shortage of land or a shortage of water, we can rely on agricultural waste or municipal waste (for fuel),” Rajagopal said.

Biofuel is produced in some California cities such as San Diego and Stockton, added law professor Ethan Elkind. Elkind, associate director of the California Climate Change and Business Research Initiative at UCLA, has organized workshops with policymakers and businessmen to discuss solutions to land use, energy storage and rising sea levels.

“We’ve certainly looked at electric vehicles as a great option … (but) electric transport is not going to cover everything,” Elkind said. “We think biofuels are a very promising way to power our transportation needs.”