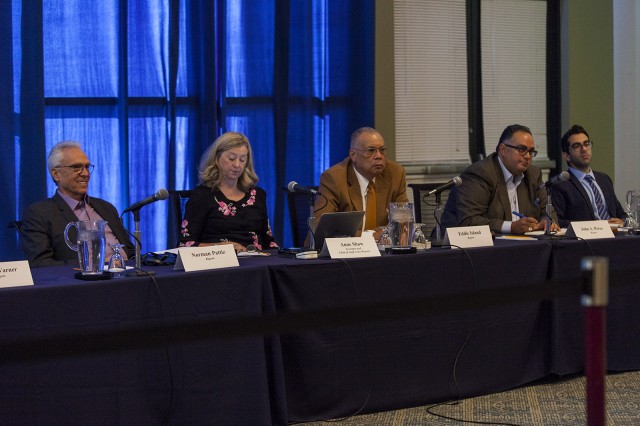 The University of California Board of Regents working group to modify the Statements of Principles Against Intolerance held a public forum in the Covel Grand Horizon room in October. (Hannah Ye/Daily Bruin senior staff)

A University of California Board of Regents panel unanimously approved an amended version of the Statement of Principles Against Intolerance that condemns anti-Semitic forms of anti-Zionism.

Regent Norman Pattiz, a member of the Committee on Educational Policy which voted on the statement, proposed an amendment that revised the language to read, “anti-Semitism, anti-Semitic forms of anti-Zionism and other forms of discrimination,” amid concerns about the statement possibly infringing on free speech.

The original report stated, “anti-Semitism, anti-Zionism and other forms of discrimination have no place at the University of California.”

Student regent Avi Oved said this statement embraces the First Amendment while offering protections to Jewish students who have experienced anti-Semitism on their campuses.

The working group was convened after there was a concern about rising discrimination and acts of intolerance on UC campuses. A public forum convened in October at UCLA to allow comment on the matter. The statement also names other types of discrimination, including Islamophobia, homophobia among other forms of discrimination.

The document is subjected to the full board’s approval Thursday.