Women’s basketball handles USF in second round, advances to the Sweet 16 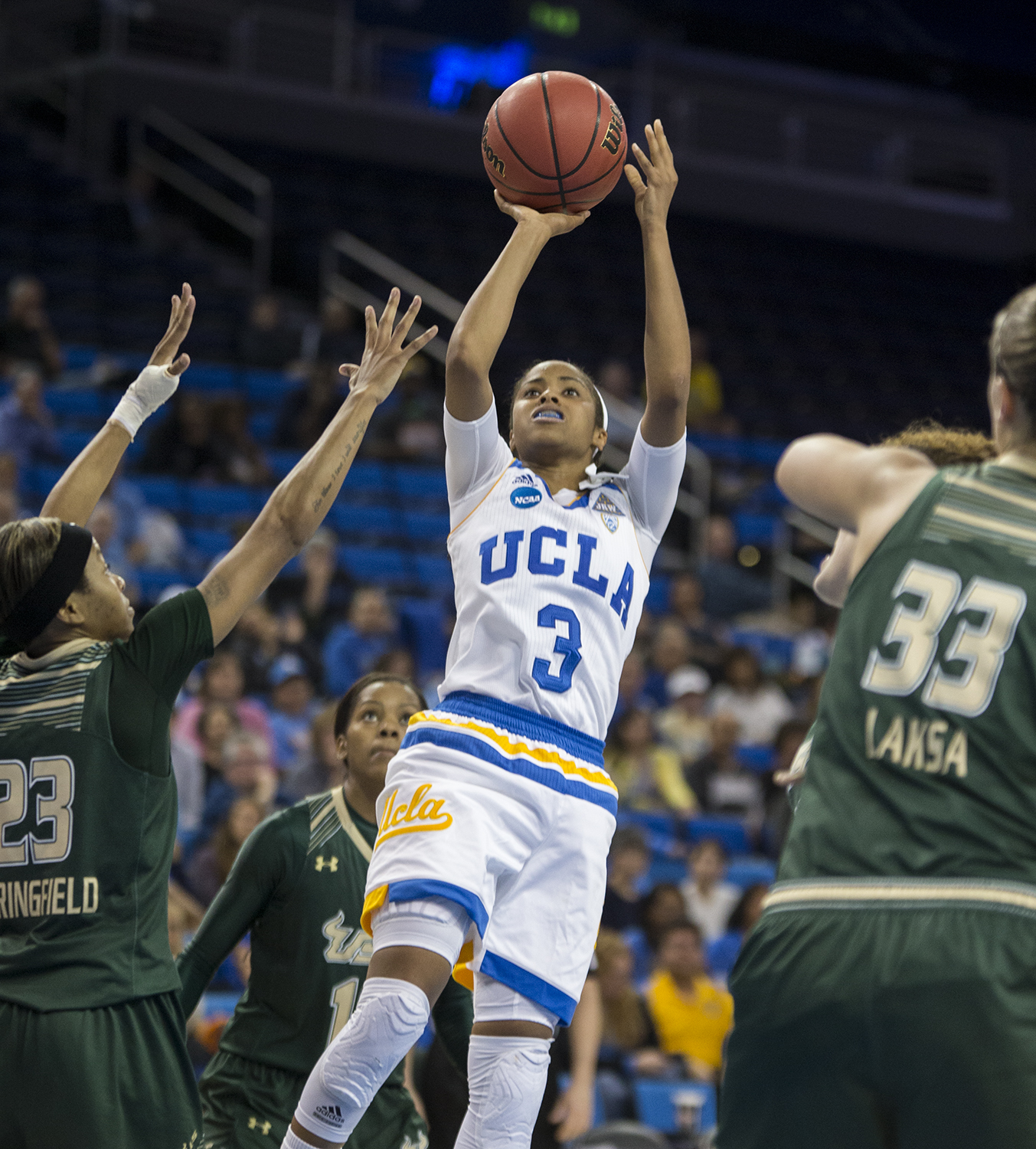 Five seconds remained in the second round matchup between UCLA and South Florida as sophomore guard Jordin Canada stepped up to the free throw line, her team leading by three points.

“I thought this was a huge toughness game,” said coach Cori Close. “Credit South Florida, they’re a really tough team. We knew they weren’t going away.”

Looking at the halftime score – 40-24 in favor of the Bruins – such a quote did not seem appropriate, but this game was very much a tale of two halves for UCLA, though the home team was able to avoid the tragic end often associated with that Dickensian phrase.

The first half was the best of times.

The Bruins dominated the Bulls, who didn’t have an answer for 20 minutes. A series of stops in the first quarter gave UCLA an early lead that it would keep for the remainder of the game. Another successful run on both ends resulted in a 16-point lead heading into halftime.

The star performer during that half was junior guard Kari Korver, whose energy from the start set the tone for the Bruins. She hustled, forced turnovers and created opportunities for teammates.

“She’s the slowest player on the team,” Close said. “Yet she was everywhere. That shows you how hard she works.”

The second half, however, was nearly the worst of times.

“The third quarter has been our best quarter all year long,” Close said. “It concerned me that we lost our energy and edge to start the second half. We couldn’t get stops.”

During that tough stretch for UCLA, USF’s top player – guard Courtney Williams – sprung to life. She had been cold during the first half as senior guard Nirra Fields helped keep her at bay, but Williams quickly became nearly unguardable. She used her quickness to escape the defenders and get off good shots, which started falling.

“Williams is one of the best guards in the country, no doubt about it,” Close said.

In the end, Williams finished with a game-high 29 points and added nine rebounds. She was the biggest thorn in UCLA’s side, but not the only one. Forward Alisia Jenkins picked up 23 points of her own and grabbed nine boards.

At one point in the fourth quarter, the Bulls cut the Bruins’ lead down to a single point. South Florida had all of the momentum and UCLA needed someone to step up.

Re-enter Jordin Canada. The underclassman struggled mightily through the first three quarters, hitting only one of her 11 shots from the field. Then, in the fourth quarter, she took control.

“Obviously, I struggled in the first half shooting-wise, but everyone told me to stay the course,” Canada said. “I let the game come to me in the fourth quarter.”

Canada hit five of seven from the field and all seven of her free throws, which amounted to 17 of UCLA’s 22 points during the final period. Her heroics pushed the team over the top and saved the Bruins from a disastrous meltdown.

Not to be lost in the shuffle were senior guard Nirra Fields, who chipped in with 14 points and provided damage limitation on Courtney Williams, and sophomore forward Monique Billings, who notched 11 points and 10 rebounds.

With the win, the Bruins secured passage to the Sweet 16 for the first time since 1999, when they reached the Elite Eight.

“It feels great, my first time going to the Sweet 16,” Fields said. “If we keep the same intensity we had today, then I’m sure we can be successful in the next round.”

UCLA’s opponent will be No. 2 seed Texas, which strolled to easy victories in its first two matchups of the NCAA Tournament.