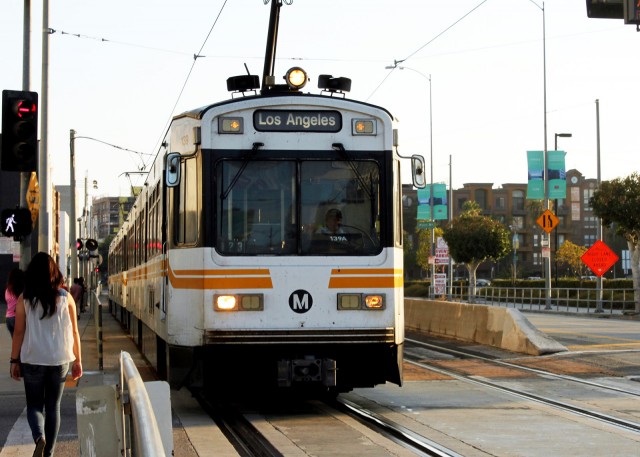 LA Metro officials released a plan for a potential half-cent sales tax increase, which would fund the Purple Line and a train from Westwood to LAX. (Daily Bruin file photo)

County transportation officials announced a potential sales tax measure Friday that would fund the completion of the Purple Line by 2024 and build a train that runs from Westwood to the Los Angeles International Airport, among other transportation projects.

LA County Metro officials expect the proposal, which would increase sales tax by 0.5 percent for 40 years, will generate more than $120 billion to fund highway improvements, bike lanes and Metro operations.

If the Metro Board of Directors votes to add the increase to the ballot, taxpayers will vote on the proposal in November. Gov. Jerry Brown signed a bill in September that allows Metro officials to ask for the tax increase.

Officials hope revenue from the tax will bring the Purple Line extension to Westwood before 2035, to accommodate Los Angeles’ bid for the 2024 Summer Olympics. According to the plan, the tax increase would contribute about $337 million to the extension project. City officials announced in January that Olympic athletes would stay at UCLA if Los Angeles wins the bid.

Metro officials also plan to implement an ExpressLane on the 405 Freeway by 2026, which would cost $130 million. By 2033, officials plan to build a $2.8 billion underground train that connects the Purple Line in Westwood to the San Fernando Valley. They plan to expand the train to the Los Angeles International Airport, which will cost about $3.8 billion, by 2057.

The plan also included a $1 billion Gold Line extension to Claremont and a $200 million streetcar, an electrically-powered tram that runs throughout downtown Los Angeles. The plan also allocates about $420 million to create a bike path along the Los Angeles River and reduce congestion on highways by creating more lanes.

Los Angeles county voters approved a similar half-cent sales tax increase in 2008 called Measure R, which is expected to raise about $40 billion before it expires in 2039. The measure helped fund the Expo Line, which will operate in Santa Monica beginning May 20, and the Purple Line extension, among other projects.

Voters also approved half-cent tax increases in 1980 to fund the Blue Line and 1990 to fund highway and transportation improvements.

The Metro Board of Directors will vote on June 23 whether to add the tax increase to the November ballot. The increase will go into effect Jan. 1, 2017 if more than two thirds of taxpayers vote in favor of it.