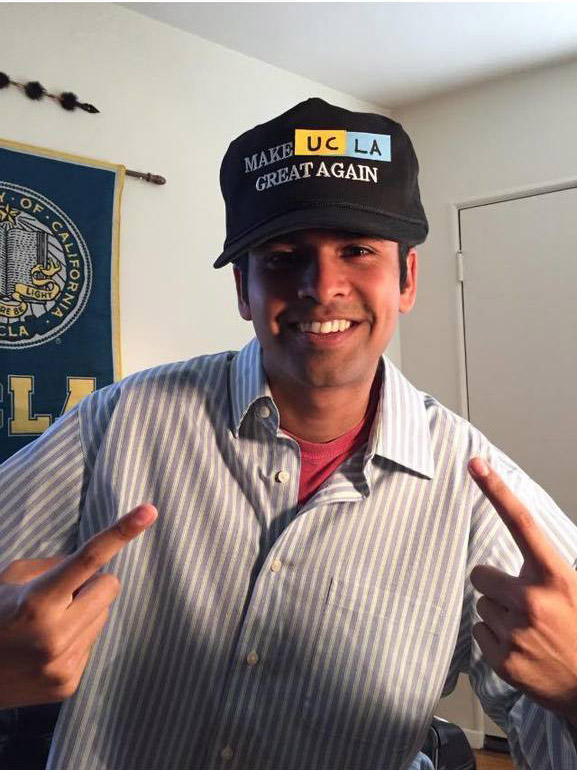 Two new slates, MakeUCLAGreatAgain and Waves of Change, will be running candidates in the spring undergraduate student government elections.

Shubham Goel, creator of MakeUCLAGreatAgain and a third-year economics student, will be the only candidate running under the slate. The Daily Bruin’s Ravija Harjai spoke with Goel, a general representative candidate, about the slate’s political agenda and the changes he would make if he were elected.

Daily Bruin: What does MakeUCLAGreatAgain represent, and what are your goals?

Shubham Goel: It is about boldness. We will make a revolution, a resistance and a rebellion, while remaining transparent. We will tell it like it is, and some of what we will say will be controversial. It will ignite feelings.

DB: How will MakeUCLAGreatAgain change the way Undergraduate Students Association Council is run?

SG: In last year’s election, a lot of the ideas were vague and impractical. The progress made this year was relatively little in relation to students’ lives. The main issue with USAC is that it does not represent students’ interests, so we’re going to tackle the corrupted officials in the USAC government and be open about the inner happenings of the organization.

DB: How will this campaign increase voter turnout?

SG: The last few elections have been like popularity contests – the slates choose candidates who would win. The low voter turnout is catastrophic, because it lets the two main slates hold a majority. The craziest part is that the president’s position has only been occupied by LET’S ACT! and Bruins United. My slate will address students’ interests and draw attention to the election.

DB: What are the some platforms MakeUCLAGreatAgain will support?

SG: As of now, we do not want to reveal our ideas, because other parties may steal them and our creative edge. We’ll share them as soon as the time is right, probably the beginning of spring quarter. However, I can tell you that mental health will be made a priority.

DB: What are your thoughts on the two slates that are currently represented on council?

SG: This year, USAC President Heather Rosen did a good job. However, I’m glad that two new political parties have been formed to challenge the status quo. When the results of the election were announced last year, neither party clapped when the opposite candidate won, which shows they only care about electing their own people. We will change attitudes and be responsible for increasing the voter turnout.

DB: The name of the slate MakeUCLAGreatAgain resembles the slogan of Republican presidential candidate Donald Trump. Is there a relationship?

SG: No, not at all. It is is not political affiliation – I believe national politics should not be involved in college politics. However, our campaign will be controversial. Students can expect a shock factor like Trump’s campaign brings. Last year’s election will be like child’s play in comparison – our small size gives us the luxury of saying what we feel.