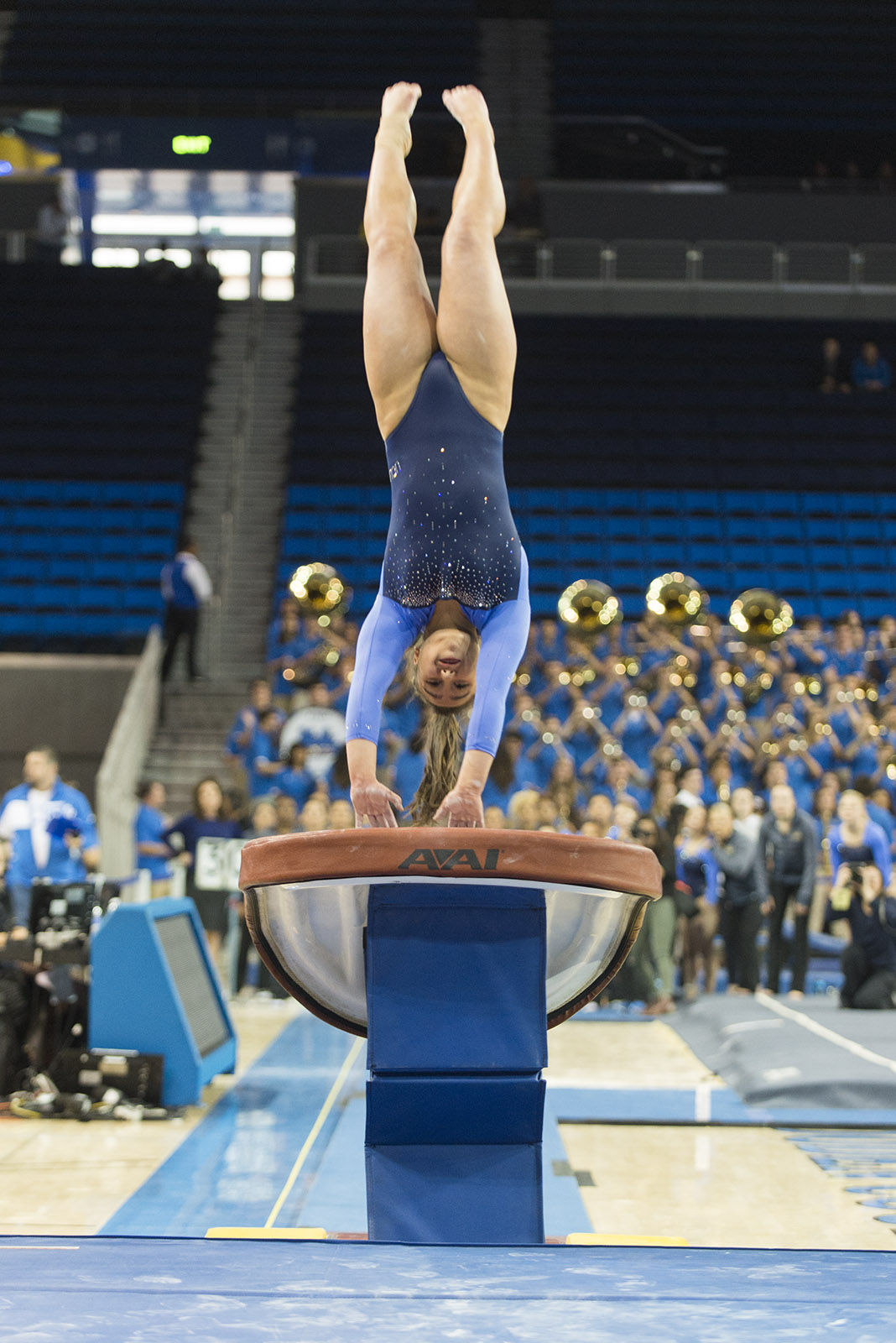 Freshman gymnast Katelyn Ohashi is one of UCLA’s top vaulters but the gymnastics team was able to score its highest vault score of the season while she was injured. (Angie Wang/Daily Bruin senior staff)

No. 7 UCLA (6-2, 5-1 Pac-12) has been one of the standard bearers for floor and balance beam routines since coach Valorie Kondos Field arrived in Westwood. This season has been no different.

But this weekend, the Bruins shift their focus to vault and uneven bars when two top-20 teams roll into Pauley Pavilion for a Sunday afternoon tri-meet.

Facing 10-time NCAA champion No. 10 Georgia (4-5, 4-2 SEC) and conference rival No. 16 Stanford (9-6, 3-4 Pac-12), the UCLA coaching staff says its athletes need to minimize deductions on their two weaker events in preparation for the approaching postseason.

The Bulldogs, who have not lost to the Bruins since 2007, are ranked fourth on vault and sixth on bars, averaging nearly .2 of a point higher on each apparatus.

A scoring change on the vault left UCLA at a critical disadvantage before the season even began.

The standard Yurchenko layout full and layout half most gymnasts perform now have a lower 9.95 start value instead of the full 10.0.

With the new rules, the Bruins, now ranked 11th on both vault and bars, have only two gymnasts who execute 10.0 vaults – sophomore Napualani Hall, who has scored season highs of 9.9s on a Yurchenko 1.5, and redshirt senior Sadiqua Bynum, who had a high of 9.875 on a Yurchenko Arabian.

“Our goal is not to just hit routines, but to hit them spectacularly,” Kondos Field said. “What we do have on vault, we have to do well and cleanly to maximize what we do have.”

Freshman Katelyn Ohashi, one of the Bruins’ top vaulters, sat out with a sternum fracture four weeks ago, leaving a hole in the lineup.

Her teammates filled the void the heralded freshman left and notched UCLA’s highest overall score, a 197.475, and highest vault score of the season, a 49.350, against Oregon State.

Although she has returned to the lineup, Ohashi said her absence proved that any of the 18 UCLA gymnasts could step up and perform against the top teams in the country.

“This team can rely on anyone and it doesn’t matter how many people are out,” Ohashi said. “We can all step onto the floor and hit those routines when it counts.”

Only two home meets stand between the Bruins and the postseason as they chase their seventh national championship.

Top teams, like the Cardinal, who have reached the Super Six three times in the last five years, consistently hit 24-of-24 routines.

UCLA says that these late season meets are about taking its clean practice performances and bringing them to competition.

“The big thing is applying what we’re capable of doing into the meet,” Bynum said. “In competition, what we can do doesn’t always show – it’s all mental and getting it done.”

Email Dam at [email protected] or tweet her @tueydam.