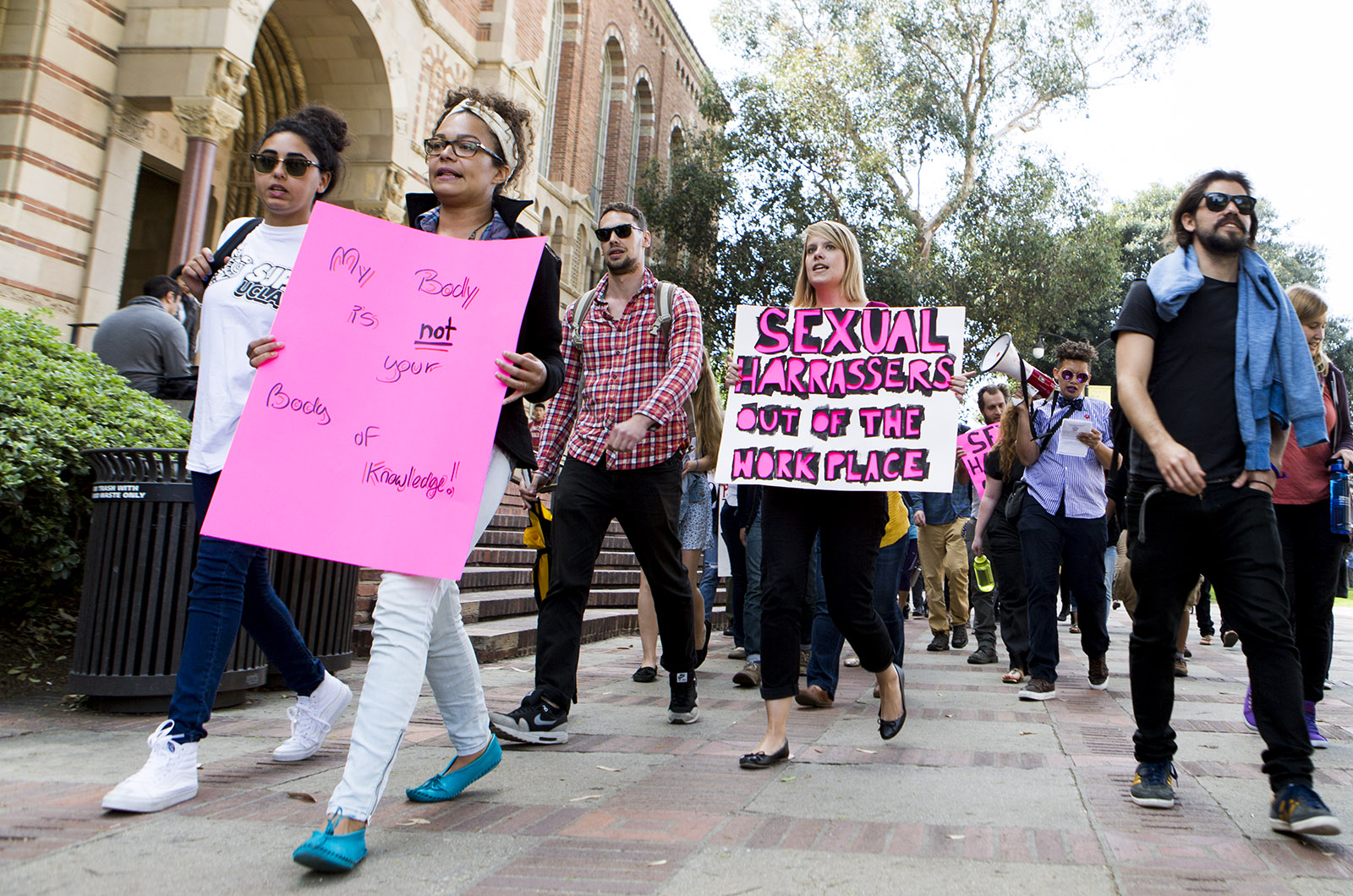 Students chanted “fire Piterberg” as they marched into the history department office in Bunche Hall on Wednesday afternoon, calling for UCLA officials to fire a professor who allegedly sexually harassed two graduate students.

UC Student-Workers Union members organized a march throughout campus in protest of history professor Gabriel Piterberg’s return to teaching and the new Title IX policy, which union members said does not improve conditions for graduate students.

Two graduate students in history filed a lawsuit against the UC Board of Regents in June alleging UCLA officials discouraged them from filing formal harassment complaints against Piterberg. The California Central District Court is still reviewing the case.

UCLA officials said in a statement they reached a settlement with Piterberg in 2014 that allowed him to return to teaching.

Nefertiti Takla, one of the graduate students in history who filed the lawsuit, received an email in January from a history professor that disclosed Piterberg’s settlement included a $3,000 payment to the UC Board of Regents and a quarter off without pay. The professor added in the email Piterberg is not allowed to have romantic relationships with students and is only allowed to meet with students during office hours with his door open.

About 40 students met at the bottom of Janss Steps, before marching to Chancellor Gene Block’s office in Murphy Hall and the history department’s office in Bunche Hall. Several university police officers followed the protesters throughout campus.

UCLA officials said in a statement they take deliberate action in response to all sexual harassment and sexual violence reports. They added they are committed to maintaining an atmosphere where all students can live and learn free from discrimination, harassment, exploitation or intimidation.

Lauren Schaeffer, a member of the union and graduate student in philosophy, said she thinks the new policy does not provide enough protections for survivors who may face retaliation from professors or advisers who harassed them.

Students at the protest said they think UCLA officials are not creating a safe environment for students by not firing Piterberg.

Max Flomen, a graduate student in history who attended the protest, said Piterberg should face harsher disciplinary action for the sexual assault complaints against him and not be allowed to return to UCLA.

“Someone who is a sexual predator should not be able to teach at one of the best universities in the world,” Flomen said.

Brenda Rubio, a second-year Chicana/o studies student, said she thinks protests like this one inform students about Piterberg’s case, which most students don’t know about.

UCLA officials will hold a forum Monday at 6 p.m. in Dodd 147 for anyone who has questions about the new Title IX policies and procedures, according to a UCLA statement.