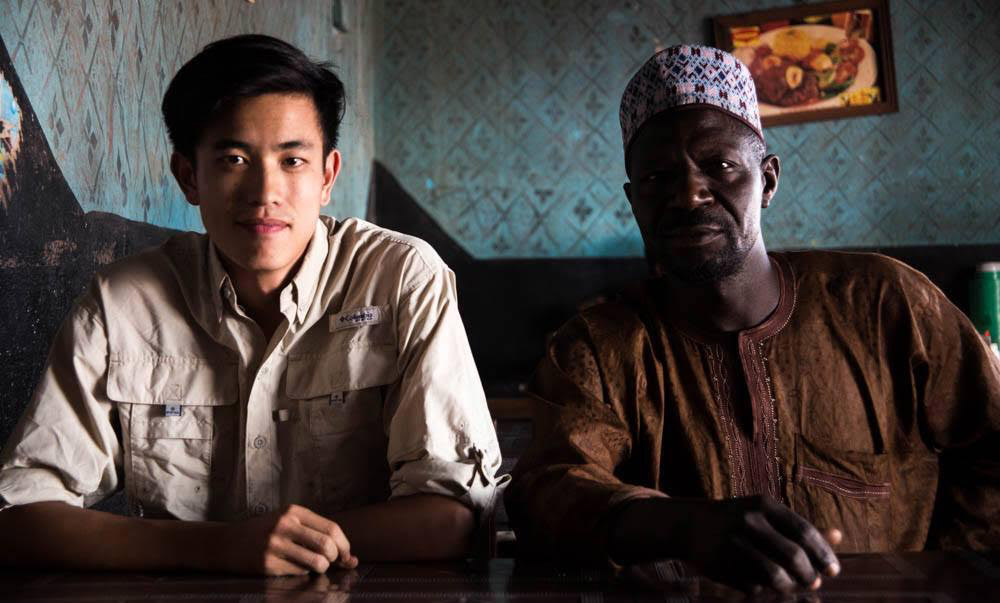 Kevin Tang, a UCLA alumnus and current Peace Corps volunteer, is serving in Atok, Cameroon, and became friends with a Chadian restaurant owner. Tang said they became friends following his frequent visits to the restaurant. (Courtesy of Kevin Tang)

This year, 35 UCLA students were invited to become Peace Corps volunteers. In 2016, UCLA ranked 16th for most volunteers in the nation, according to the University of California Office of the President.

Kevin Tang, a UCLA alumnus and Peace Corps volunteer, is serving in Atok, a small village in eastern Cameroon. He said he is partnering with the Ministry of Public Health in Cameroon to improve maternal-child health programs and working to increase the capacity of Atok’s community health center.

Tang said the village has no running water, electricity, plumbing, refrigeration or grocery stores. He added he thinks experiencing a lifestyle dictated by the village’s distinct living standards has been humbling.

“(Errands) take 20 times longer than they would in the states,” Tang said. “But life is simple, and there are no outside distractions.”

Tang said he wakes up at 6 or 7 a.m. to rooster calls and the sound of the village’s children. He added his workdays as a volunteer vary, but he often logs patients, gives lessons during prenatal consultation and organizes community health workers for the health center.

Working in Cameroon’s eastern region, where Islam is prevalent, exposed him to learning experiences about the religion, Tang said. He added he thinks these experiences have been impactful because Islam tends to be portrayed negatively in the media.

Ryan Ahari, a fifth-year political science and African American studies student, said he will work as a Peace Corps health volunteer in Botswana this summer. He will carry out HIV prevention methods and develop more treatments for individuals with the virus.

“Botswana has the third-highest HIV transmission rate in Africa, yet the country’s prospects are good,” Ahari said. “(Botswana’s treatments) will play a large part in Africa’s future.”

Ahari said his interest and awareness of problems riddling Africa began after he watched “Invisible Children,” a documentary about human rights abuse of children in Uganda. He added he learned more about problems in Africa through UCLA courses about African history and culture.

“My activities and interests in high school opened my eyes to African history,” Ahari said. “Since then, I aimed to study more about Africa and engage with more of its issues.”

Joseph Izaguirre, a fourth-year physics student, said he will teach high school-level math and science in Maputo, Mozambique’s capital. He said he is excited to teach during the summer because he plans to teach math after his Peace Corps service.

Izaguirre said his interest in the Peace Corps began at an information session in California Polytechnic State University, where he studied before transferring to UCLA. He added a former Peace Corps volunteer’s presentation convinced him to explore what the Peace Corps has to offer.

Izaguirre said he was attracted to the Peace Corps because of the cultural and travel opportunities it provides.

“I have not traveled much,” Izaguirre said. “Through the Peace Corps, I get to learn from other cultures and provide positive impacts for them.”

Izaguirre added he is preparing for his time in Mozambique by taking a Portuguese language course.

“I still have many friends in Peru, who serve as Peace Corps volunteers or continue to work there,” said Crawley.

Crawley added she tries to visit her host family in Peru once every two years and maintains contact with them using phone calls and WhatsApp, an instant messaging service often used to send international text messages.

“At the end of the day, there is only so much you can do as one person,” Ahari said. “However, after two years of service, you will walk away knowing that you helped a community immensely.”