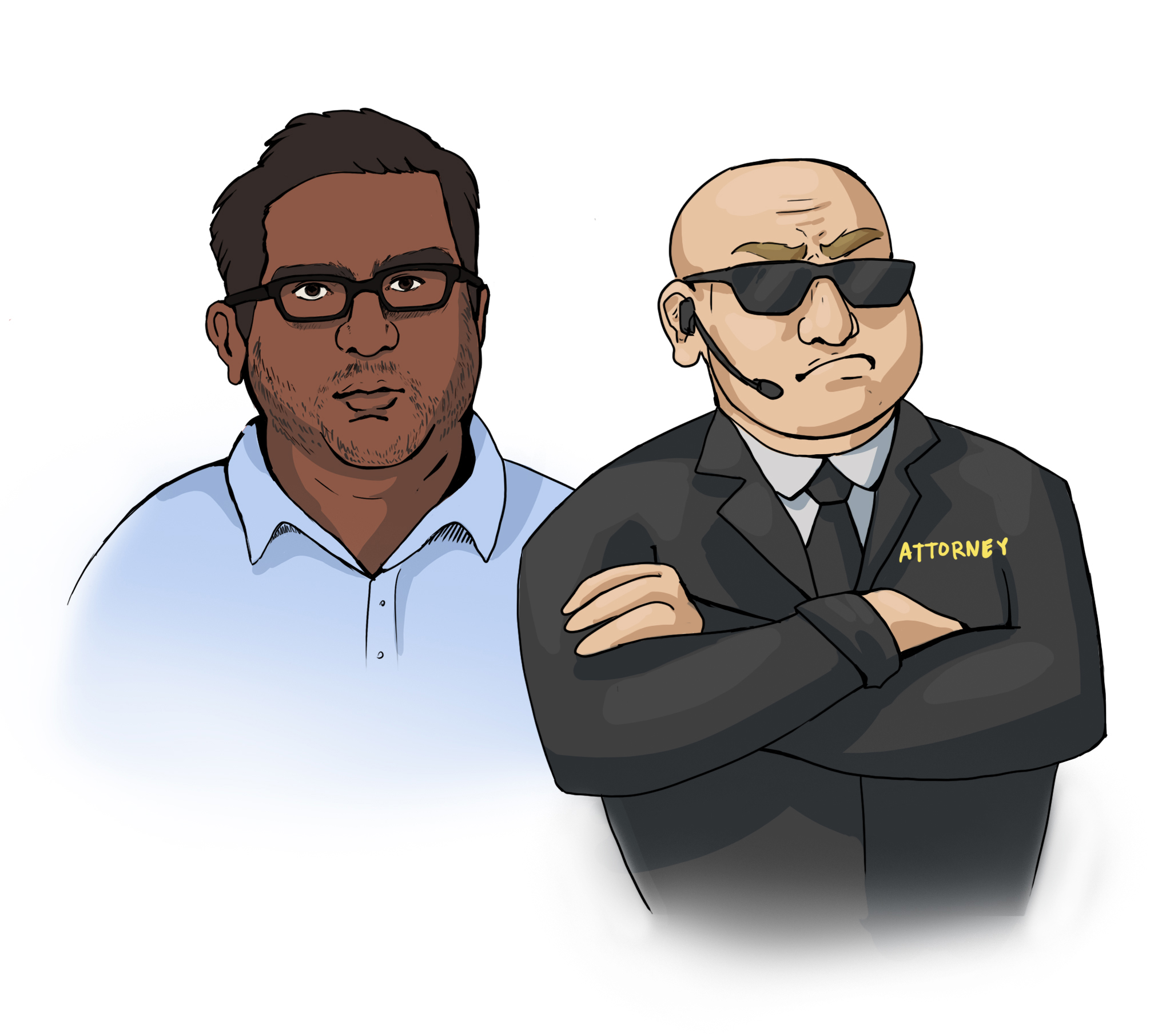 When you’ve been accused of restricting free speech, there’s a list of actions you can take. Hiring lawyers in an attempt to further restrict free speech should rank very low on that list.

And yet, that’s exactly what Milan Chatterjee, president of the Graduate Students Association, did.

In October, Chatterjee told organizers of the Diversity Caucus Town Hall that they would receive funding only if the caucus didn’t involve organizations concerned with divestment from Israel. In response, a series of organizations – including The American Civil Liberties Union – criticized his actions as a violation of the First Amendment. As a result of this incident and other concerns about his fitness as a leader, a sub-committee was formed to review his performance. The committee was unable to reach a consensus on how to draft charges against him due to a constrained timeline and disbanded last week.

Chatterjee mistakenly believes that the committee’s dissolution means that he is innocent, although Tracy Teel, Graduate Student Association in Education co-chair, clearly said otherwise in an email to him. His hired legal counsel sent a letter to the UCLA administration Friday, claiming he’s been a victim of harassment by presenting two instances. One of them is an email from Katherine Myers, a GSA member, adding consideration of charges against Chatterjee to the GSA forum meeting agenda. The other is a Students for Justice in Palestine resolution condemning anti-Arabism and Islamophobia submitted to the GSA for its consideration.

His letter also asks the university to intervene and protect him from this “harassment” by preventing any public discussion of his removal for a minimum of 30 days. While he has the right to fight against any harassment, asking the university to crack down on students’ freedom of speech represents a serious breach in the democratic process in student government.

The most farcical part of the letter is the terms of his demand: “Specifically, we demand that the university administration impose at least a 30-day suspension of any public discussion, investigation, evaluation, review or vote on the alleged charges against Mr. Chatterjee raised by members of the GSA.”

It’s bizarre that he expects the university administration to step in, partially take away students’ First Amendment rights and shelter him from anything that can potentially hurt his feelings. The letter doesn’t back up why 30 days would be needed just to “diffuse the ongoing hostilities” and ensure Chatterjee receives due process.

And there’s a reason for that: because there is no good one. In fact, a cursory look at the both the U.S. Constitution and the GSA constitution shows that his arguments fall apart.

One of the arguments made by Chatterjee is that he was not afforded the opportunity to be heard when the GSA passed a motion to form a sub-committee to review him. However, this committee’s purpose was to decide about his fitness to lead. The GSA constitution provides that an officer should receive the opportunity to be heard before being removed, not before a committee passes a judgement on his performance. In fact, the constitution says that any individual who is the subject of disciplinary action can submit a statement at any GSA meeting or with any appropriate mail ballot. Chatterjee could have submitted a statement to defend himself on his own, without the committee providing terms for his response, as the letter alleges should have been done.

Also, the SJP resolution he was offended by was in no way defamatory. It mentioned that he had shared an article calling SJP an “anti-Semitic hate group.” He should be fully aware that he sent out an email on Feb. 2 to the GSA forum containing the mentioned article. In addition, he shared the article with the Daily Bruin, making it all the more baffling for Chatterjee to claim this motion to be “potentially libelous.”

Granted, Chatterjee did say, in both his email to the GSA forum and to The Bruin, that he didn’t endorse the views presented in the article. But it’s strange that – of everything he could have said in that email – he chose to specifically link the article in question twice, to two different sources.

And even if one gives Chatterjee the benefit of the doubt, the fact that he sent those emails under a thinly veiled guise of impartiality certainly does not support his “libel” argument.

Granted, the lines between libel, harassment and free speech can be blurred. However, in this case, it’s clear that Myers’ email and SJP’s motion do not constitute harassment. Calling a request for adding an item onto an agenda as harassment shows that Chatterjee wishes to shield himself from any possible discussion of his performance.

Consequently, if the university were to approve his request, its intervention would obstruct the democratic functioning of the GSA, preventing members from freely evaluating their elected leader. It would set a precedent for any student government leader to be able to hire a lawyer just to prevent removal. In addition, a suspension of speech for at least 30 days would give the GSA a little more than a month to review Chatterjee before his term ends. His game plan here is to delay and obstruct any possible action that could take away his precious power, as if it were a Supreme Court Justice nominee from President Obama.

Chatterjee has the right to hire a lawyer, even if it is a business and real estate lawyer, and to claim he’s been harassed. However, it’s ludicrous for him to expect the administration to play a mother figure and ask the mean students to back off and stop offending his sensibilities.

Chatterjee might feel the First Amendment should be interpreted based on whether or not he’s offended, but no provision mandates that the university is responsible for protecting the feelings of a GSA president desperate to cling on to his position.