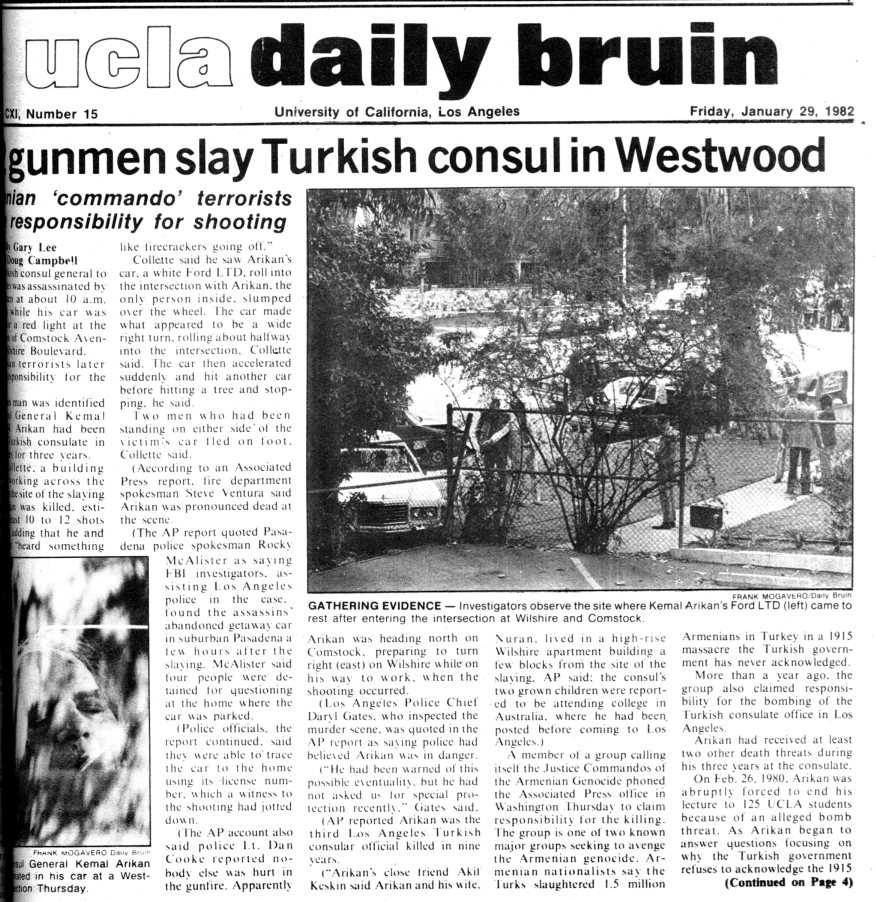 An assassination took place in Westwood in 1982, but most students have probably never heard of it. Unless you’re Armenian, it’s unlikely that you know the names Hampig “Harry” Sassounian and Krikor “Koko” Saliba or the fact that they were involved in the assassination of Kemal Arikan, the Turkish consul general in Los Angeles, just a stone’s throw away from campus. Sassounian received a life sentence for the shooting that killed Arikan in his white Ford LTD as it waited at a red light at the intersection of Wilshire Boulevard and Comstock Avenue. Saliba was never caught. According to an AP report cited by The Bruin, Arikan was the third Los Angeles Turkish consular official killed in nine years. Sassounian is currently serving his sentence at the infamous San Quentin Prison while Saliba is ostensibly still at large, although it has been rumored that he died in Lebanon some time ago. The former’s initial sentence was life without parole, but was converted to 25 years to life with the possibility of parole following an agreement with the district attorney’s office in 2002.

The then-19-year-old Sassounian was a member of both the Armenian Youth Federation and Justice Commandos for the Armenian Genocide, a militant organization active in the 1970s (the so-called “golden age of terrorism”) and 1980s. The group sought recognition of and reparations for the Armenian genocide, which included the establishment of an Armenian state in eastern Turkey, through violent means. JCAG conducted nearly 50 attacks from 1975 to 1984, including a bombing of the Turkish consulate in Los Angeles more than a year before Arikan’s assassination. JCAG was not the only prominent Armenian militant organization at the time. The most infamous of such groups was probably the Armenian Secret Army for the Liberation of Armenia, which engaged in almost 200 attacks that resulted in the combined deaths of more than 60 people. Like JCAG, ASALA aimed to establish a state in historic Armenia, the region roughly encompassing eastern Turkey and what was then the Armenian Soviet Socialist Republic. Both groups have since been dissolved. Although the jury that sentenced Sassounian in 1984 found that the assassination was carried out because of Arikan’s national origin, a special circumstance that was struck down by a federal appeals court in 2000, it is clear that the motive behind the killing was political, not racial. Rather than an isolated incident of hate-fueled violence, it was part of a broader failed tactical shift toward militancy to pressure the Republic of Turkey to pay reparations in one form or another for the mass murder of an estimated 1.5 million Armenians beginning in 1915 by its predecessor state, the Ottoman Empire. Arikan was just one of a number of Turkish officials targeted over an approximately two-decade stretch. After a few scattered attacks in the 1990s, violence gave way to annual worldwide protests on April 24, the day that marks the anniversary of the genocide, and political pressure by lobbying groups, such as the Armenian National Committee of America, as the primary and most high-profile means of achieving genocide recognition. Sassounian remains a major figure in the imagination of the AYF and its parent organization, the Armenian Revolutionary Federation, an Armenian political organization founded in 1890 that continues to operate in the Armenian diaspora and, to a lesser extent, the Republic of Armenia today. The campaign for his release is ongoing. What happened at Wilshire and Comstock more than 30 years ago is largely forgotten today. But, at least for two communities, the intersection remains a site of fierce mnemonic contention.