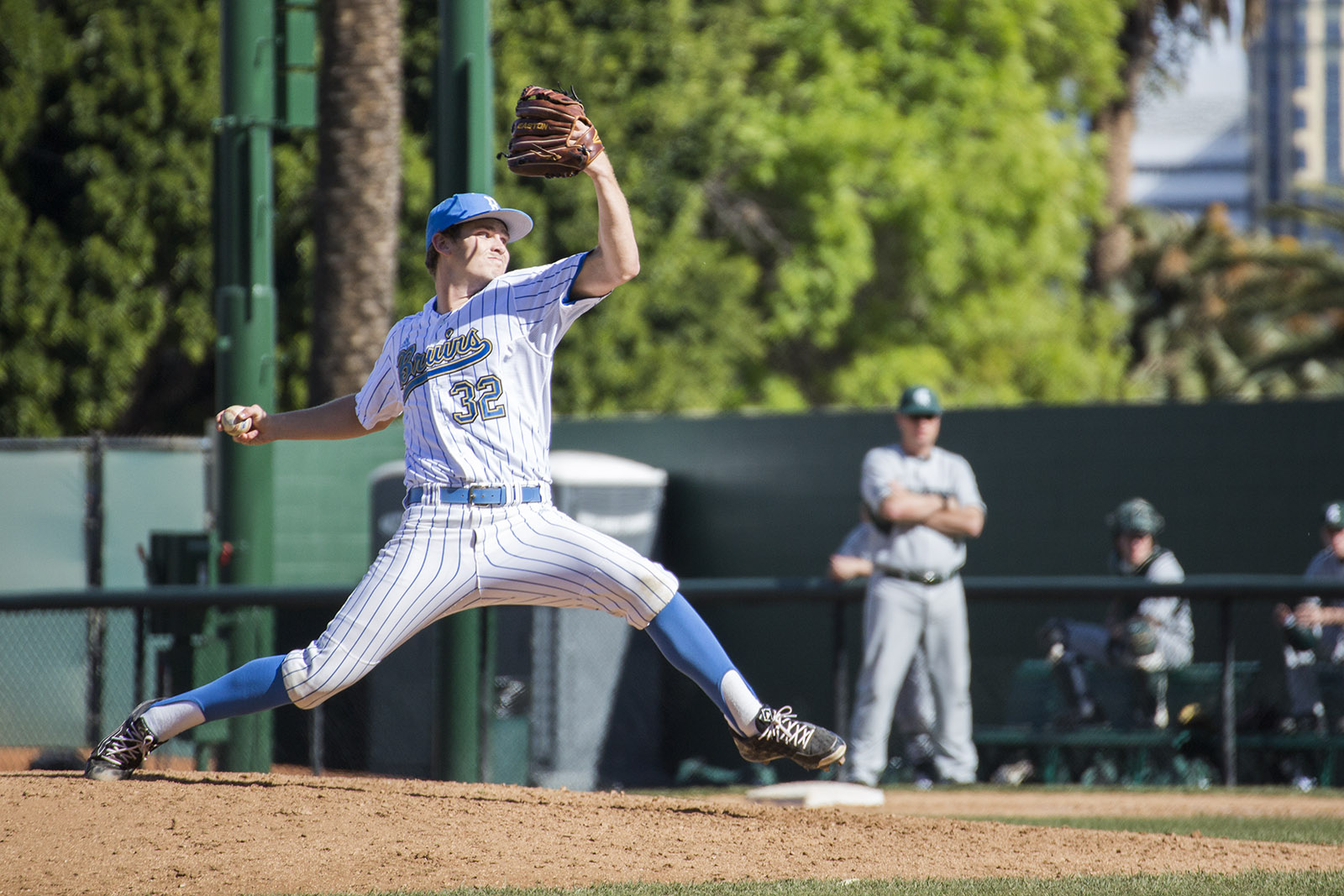 Grant Dyer almost saw his baseball career end in the blink of an eye.

The incident occurred in 2012, during Dyer’s junior year at Dana Hills High School. Dyer, pitching at the time, ran toward first base to back up the tail end of a double play. Next thing he knew, the ball struck him in the face.

“(I) shattered everything, had to replace a bunch of bones with metal and stuff,” Dyer said. “I was off the map for almost a year … because they had to do all kinds of reconstructive surgeries. It was a long ordeal.”

Some doctors advised Dyer never to play baseball again, but Dyer never considered quitting. Even with his eye swollen shut, he still played catch in the backyard with his dad.

“I was pretty determined that I was going to come back,” Dyer said. “It was never really a question to me.”

After eight weeks, Dyer was finally medically cleared to play baseball again. After that, it was game on.

Dyer emerged as a standout high school pitching prospect in 2013, posting a 1.24 ERA in 62 innings pitched. He earned a scholarship offer from UCLA in April 2013 – his first scholarship offer – and took it right away.

“UCLA was my first offer, which was awesome, because that was my first choice,” Dyer said. “So that’s hard to beat.”

Less than three years after signing, Dyer is the No. 1 starting pitcher on the No. 9-ranked UCLA baseball team, slated to start the 2016 season opener Friday night against No. 16 North Carolina.

The junior right-hander said he’s personally surprised how it all turned out. If you’d asked him five years ago, he would never have thought he’d become UCLA’s No. 1 starter. Dyer will now follow in the paths of decorated former No. 1 starters James Kaprielian, Adam Plutko and Gerrit Cole – each of whom were selected in the first six rounds of the MLB draft.

“It (has been) kind of a surprise. I committed really late, my senior year,” Dyer said. “Once my injury happened, I focused more on pitching – that’s kind of where my future was.”

Pitching may be the occupation for Dyer’s future as well. In this offseason, his fastball velocity has jumped from the 88 to 91 miles per hour range to 91 to 93 miles per hour range, according to coach John Savage. Aside from that, Savage said that Dyer has a curveball that is already major-league ready right now.

“Dyer’s stuff has significantly jumped,” Savage said. “His fastball is plenty, (and) his curveball is major-league average. … Dyer’s curveball, you know, the biggest thing right now is just (finding out how to) catch it.”

Dyer follows the likes of Kaprielian and another former No. 1 starter for the Bruins – Rob Rasmussen – in that he’s transitioning from a bullpen role. Last year, Dyer was UCLA’s eighth-inning pitcher, or setup man, and earned First-Team All-Pac-12 honors with an ERA of 1.83 and a strikeout rate of 1.1 per inning.

“(Last year), we won 45 games, were the No. 1 seed in the country, and a lot of that had to do with our bullpen,” Savage said. “(Dyer) took a sizable leap last year. He was a closer pitching in the eighth (inning).”

But as good as Dyer was in his relief role, Savage said that he always knew Dyer would become a starter this season. The only reason Dyer wasn’t a starter last season, Savage said, was because UCLA had an overload of starting pitchers returning from the season before. Three of them – Kaprielian, Grant Watson and Cody Poteet – went on to be selected in the 2015 MLB draft.

“They were all the starters from the year prior, and they all came back,” Dyer said. “The role I fit best last year was setting up for (David Berg), which was good.”

What Savage sees for Dyer this year, however, is for him to be that go-to guy on Friday nights. Savage said that he needs an experienced, strikeout-throwing guy in series openers, and that Dyer offers both of those things. Plus, Dyer has experience of starting 11 Tuesday night games as a freshman.

“He’s just ready,” Savage said. “He pitched as well as anyone we have this fall and in January.”

If you ask Dyer, he’s been ready for this moment since the end of last season. He was on the losing end of UCLA’s season-ending loss to Maryland in the NCAA Tournament – his lone start of the 2015 season – and he wants to quell that memory as soon as possible.

“Everyone that was there feels it. It doesn’t go away,” Dyer said. “Especially, personally, to me, because I got the start that Monday game, that final game of the series. So it hit home pretty hard for me because we really wanted that one.”

Dyer will finally get his first chance to bounce back on Friday night.