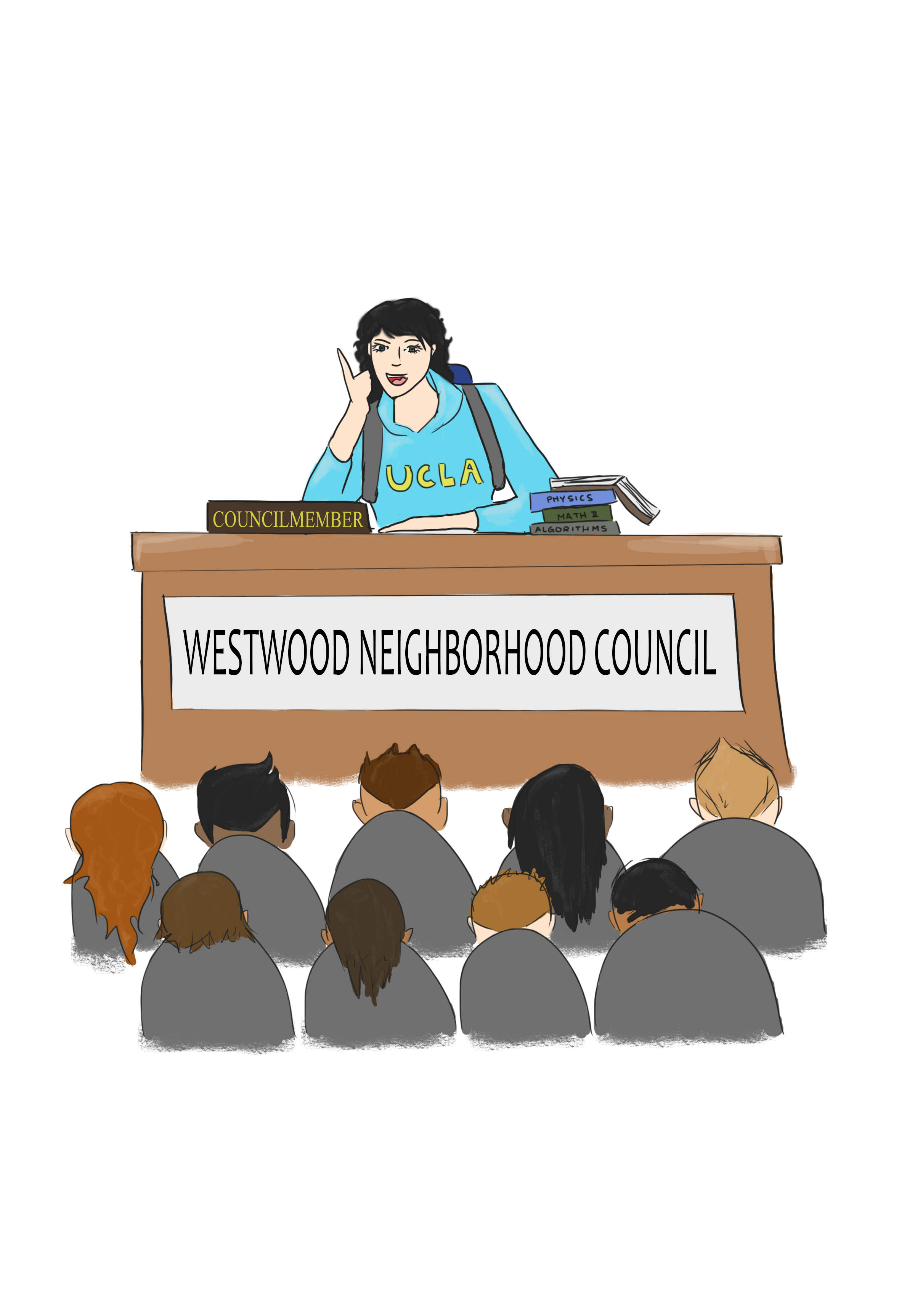 The original version of this article incorrectly implied that only two students sit on the board for the Westwood Neighborhood Council. In fact, three students, two being undergraduates and one being a law student, sit on the board.

With cracked sidewalks, dull lighting and an uneventful calendar, Westwood needs to be revamped.

Before Third Street Promenade and The Grove arrived, Westwood Village was the place to be.

When my father lived in West Los Angeles and spent his weekends with his cousins in the Village, they’d walk down Broxton Avenue where local high school and college students would “cruise” their decked-out cars around the block.

There would be night bazaars on the weekends where artisans sold their work. But today, the village is in a lull.

The Westwood Neighborhood Council, a key force in bringing an end to this lull, and, more specifically, the advisory board to the Los Angeles City Council, are known for their neglect of student voices in the past. Rather than aiming to create a more student-oriented town based on the reality of the population’s wants and needs, WWNC has become a platform for a small and non-representative community that doesn’t advocate for student issues.

In the past, this was less of an issue because student representation was higher within the WWNC. Elections in 2014 resulted in five students elected. Yet, for the 2015-2016 school year, only two undergraduate students sit on the board – Jacob Finn, a fourth-year psychology student and Ian Cocroft, a fourth-year political science student and the Undergraduate Students Association Council’s facilities commissioner. While two is better than none, more student representation within the council is something that needs to happen.

Students should tackle this issue head-on by applying when registration for candidacy opens on Feb. 21, which determine elections this upcoming June. Of the 19 seats up for election, students qualify for up to 14. Taking on the commitment of being on the WWNC, which requires one mandatory monthly meeting at minimum, UCLA voices will have a stronghold in an community organization that advocates for the safety and betterment of Westwood.

While we may not be able to “cruise” down Broxton Avenue in our cars, we can still recreate those bazaars and markets where student artwork could be shared and performances could take place. We could make a list of events that correspond with student events, such as Parent’s Weekend and the UCLA-USC football game, where Westwood businesses partake in the fun, from discount-dinners for families to offering up items for raffle. The city can and should be a bigger part of UCLA culture.

With $42,000 in the bank, the WWNC should be able to implement programs like these. But thanks to poor representation, such initiatives are often not brought up or simply ignored. And even more important issues of safety and business concerns that affect students are neglected.

The North Village has remained poorly lit for years, despite students reaching out to the WWNC about how this is an issue of safety for many Bruins living in the apartments there. Tree roots have cracked sidewalk slabs into chunks, both a safety concern and a concern of attractiveness for residents. These issues often go unnoticed despite student representatives calling for an address of concern from the WWNC.

Another major concern among students is the need and want for venues that reflect the desires of the students in their early twenties, such as clubs and bars.

But the non-representative board of primarily older men is very against allowing businesses to have liquor licenses, preventing college-oriented businesses from starting, said Finn.

By replacing these unessential voices on the board with a younger and more representative council, major steps can be taken to address students’ concerns. But as of now, the two student voices on the council are hushed by the 17 other members calling for equal representation.

When contacted for this piece, Lisa Chapman, vice president of WWNC, did not respond.

The benefits of bettering Westwood by means of proper representation would outweigh the potential costs of ostracizing those who oppose this sort of council.

Acknowledging the concerns of students can result in stronger and more successful businesses, an increase in visitors and tourists and a better atmosphere for younger residents, because Westwood will become a place that the majority of its population enjoys and explores. Diddy Riese is not enough to keep citizens happy and tourists coming. Westwood is getting old, and a younger voice could lighten it up again.

True Bruin pride can and should radiate down Broxton Avenue, Weyburn Avenue, Gayley Avenue, Kinross Avenue and Lindbrook Drive. We are a major part of Westwood, and unless we make that known, no one else will.