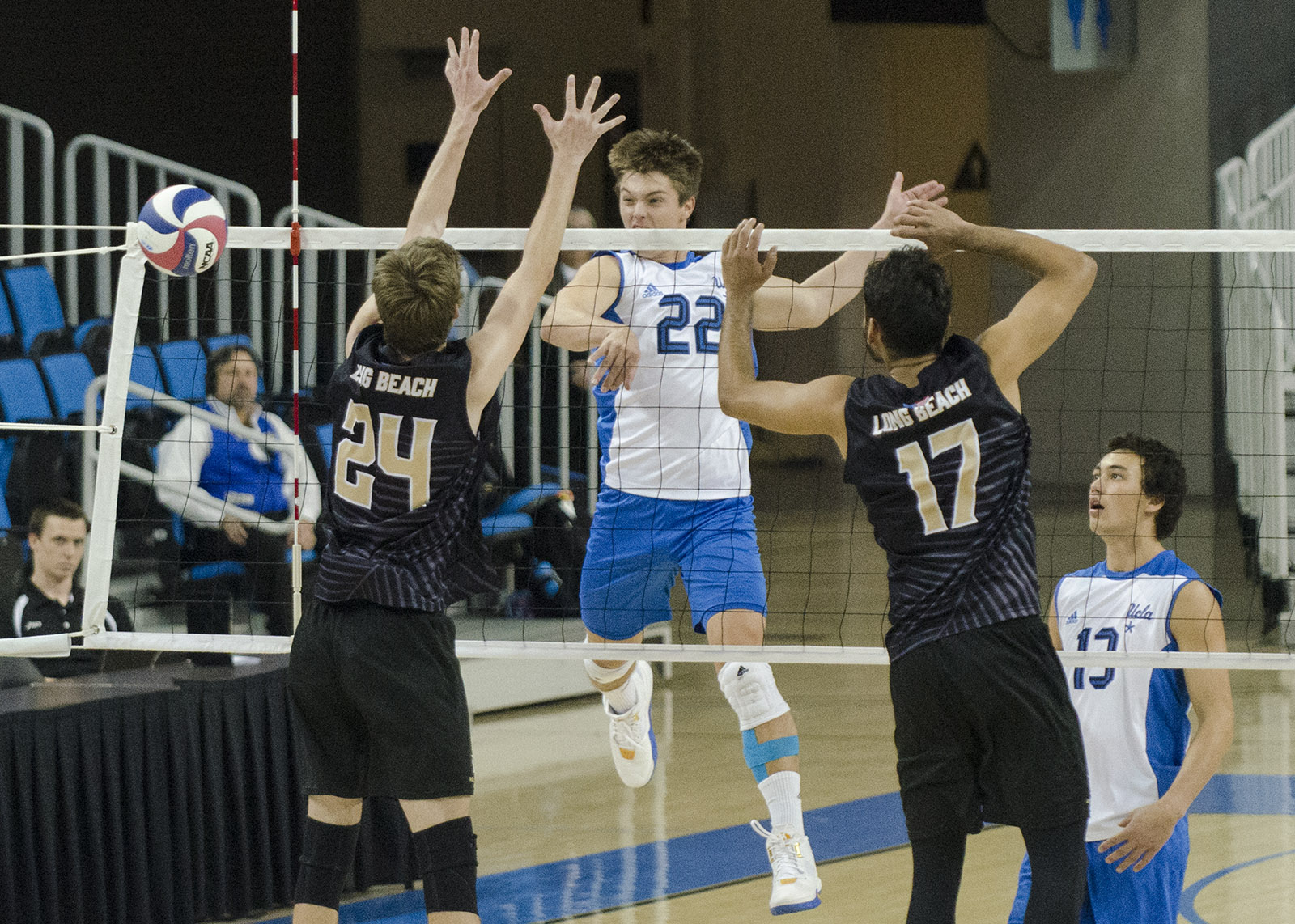 Junior setter Hagen Smith, who leads UCLA in assists and ranks fourth in kills, has helped the Bruins transition to a 6-2 offense this year. (Jiahui Zhou/Daily Bruin)

The UCLA men’s volleyball team isn’t satisfied, but that’s nothing new. What is new, though, is the outlook of a reinvigorated program.

In a 2015 season characterized by youth and inconsistency – plenty of losses, too – the Bruins weren’t content with their play on the court. But the team never found answers, spiraling into frustration as it was unable to string more than two wins together during conference play.

Things changed dramatically in 2016, in no small part thanks to the team’s 10-match win streak to open the season.

With that confidence boost came a new focus.

“We have some nice leadership on this team. Guys communicate really well, guys are feeling like they’re a good team, so they’re invested in understanding that next step of becoming a great team,” said coach John Speraw. “So maybe we have the physical elements and the physical skills where we need to, now let’s take that next step about how we’re going to mentally be a great team.”

Volleyball, specifically, offers its own challenges within the realm of intangibles.

“You reset after every set,” said junior middle blocker Mitch Stahl. “It’s not like basketball where you get up by 40 points in the first half and you can kind of coast. You’ve gotta reset and be able to win three within the five.”

So far UCLA (11-1, 7-1 Mountain Pacific Sports Federation) has been able to scrape out victories even if it takes the full five sets, most notably in a Jan. 27 matchup with Long Beach State. The then-No. 1 Bruins found themselves in a 2-0 hole before clawing their way back to overcome the then-No. 2 49ers.

Those comeback wins were nearly nonexistent a year ago.

Only once last season did UCLA lose the first set before snagging the victory – a 3-1 win against Cal State Northridge in early March. Otherwise, an opening loss guaranteed a match loss.

It’s still early in 2016, but the No. 2 Bruins have already stormed back from a first set deficit three times. Most recently, it was in the second match of the team’s trip to Hawaii over the weekend after UCLA dropped set one.

“We really didn’t kick in to where we play our best volleyball until the end – the fourth and fifth sets,” said junior setter Hagen Smith. “So it’s all about being totally dialed in mentally, being in the right mindset will help us.”

Those final sets weren’t all that close, as the Bruins outscored the Rainbow Warriors 25-18 and 15-9 to snap Hawai’i’s 17-match home win streak, silencing a raucous crowd at Stan Sheriff Center.

For Speraw, handling those pressure moments is a learned mental skill – one that he said is particularly important because the teams at the top of the heap are physically even. And, 11 matches into the year, UCLA has shown that it’s certainly part of that group.

“I have a sense that this team is very much open to that conversation (about mental improvement) now that we’re there,” Speraw said.

Despite a lack of seniors on the roster, the Bruins have begun to form their own identity as a team that plays with the intelligence of a veteran squad. The duo of Smith and freshman setter/hitter Micah Ma’a anchors UCLA’s dynamic and challenging 6-2 offense. Early success aside, the new system offers room for improvement as the team continues to adjust.

“I think it’s really important not to get satisfied with where we are,” Smith said. “We started off really strong and it’s probably one of the easier things to just flip a switch and coast, but we always have to get better.”

The Bruins will return to play Thursday night when they host the No. 12 UC Irvine Anteaters (3-8, 2-7) at Pauley Pavilion. The matchup will be the second time the two teams have faced each other this season, with UCLA cruising past its conference rival in four sets just under a month ago.