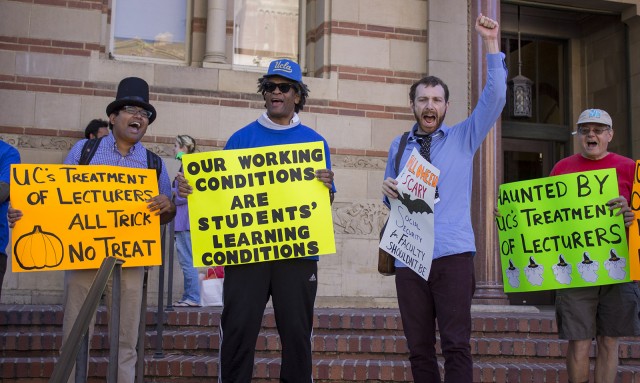 Lecturer union members and other supporters gathered on the steps of Powell Library in October 2015 to inform students about contract negotiations between the union and the University of California. (Daily Bruin file photo)

The University of California and its lecturers’ union reached a formal agreement Friday to increase lecturers’ salary by about 6 percent over the next six months, among other changes, concluding contract negotiations between the two parties after seven months.

The union also negotiated other agreements in the memorandum with the UC Office of the President, UCLA and UC San Diego to guide departments toward the best practices for appointing and reappointing lecturers, according to the union’s website.

Union members must vote to ratify the agreement to make the contract legally binding.

The lecturers’ contract originally expired in June, but the union agreed to extend it to October while negotiations with the UC continued. The union decided against extending the contract again on Dec. 11, calling for the UC to bargain in “good faith,” or fairly. The final round of negotiations began Jan. 19.

Representatives from the union said in October their goals for contract negotiations included better salary and benefits, more protections for lecturers who have not received continuing appointments and more influence over educational policies.

Some lecturers who are not covered by the University of California Retirement Plan, and thus do not receive social security or retirement benefits, will receive an additional payment in July 2017, equivalent to 5 percent of their base salary in the 2015-2016 academic year. To qualify, lecturers must have taught at least six quarters or four semesters and need to be hired for at least one term in the 2016-2017 academic year. The UC will dole similar payments in July 2018 and 2019.

The memorandum also provides better processes and offers more protections for the lecturers during excellence reviews, which assess their teaching and performance. Lecturers who have not received continuing appointments will have a right to teach future classes if he or she is deemed excellent, similar to the two-year reemployment rights that lecturers with continuing appointments are given.

UCLA, the UCOP and the union’s statewide leadership and local union leaders will also meet to improve how they reappoint lecturers who have not yet taught for six academic years in seven UCLA departments, including history, psychology and mathematics. A working group comprised of members from the union and the UC will meet over the next four years to discuss the reappointment of non-continuing lecturers.

Union members will vote online to ratify the agreement during the last full week of February.