Men’s volleyball bounces back in second game win over Warriors 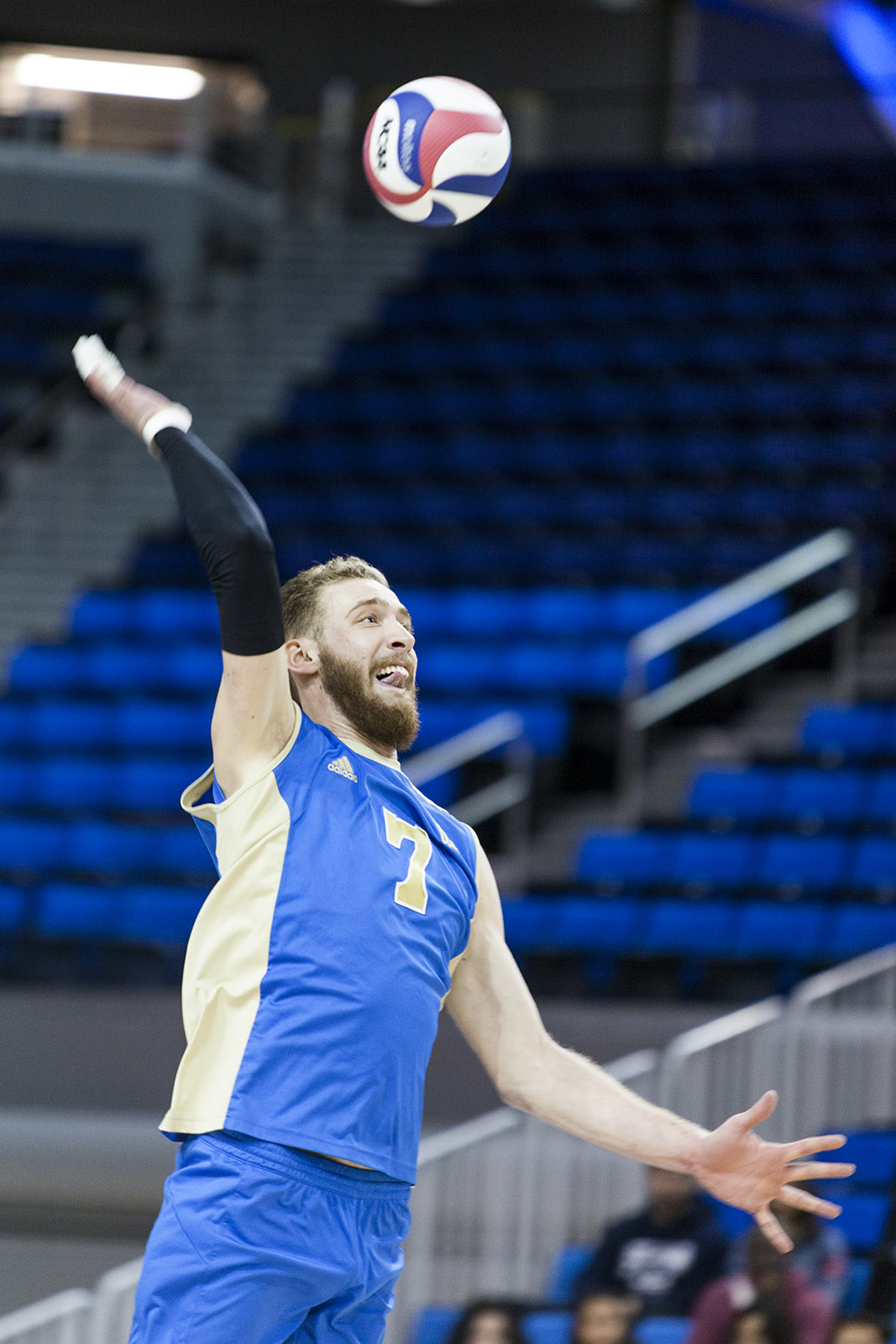 The UCLA men’s volleyball team experienced something new in Hawaii – its first loss of the season.

The Rainbow Warriors hit a respectable .273 hitting percentage compared to the Bruins’ season-low .138, with two players carrying the entirety of their offense.

Freshman opposite Stijn van Tilburg and senior outside hitter Sinisa Zarkovic had 21 and 15 kills respectively. The two European imports also maintained a hitting percentage above .375 for the game.

Errors were what really hurt the Bruins. UCLA committed 27 errors compared to UH’s 15. Those mistakes not only gave UH free points, but also slowed any momentum for the visitors, clogging up any consistency and dampening their offensive firepower.

On top of that, a noticeable absence was sophomore outside hitter Jake Arnitz as he was pulled early in the game.

“He wasn’t playing particularly well (Friday),” said coach John Speraw. “It was just a matter of finding the best combination of guys on any particular night and we have quite a bit of depth at outside hitter so if one guy isn’t doing well, we can go to the bench.”

In the end, two stellar player performances from Hawai’i allowed them to pull away with their 17th straight home-court victory.

Saturday was a different story.

“I’m certainly pleased with the way we responded after the loss,” Speraw said. “I think we did a nice job in defensive tendencies and we had some really nice efforts from a number of guys.”

For one thing, UCLA’s offense was clicking. Freshman setter Micah Ma’a had a career high 18 kills at a .500 clip while Arnitz added on 13 of his own – all while hitting .310. Junior setter Hagen Smith added 30 assists.

“In Hawaii you play for your family,” Ma’a said. “It’s tough seeing them cheering for you in front of all their friends. And of course they’re proud, but it’s a little different when you lose, so I just wanted to try and give my best effort for them.”

As a team, the Bruins turned their season-low offensive performance around as they hit .374 throughout the match.

The errors game was flipped as UCLA only committed 16 to UH’s 29.

Contrasting UCLA’s well-rounded team effort, UH once again saw major production from the same two players. Van Tilburg had 17 kills and Zarkovic posted 20, but both could only muster a sub .200 hitting percentage.

UCLA’s massive blocking front allowed the Bruins to snub UH’s dynamic hitting duo. The Bruins were out-blocked in the first game 9.5 to 13.0, but a 19.5 to 4.0 differential on Saturday was a huge factor for the Bruins.

Junior middle blocker Mitch Stahl was a catalyst for the team, especially on the blocking front. Stahl matched his career-best with nine block assists and two solo blocks.

“We really dialed it in,” Stahl said. “We were really disciplined with our blocks, we were really fundamental, we knew the game plan and we executed when we needed to.”