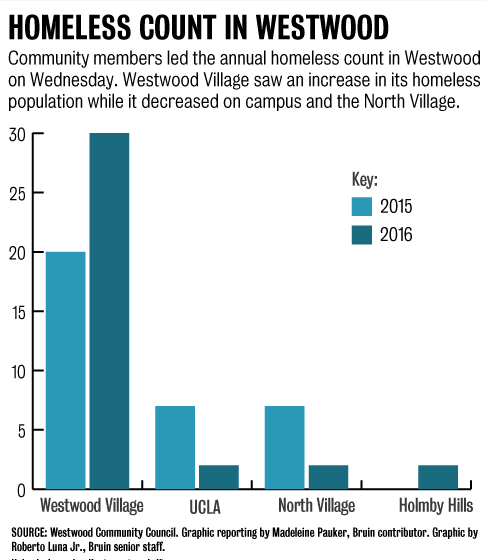 Volunteers walked the streets of Westwood to count the homeless population, as most residents left the Village’s restaurants and hookah bars.

More than 50 Westwood community members counted 115 individuals, vehicles and shelters in the area bordered by Santa Monica Boulevard and Highway 405, up by 31 from last year. Westwood officials organized the count, which took place early Thursday, as part of a nationwide program that conducts a census for the federal government.

Fourteen groups of two to four volunteers walked or drove through 14 Westwood districts to count the number of homeless individuals. If volunteers could not see individuals in encampments or vehicles, they only counted the shelters.

Organizers said they decided to start the count two hours later this year at 11 p.m., when most individuals are settled in for the night, to achieve a more accurate count.

Los Angeles County has seen a 12 percent increase in homelessness since 2013.

The nationwide count was previously held every two years, but is now held annually, in response to a national rise in homelessness, said Steven Sann, chair of the Westwood Community Council. Cities send the census data to the federal government, which uses the data to make policy decisions, Sann added.

Sann said he thinks Los Angeles’ increasing disparity between high housing costs and less-than-average wages for a large city, and the count’s more accurate starting time were the main reasons for the increase.

Many UCLA students, some of whom learned about the event through the Volunteer Center, participated in the count.

Tanner Kelly, a fourth-year political science student, said he volunteered for the count because he thinks providing information to the government leads to more tangible changes.

“Those numbers are directly tied to our funding,” he said. “Homelessness is a big issue in Westwood, and you see it everywhere you go.”

Thomas, executive director of the Westwood Village Improvement Association, also known as the BID, said about 12 homeless individuals in the Village are “anchor homeless” individuals who have been in the area for several years.

The group walked down every street and alley in the Village, and quietly recorded each homeless individual or shelter it passed. Volunteers watched a training video before conducting the count that instructed them to carefully evaluate each person’s appearance, physical condition and behavior to determine whether he or she was a homeless individual.

Event organizers instructed volunteers not to approach the people they recorded, but many homeless individuals greeted members of the group.

“In a lot of cases, we know their names, alias or nickname,” Thomas said. “You feel like you know their histories, who their families are and what their problems are.”

Thomas said the BID also conducts independent quarterly homelessness counts in the Village and refers individuals to People Assisting the Homeless, a group that aims to connect homeless individuals to housing, food and other services.

The agency recently worked with the BID to house an individual who was homeless in Westwood for 13 years, Thomas said.

“After consistently (being asked) ‘Is today the day? Do you want a change in your life? Are you tired of this lifestyle?’ one day, he was,” Thomas said.

He added the individual, who was able to connect with housing and now has a job, came to an annual BID meeting to speak about his experiences.

“I wish we had more success stories like that, but (I know) our outreach workers do an amazing job,” Thomas said.

“(Homeless individuals) are very at risk, especially with El Niño,” Sann said. “We need to reevaluate our efforts to see what’s effective and not effective in assisting them.”