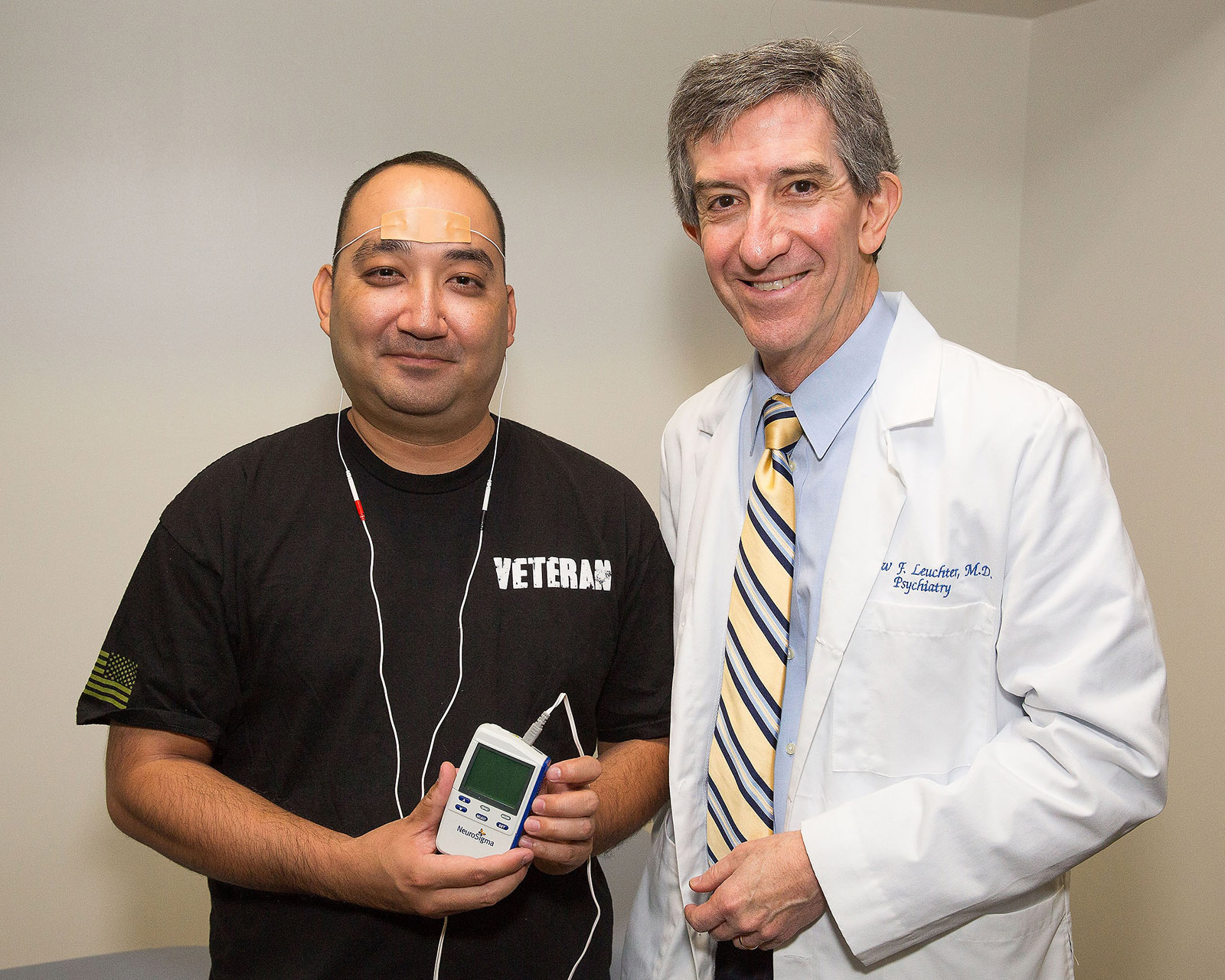 Sleeping and going out with his family were not easy for Ron Ramirez, a 38-year-old veteran whose military service trained him to act on instinct.

In 2006, a roadside bomb in Iraq left Ramirez with a traumatic brain injury, night terrors and a quick temper. But now, Ramirez said he’s hopeful because his symptoms have become less severe or have disappeared altogether after participating in a new study for veterans with post-traumatic stress disorder and major depressive disorder.

UCLA researchers announced last Thursday they are studying the effectiveness of the NeuroSigma Inc. electric patch, a box about the size of a deck of cards. Patients can use it to self-administer trigeminal nerve stimulation, or TNS. Neuromodulation published a study Thursday that concluded the therapy significantly reduces symptoms in veterans with PTSD and major depressive disorder.

Since their research began about a year ago, UCLA researchers have already completed the eight-week treatment process with some veterans, including Ramirez. They are currently recruiting veterans who have served since the 9/11 attacks and aim to study 74 individuals.

Researchers will collaborate with the VA Greater Los Angeles Healthcare System, a system of hospitals for veterans, to recruit veterans for the study, said Andrew Leuchter, director of the Neuromodulation Division of the UCLA Semel Institute for Neuroscience and Human Behavior and a psychiatry professor.

Ramirez said he was frustrated during the first two weeks because he had to adjust to the device and its electric pulses, but he began to sleep better and feel less nervous during the third week.

Ramirez said that prior to using the electric patch, going out was difficult because his stress levels would be too high. He added he felt the impulse to interfere when he saw things that made him angry, but knew he shouldn’t.

“I saw things I didn’t like and would try to do an on-the-spot correction like they trained us to do in the military,” Ramirez said. “But you can’t do that in civilian life.”

After the sixth and seventh week of the study, he said he wanted to go out more and spent more time with his daughters.

Leuchter said researchers tested the NeuroSigma device in addition to other therapies veterans were already using because PTSD symptoms are so severe. He added they wanted to see if TNS therapy could help patients who found other available treatments ineffective.

Ramirez said he used the electric patch while taking his regular medication and going to anger and stress management sessions. He added he thinks it was the combination of these treatments that helped him so much.

Leuchter said he and other researchers may look into using TNS as an individual therapy in the future if clinical trials are successful. He added some subjects have relapsed for both depression and PTSD after discontinuing use of the device, but the majority of patients have done well.

“These can be lifelong, recurring illnesses,” he said. “Unfortunately once you’ve been ill, there’s always a risk for recurrence.”

“We realized the trigeminal nerve connects to parts of the brain that are very important to functions like paying attention, regulating sleep, regulating mood,” Cook said. “By sending these gentle electric signals, the nerve then fires and sends its own signals into the brain.”

Major bundles of trigeminal nerve endings lie near the surface of the skin and are safer to stimulate than other nerves, he added.

Leuchter said TNS therapy is an approved treatment for epilepsy and depression in some countries such as Canada, but still needs to be tested more rigorously before the U.S. Food and Drug Administration approves it.

He said he hopes the current study will help encourage other research necessary for FDA approval, but its primary goal is to further research on TNS therapy’s effectiveness, how the treatment works and what specific effects it has on the brain.

“These are people that had chronic, unrelenting symptoms even though they had the best treatment available,” he said. “The fact that we were able to help them was enormously rewarding.”

Ramirez said he was originally afraid he would relapse after he stopped using the device, but hasn’t.

“Before I was just an a-hole all the time,” he said, laughing. “My family says I’m a lot nicer now.”

Leuchter said the study will continue over the next two or three years.