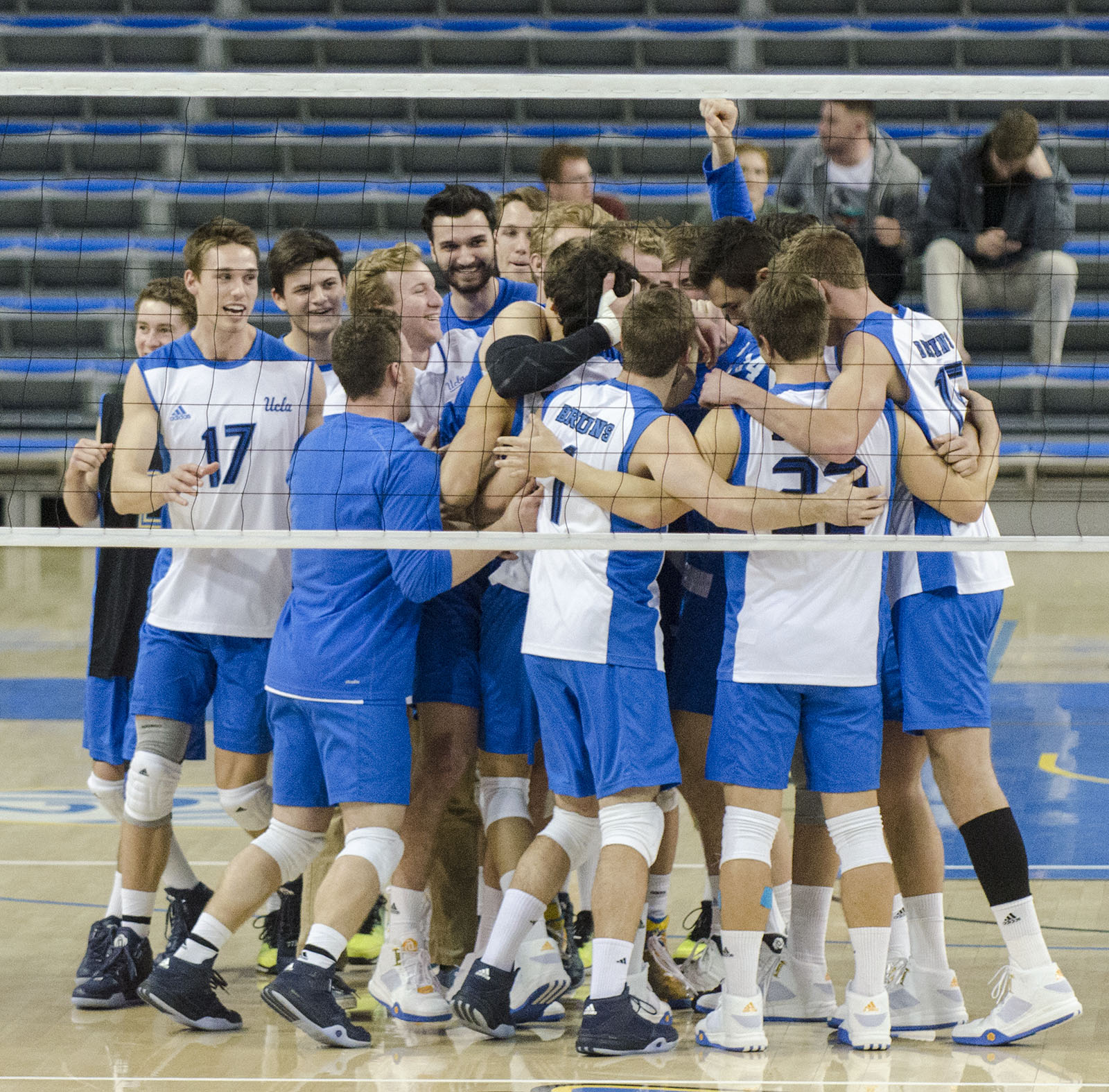 The No. 1 UCLA men’s volleyball team remained undefeated with a come-from-behind win over No. 2 Long Beach State. The Bruins were down two sets to none before they won three straight. (Jiahui Zhou/Daily Bruin)

UCLA’s position on top of the college volleyball world came into question Wednesday night. The Bruins found themselves in an early 0-2 hole against Long Beach State, but, in the end, all that deficit did was allow the Bruins to prove themselves as they battled back for a victory.

“We have great voices on the court, and there are guys who feel very passionately about what we can do on the court,” said coach John Speraw. “They keep the guys moving forward and focused. We got a great group of guys that are doing it the right way and I’m having a blast coaching them.”

Throughout the night, service aces were difficult to come by and service errors proved to be the bane of both teams. UCLA committed 22 errors and five aces, while LBSU had 19 errors and only one ace.

In the end, though, it was an ace that allowed the Bruins to win the final point, as freshman setter Micah Ma’a placed one in the corner to take the match.

“I personally could not get the ball over the net (earlier in the night),” Ma’a said of his serving. “I was just trying to go back and get the ball in. I think it helped a lot for a bunch of us to change our mindset – maybe we should lay off the scoring and just worry about them trying to score on us.”

Sophomore outside hitter Jake Arnitz led the Bruins in three stats, with 17 kills, an outstanding .429 percentage and 13 digs. Ma’a and Smith combined for 55 assists and 22 kills.

Two freshmen carried the 49ers – outside hitter TJ DeFalco had a game-high 21 kills and setter Josh Tuaniga pilled on 46 assists.

The first two sets were defined by close scores and back-and-forth play, but the Bruins fell both times.

In the third set, the tide shifted as the Bruins’ leaders helped get their team back into drive with a convincing 25-19 victory.

“These guys (are) so mature,” Stahl said. “We trust each other out there. We don’t have any doubt. When we were down 2-0 I knew we were going to come back and make it a five-set match because that’s the mentality that we have.”

The fifth set was one of inches.

Six points came on line calls, some of them questionable, and four of the Bruins’ points were gifted by the 49ers in the form of service errors.

Stahl slammed down an overhead pass as the Bruins began to gain traction on the 49ers, only to see their lead disappear due to the aforementioned line calls.

With the game at 14-13, Ma’a stepped back to deliver a resounding final ace that flew with incredible power but floated with an air of caution.

As the floor squad celebrated on the court, the rest of the Bruins charged out to join them.

“Everyone was a leader on the court tonight,” Smith said. “When everyone is into it, it’s hard to stop us.”