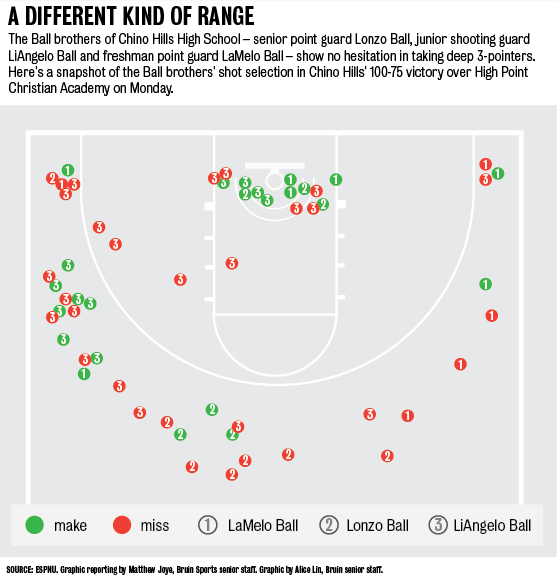 There’s a UCLA recruit who is currently changing the way high school basketball is played. His name is Lonzo Ball.

The five-star senior point guard from Chino Hills High School does not play a conventional brand of basketball. You can count on one hand the number of times he actually sets up a half-court offensive set during a game. In fact, Ball’s team only has three plays in its playbook, according to ESPN recruiting analyst Jeff Goodman.

Ball’s signature is different from most point guard prospects. Instead of a smooth jumper or a tight spin move, Ball has a 75-foot outlet pass – thrown with the form of a baseball outfielder.

“He, more than any other player in this (2016 recruiting) class, has a trademark to his game, with that baseball-style pass,” said ESPN high school basketball recruiting analyst Jeff Borzello.

Ball leads a Chino Hills team that has both puzzled and dazzled pundits across the country this year. The Huskies are 18-0, with wins over some of the most prestigious teams in the country – such as Montverde Academy from Florida, and Patrick School from New Jersey. They’ve won their games with an unconventional run-and-gun style, first employed by the 1989-1990 Loyola Marymount Lions, who set an NCAA record by averaging 122.4 points per game.

Chino Hills has scored more than 100 points in 10 of its 18 games so far, often taking 10 seconds or less on each possession. In the Huskies’ offense, the quickest shot is often considered the best shot; the quantity of shots is valued over the quality of shots.

“A lot of people call (the Chino Hills offense) a gimmick, and maybe it is,” Borzello said. “It’s always leaking one guy out (on a fast break), so you have ‘cherry picking.’ But … they’re doing it to the best teams in the country, against guys that have coached the college game.”

This helter-skelter style has left scouts and analysts in a polarizing frenzy. They don’t know what to make of the five-star UCLA commit, who routinely takes 30-foot shots as if they’re 15-foot jumpers. In Chino Hills’ offense, 30-foot jumpers and full-court outlet passes are the norm, but they are hardly standard in major college basketball.

“I’m just fascinated by the whole thing. It’s such a unique operation – just the way (Chino Hills) plays, the style of play,” said Adam Finkelstein, a national scout for ESPN high school basketball recruiting. “The question you have to ask yourself is: ‘How does that integrate with what UCLA does? How much rope is UCLA going to give (Ball) to play the way he wants to play, and to play the way he’s used to playing?’”

Ball certainly has talent – as evidenced by his 15-point, 10-rebound, 18-assist performance against High Point Christian Academy on Monday – but the way he plays causes analysts to scratch their heads at times. There were six instances in Monday’s game where Ball took a 30-foot 3-pointer with several seconds still remaining on the shot clock.

“I don’t think you can go to UCLA, take a dribble, and take a 3-point shot at that distance,” said ESPN national basketball recruiting director Paul Biancardi during the broadcast of Monday’s game on ESPNU. “Lonzo Ball is going to have to cut out some of his flashiness when he gets to the college level.”

Ball’s performance against High Point Christian wasn’t the most efficient, as his 15 points came on 15 attempts. Of his 10 3-point attempts, Ball only made three. He didn’t score once on a dribble-drive to the basket, and didn’t get to the free throw line once.

Ball’s two younger brothers – LiAngelo, a junior, and LaMelo, a freshman – picked up most of the scoring slack for Chino Hills in its 100-75 win over High Point Christian. But they also showed a lack of discipline in shot selection.

Lonzo Ball’s passing was the biggest silver lining of the game for Chino Hills. Not only did he provide a handful of his trademarked full-court baseball passes, but he also made a couple no-look zip passes while driving to the basket in the half court.

READ MORE: Why you should be paying attention to the Bruins’ bright future.

“One thing I love about Lonzo Ball – his head and eyes are up at all times,” said ESPN basketball recruiting analyst Reggie Rankin. “If somebody is heading out the side door, he’s going to see him.”

Ball’s vision and standout passing ability will certainly be welcomed in Westwood come this fall. The biggest question is whether his innovative, run-and-gun style of play will be welcomed as well.

“It’s really going to be interesting to see what (UCLA coach) Steve Alford does,” Finkelstein said. “He’s got to decide, ‘How much of this truly unique system am I going to incorporate into what I do at UCLA?’ … Do they leak out a guy every possession? They very well might. We’ll see it next year.”