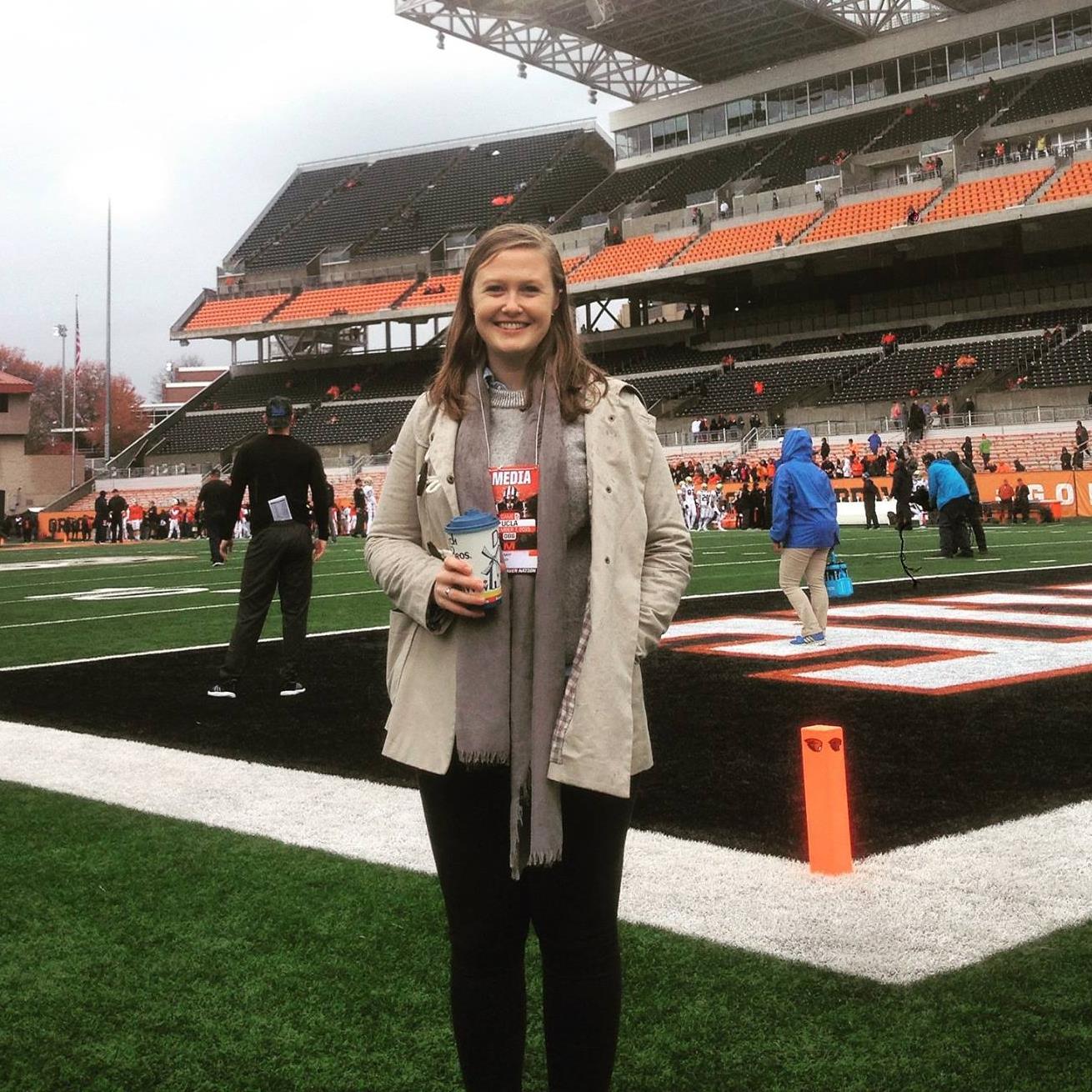 Editor’s note: With the college football season now over, Sports Editor Claire Fahy reflects on covering the popular sport from the sidelines as a student journalist rubbing shoulders with veteran beat reporters.

I remember everything about my first day on the football beat. I can tell you what I wore (blue and red flannel, Daily Bruin shirt), what time I woke up (6:30 a.m.), even what I had for breakfast (Jamba Juice – Caribbean Passion). The sky above Spaulding Field was a gloomy grey as the various position groups went through drills, but by the time 11-on-11 scrimmaging occurred the scorching LA sun had risen. I made a mental note to bring sunglasses next time.

The reporters on the sideline buzzed with anticipation, waiting to see Josh Rosen in action for the first time. Fans watched in awe as the kid launched spiral after spiral while I desperately scribbled notes and jotted down stats. Not all-too-familiar with the game of football aside from growing up a San Francisco 49ers fan, I was thrown head-first into a crash course on spread offenses and nickel packages.

Two hours and six pages of notes later, a single horn signified the end of the first practice of 2015. I followed the rest of the beat writers to the north end of Spaulding Field, where a blue backdrop denoted the press conference location. While players stretched and coaches conferred, I went over my notes to think up questions. Head coach Jim Mora eventually appeared dressed in his classic black-long-sleeve-with-black-shorts outfit.

Without any kind of notice, the other reporters – all male – closed in around the coach, sealing me off on the outside. I stuck my recorder under their elbows, desperately trying to pick up some sound bites. Suddenly, the NBC cameraman snatched the recorder from my hand, putting it up next to Mora alongside his microphone. Grabbing me by the forearm, he dragged me in front of him so I was front and center in the scrum. I didn’t manage to muster the confidence to ask Mora a question that morning – or any of the mornings, afternoons and nights that followed – but that NBC reporter taught me to assert myself despite my lack of experience.

That wasn’t the last time I would feel out of my depth over the next nine months, but it was a good introduction to the challenges that come with covering football. There were a lot of times when I would walk into a stadium press box and feel like I wasn’t qualified enough to cover football or that I didn’t deserve to be there. More than any late-run wrap or tight deadline, that was probably the toughest obstacle I faced.

There were more than enough pros, however, to offset that one con. Road-tripping up to San Francisco for the Stanford game, flying up to Oregon to cover a 41-0 blowout, exploring Salt Lake City before the Utah upset – it was never lost on me what an amazing opportunity covering UCLA football was. While I knew I took it for granted, I never wanted to take it lightly – every game I truly tried to do the team justice.