Men’s volleyball to test No. 1 ranking against Cal Baptist 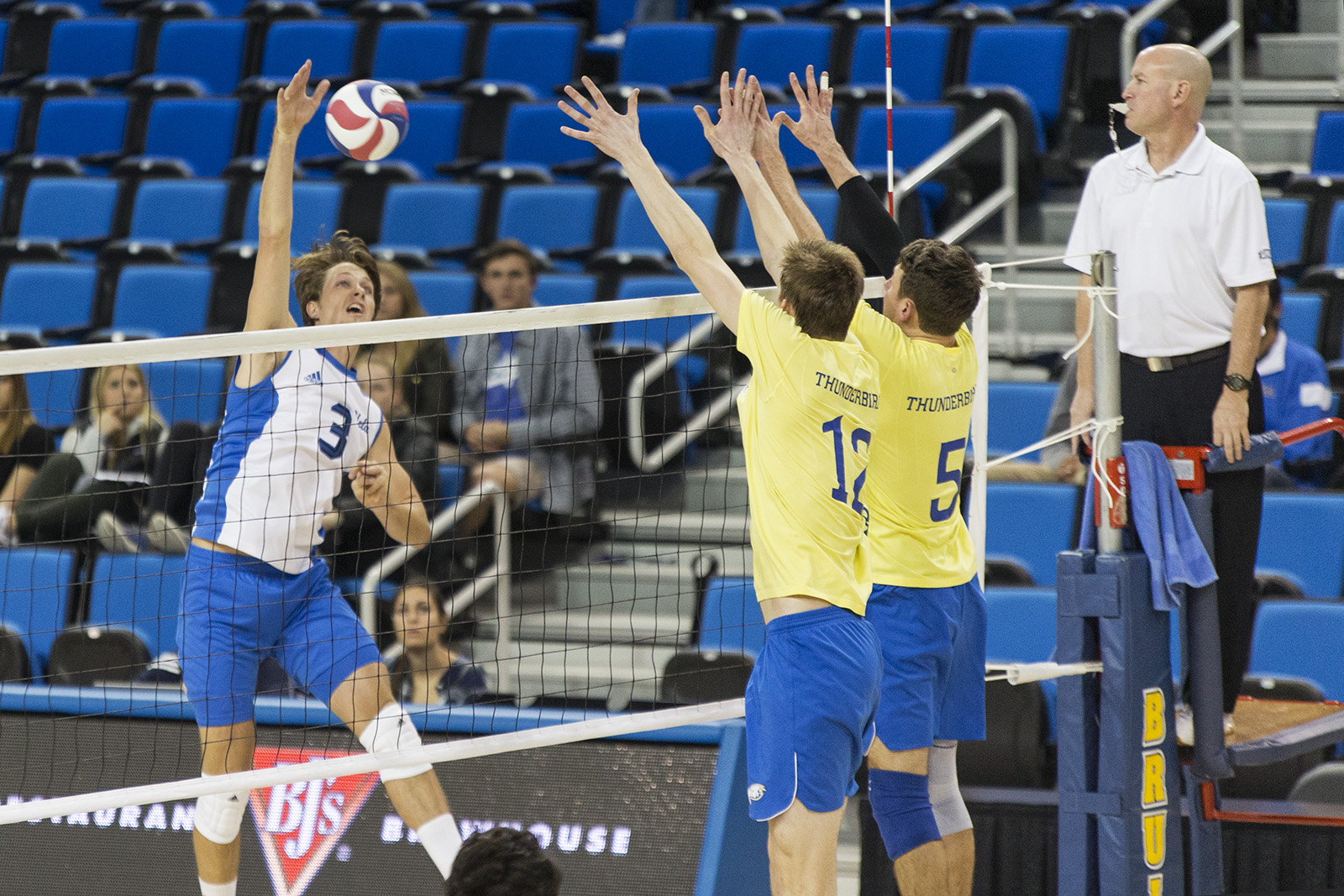 The Bruins improved to 5-0 after beating the former No. 2 UC Irvine Anteaters and the unranked UC San Diego Tritons over the weekend. (Aubrey Yeo/Daily Bruin senior staff)

The UCLA men’s volleyball team hit the road for the early portion of the 2016 season, but the Bruins haven’t seemed to mind the unfamiliar confines.

No. 1 UCLA (5-0, 2-0 Mountain Pacific Sports Federation) will try to complete an undefeated six-match stretch of road showdowns at unranked Cal Baptist (3-2, 0-2) on Wednesday night. UCLA is off to its best start since 2005, when it began 7-0 in what would become a NCAA runner-up season.

Despite their spot as the best in the country, the Bruins know just how unpredictable the early rankings can be. UCLA began 2015 ranked No. 5 in the country and rose to No. 4 after a perfect nonconference start. That was as high as the team would get, however, as a historically mediocre season led to the team’s steady decline in the national polls.

A two-week hot start rocketed UCLA from its season-opening No. 5 spot to the top of the nation this year. Highlighting the five wins was a four-set takedown of then-No. 4 UC Irvine. The victory was a stunning reversal following the Bruins’ 0-3 record against the Anteaters last year.

After the Friday win in Irvine, coach John Speraw and a number of the players emphasized caution in mid-January evaluations, citing a need for continued growth and improvement.

The Bruins will have a chance to work on any problems and try to extend their undefeated season in Riverside on Wednesday against the Lancers.

Cal Baptist began the year like UCLA with three nonconference victories, but MPSF play has not been as kind to the Lancers. Within the past week, they were swept by the then-No. 14 CSUN Matadors and lost in four sets to the then-No. 3 Long Beach State 49ers.

The Lancers lost outside hitter Jonathan Tuttle – a key veteran component – but otherwise return most of their attacking corps. A major difference so far in 2016, however, has been at setter. Last season, Cal Baptist relied on then-freshman Zachary Melcher, who contributed 854 assists and nearly nine per set in 2015 on his way to All-MPSF Freshman Team honors. This year, though, redshirt freshman Arturo Iglesias has seen the bulk of playing time so far, anchoring a slightly new-look system.

The Bruins were 2-0 against the Lancers last season, sweeping them in the first matchup and winning in four sets in the second. Junior setter Hagen Smith had 30 assists in the opening match but had suffered a season-ending injury by the time the teams faced each other again.

This year, with both Smith and freshman setter/hitter Micah Ma’a giving UCLA flexibility in its systems, the Bruins should be better suited to remain in control of the match.

Following the midweek conference showdown, UCLA will finally prepare to host its first regular season match – a rivalry game against underachieving USC (0-4, 0-2). The No. 15 Trojans, in stark contrast to the Bruins, are off to their worst start since 1970.