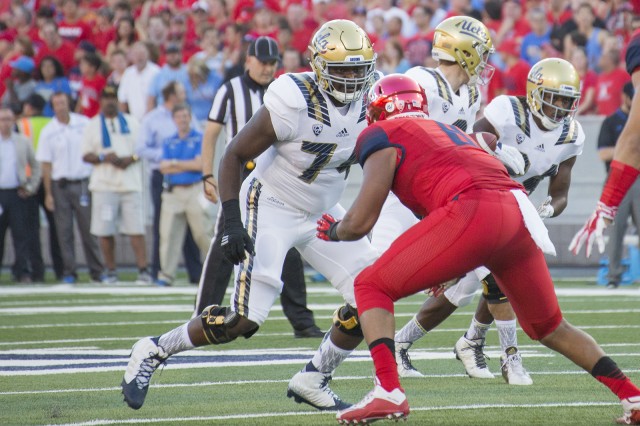 Junior receiver Thomas Duarte became the sixth UCLA football player to declare for the NFL Draft Tuesday. With three graduating players and six early enrollees, the Bruins lose a total of nine players to the pros this year. Here’s a look back at each early enrollee’s best play from the 2015 season.

Freshman quarterback Josh Rosen relied heavily on running back Paul Perkins this season – the redshirt junior picked up 1343 yards in 2015. His most show-stopping play came against Colorado Oct. 31, when Perkins took a hand-off from Rosen and sprinted 82 yards into the end zone.

Rosen identified Duarte as his go-to receiver early on in the 2015 season – Duarte finished with 10 touchdown catches on the year. One of his best touchdowns came on the road against Arizona, when the receiver made a one-handed catch and ran it 20 yards for a score. The touchdown tied the game, which UCLA went on to win 56-30.

Junior defensive lineman Kenny Clark distinguished himself in a lot of ways on defense this season, establishing himself as a legitimate pass-rush threat. One of his most fun plays of 2015, though, was in UCLA’s season opener against Virginia, when Clark caught a touchdown pass from Rosen.

Jack only appeared in one game this season before going down with a meniscus tear suffered during practice. Immediately following his injury, the linebacker opted to drop out of school in order to prepare for the 2016 draft. He was sorely missed by UCLA as the Bruins went 8-5 and struggled mightily to defend the run. Before he left, however, he managed to showcase his versatility, running in a touchdown against the Wahoos.

As a member of the offensive line, Benenoch has few gif-able plays as he is mainly charged with keeping Rosen upright. The junior was solid this season, however, especially as the line shifted around him due to injuries. Benenoch is on the Rotary Lombardi Award watch list, a distinction honoring the country’s best lineman or linebacker.

Honestly, the circumstances surrounding Redmond’s entry into the 2016 Draft are suspect, especially seeing how the offensive lineman missed a number of games this season and quit the program before the Foster Farms Bowl. As such, he doesn’t have any gif-able highlights or big plays worthy of mentioning in this post.

The bottom line is, UCLA loses a lot of talent heading into spring practice, when it starts to prepare for the 2016 season. Look out for big lineup changes and new names to hit the headlines.