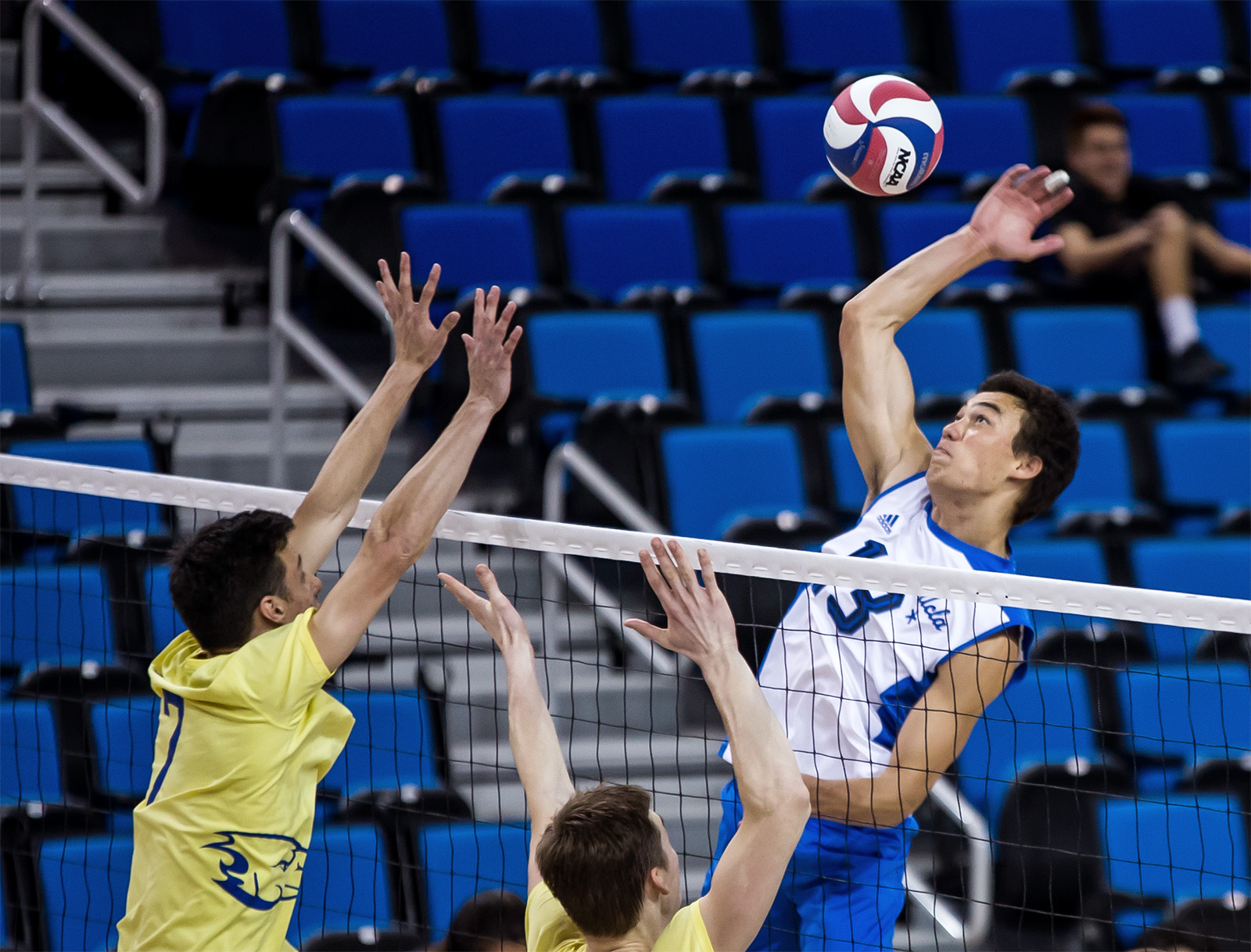 The UCLA men’s volleyball team is led by one of the top coaches in the sport worldwide, but the Bruins’ best teachers might be themselves.

Coach John Speraw, also the coach of the U.S. Men’s National Volleyball Team, said that the dynamic between junior setter Hagen Smith and freshman setter/hitter Micah Ma’a has been a big part of the 2016 season so far, especially in elevating the team’s level of communication.

“I think the most important thing for me is to let them create on their own, and give them some freedom to experiment and make mistakes and dialogue about it,” Speraw said. “Both those guys have been around the game for a long time and they have fun with it. What I’ve seen is that the dialogue and discussion has allowed our team to even develop more creative options out of this particular offensive lineup.”

Beyond just the court, though, the effects have infected the culture of the program.

“For me, it’s actually been fun to watch a couple of pretty savvy volleyball players go out and create the game on their own,” Speraw said. “And I think we have a lot of guys that have improved their overall volleyball IQ because of being in this type of environment.”

The results stand for themselves early in the season, as No. 2 UCLA (3-0) remains undefeated in preparation for the start of conference play this weekend. Ma’a said the Bruins are talented enough to continue adapting and improving as the year continues.

“(My role is) wherever I can fit,” Ma’a said. “We have a bunch of guys who can play the whole entirety of the game – they can hit left, they can hit right, they can do anything, really, on the court. I think trying to gel as a team with that many great volleyball players, it’s just us trying to do what we can do, bring what we can bring and go from there.”

While not alone in their contributions, Smith and Ma’a have provided a core stability to the team that was largely missing in 2015. Injuries decimated the Bruins at the setter position last season, but they now find themselves with two steady leaders.

The two players combined for 133 set assists in the season-opening East Coast road trip – 73 and 60 for Smith and Ma’a, respectively – but their flexibility makes for a pair of dynamic playmakers on the court at all times. Smith, as he has in each of his past two seasons, adds an extra defensive boost in his net play and in his ability to dig opposing attacks. On the offensive side, Ma’a quickly showed his talents as a weapon at outside hitter.

“I think he’s adapting to the next level up. Not only is he taking some time, he’s doing a great job so far,” Speraw said of the freshman after UCLA’s 3-2 victory over Penn State on Friday. “He’ll be pressured in many ways but he’ll learn and grow from it. He’s a great athlete. He’s really good at communicating on the team tactically.”

Despite the successes so far, the Bruins know there is plenty of season remaining. Last year the team also started 3-0 in nonconference play before following the fast start with a disappointing 9-13 record against Mountain Pacific Sports Federation opponents – barely sneaking into the conference tournament.

“We played well at times (last week) but obviously there’s a lot we have to work on still,” said sophomore outside hitter JT Hatch. “Playing against a different opponent really makes us look at what we have to do to get better. Now it’s just, like, ‘Good job, we won, but we need to refocus’ – there’s always the next match in front of us.”

Small improvements on an individual level – always a key tenet of Speraw’s coaching methodology – will be key to the team’s overall trajectory, the Bruin coach said.

“There’s still so much room to improve with how we execute on the variety of systems that we can now play with,” Speraw said. “The conversation has been more about how it’s only been one week, three wins, and we have some tough matches ahead.”

Those improvements are building on a foundation that is far stronger in 2016 than the year prior, Hatch said, bolstering a young group that has committed to getting better in and out of the NCAA season. The 2015 MPSF Freshman of the Year said he’s noticed a new confidence in his own play, with less hesitancy and more maturity.

“A lot of guys put a lot of work in during the offseason, so depth-wise we’re a lot deeper than last year,” Hatch said. “If someone has a bad night, we know there’s someone on the bench who can come in and give us a great game, but it’s a lot more competitive in the practice gym which is making us better.”

The intensity was apparent Wednesday evening at a nearly-three hour practice that Speraw succinctly described as “great.” The new-look Bruins will try to carry that into their conference matches this weekend and quickly set themselves even further apart from last year’s squad.