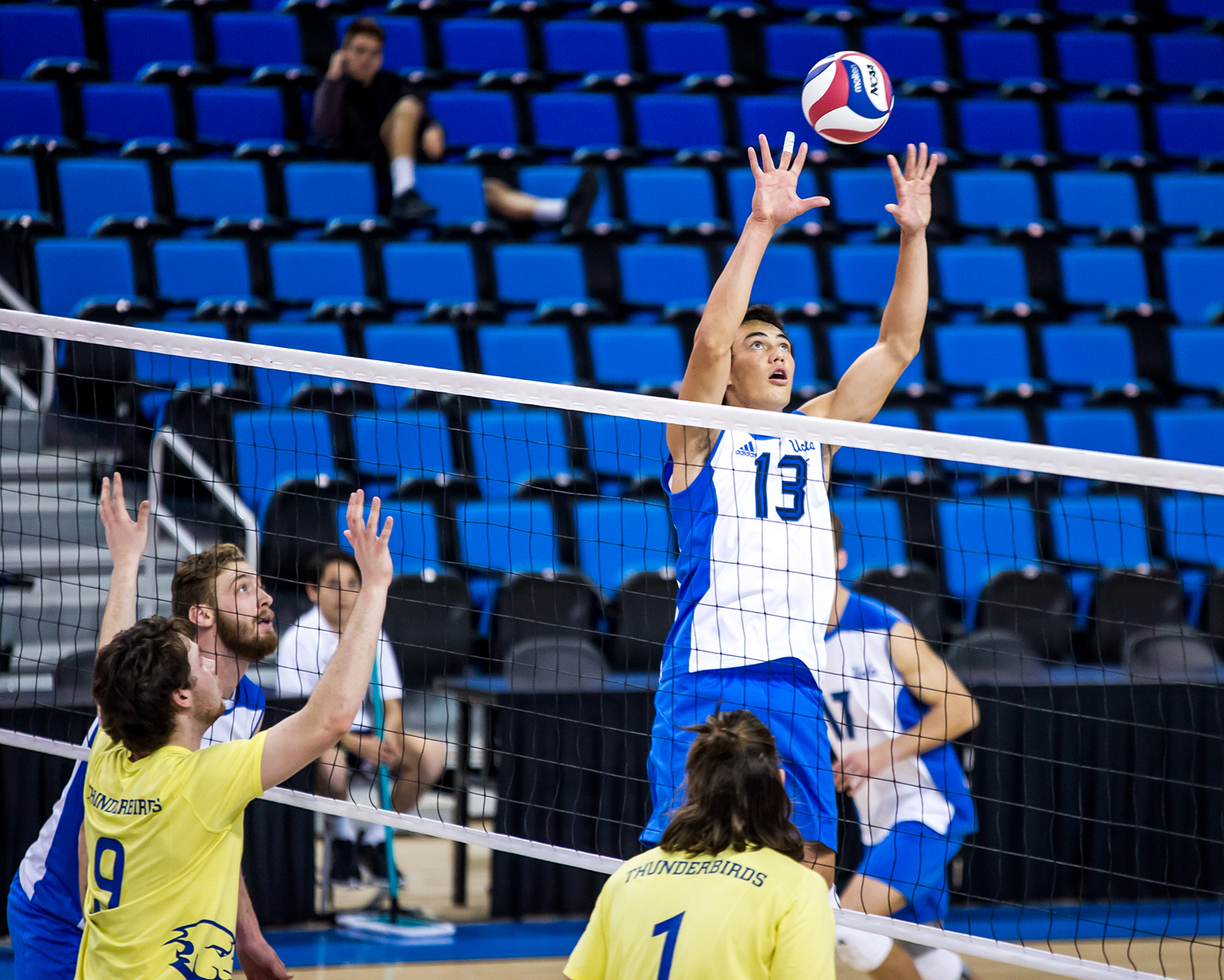 The UCLA men’s volleyball team has lost just three sets in its first four matches – preseason and regular season – of 2016. Two of those lost sets came Friday evening in a grueling five-set victory over Penn State to cap off a wild week of three top-15, East Coast matchups.

The set scores showed a back-and-forth match, but that was not the case Friday. UCLA played well in sets one, three and five – taking all three. In the second set, though, too many service errors proved to be the Bruins’ downfall. The fourth set would also go to the Nittany Lions, as the visitors struggled across the court.

“Penn State was at home, they’re a pretty big team, they feed off their crowd, and I thought they just felt a little bit more comfortable than us at times,” said freshman setter/hitter Micah Ma’a. “It’s their gym and they practice there, so just small little things like that. But as time went on, we became very comfortable and focused on the volleyball rather than the other things and that’s what allowed us to win.”

In the beginning of the fifth set, the score looked to be another close one but, using a 10-2 run, the Bruins clinched the victory.

“We just started to execute,” said sophomore outside hitter Jake Arnitz. “Then we got more positive, and we always play better when we’re positive.”

Despite UCLA’s hitting percentage being far less than the ridiculously inflated numbers of its first 2016 matches, the Bruins still hit .268 as a team. Junior middle blocker Mitch Stahl, Arnitz and Ma’a all had kills in the double digits, while Arnitz led with 13.

This balanced attack can once again be attributed to the passing of junior setter Hagen Smith and Ma’a. Smith posted 24 assists, to go along with five kills, while Ma’a had 26 assists.

On the defensive front, UCLA showed their strength as well. The Bruins had six more total blocks than the Nittany Lions at 16.5 versus 10.5, and they out-dug Penn State 26 to 23.

The home team was able to keep up due to its voracious hitting trio of redshirt sophomore outside hitter Jalen Penrose, junior outside hitter Chris Nugent and redshirt freshman outside hitter Lee Smith. Penrose had a game-high 17 kills while Nugent put up 14 and Lee Smith added 10.

With the victory, UCLA wrapped up a grueling week. The Bruins traveled across the country to play No. 14 George Mason on only two days rest and then two days after that they went up against a powerful No. 6 Ohio State team.

This time, the Bruins had no rest before Friday’s match. After Ohio State on Thursday they played Penn State on Friday. But coach John Speraw still doesn’t think that his team is affected by the travel or short rest.

“They looked pretty sharp and we have depth so we were able to play two outside hitters again,” Speraw said. “I think the guys are in shape and they’re healthy, and we continued to play at a really high level for the second night in a row.”