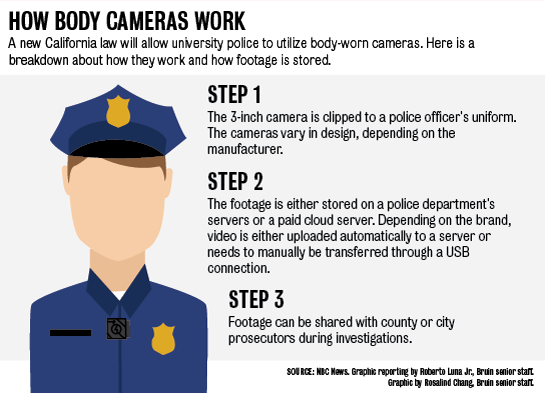 University police officers will begin wearing body cameras by late 2016, in accordance with a new law that went into effect Friday allowing California university police to use them.

The University of California is working with all 10 campus police chiefs to introduce the cameras before the end of the year, said James Herren, UCLA chief of police. The University will start formalizing a system-wide policy and securing funds for the cameras within the next 12 months, Herren said.

State Bill 424 amended an existing law that previously prohibited university police from using recording devices, in an effort to increase police accountability. Footage of police encounters with civilians will be stored for at least two years, according to a state Senate law passed in October. If officers did not make arrests or searches based on the footage, it can be discarded after 60 days.

Richard Pan, a California senator from Sacramento, introduced the bill in August. Pan said he believes university police departments should be held to the same standards as city police, because they function similarly.

Pan said body cameras would help clarify disagreeing accounts between police and civilians by providing objective accounts of their interactions.

In July 2014, the university reached a $500,000 settlement with a black Los Angeles judge who ruled UCPD officers used excessive force after stopping him in Westwood for a seat belt violation.

In an ongoing case, a black UCLA facilities employee claimed UCPD racially profiled him and violated his civil rights during his arrest for a traffic violation in September 2014.

Herren said the University began to advocate equipping UCPD officers with body cameras a few years ago, to increase trust and transparency between students and campus police. He added the cameras will only be turned on while police respond to disturbances or crimes in progress.

Under the new law, footage databases will be stored in a police station or with a reputable vendor, which will permanently retain access logs and track what footage has been deleted.

Chauncee Smith, legislative advocate with the American Civil Liberties Union of Northern California, said he doesn’t think police officers should be allowed to review footage before making initial statements, which state law currently allows, because they could alter their stories to fit the recordings.

“When you’re trying to prepare evidence, it’s important to let each piece of evidence speak for itself,” he said.

“Bystanders (can sometimes) capture what happened,” she said. “I think body cameras would clarify what actually happened (in all instances).”

Herren said UCPD will ask the UC Office of the President for partial or full funding for the cameras.