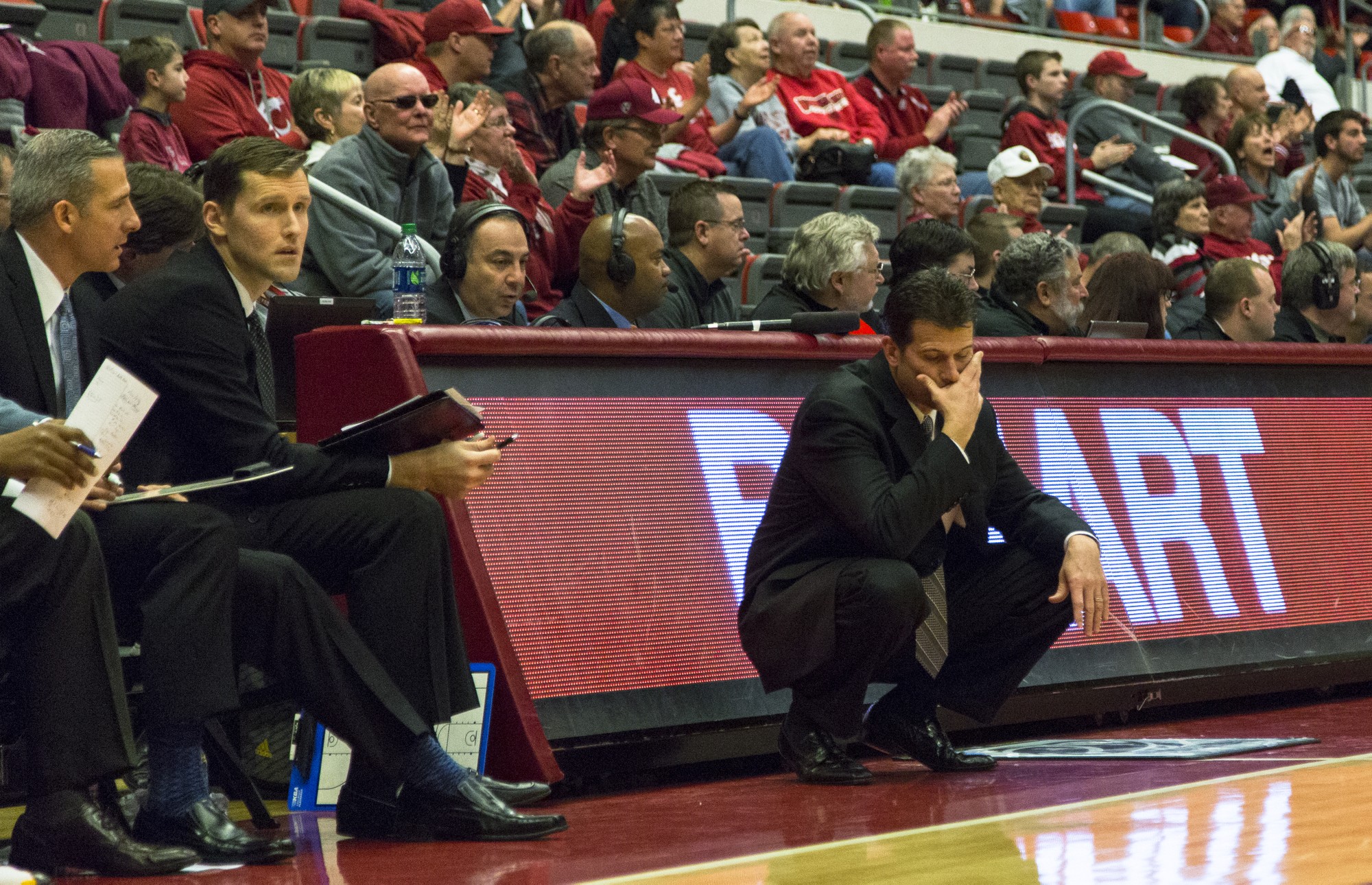 PULLMAN, Wash. — With 43 seconds to go, coach Steve Alford put his right palm completely over his face, as if to shield himself from the jarring reality at hand.

His team was trailing by eight points to lowly Washington State – a team that was picked to finish dead last in the Pac-12. A month before this moment, Alford’s Bruins were relishing an 87-77 win over a team that was then ranked No. 1 in the country: Kentucky.

One month apparently makes a world of a difference in men’s college basketball.

UCLA’s 85-78 loss to Washington State (9-5, 1-1 Pac-12) marked perhaps a new low point in the Steve Alford era. It was the second loss in a two-game Washington road trip, which included two of the Pac-12’s lower-tier teams: Washington (10-4, 2-0) and Washington State. If there was a chance for Alford to finally attain his first Pac-12 road sweep as UCLA’s coach, this was probably the best one – at least this year. But instead of a road sweep, the Bruins got swept.

“This is the most discouraged that we’ve been,” Alford said. “We were showing growth, and we had some slippage this week.”

The loss was a relative low point not just because the Bruins lost on Sunday, but because they lost badly. UCLA led for only 3:19 of the 40 minutes against Washington State, and was outhustled on both ends of the floor. Unlike on Friday night against Washington, it wasn’t turnovers or sloppy offense that cost the Bruins, it was simply a lack of effort.

“Tonight I just didn’t like our effort and passion at all,” Alford said. “(The Cougars) outworked us, and they played with much more passion than what we played (with). And that’s very, very frustrating.”

For the second straight game, senior forward/center Tony Parker looked lethargic and clumsy in the post, fumbling the ball a few times and missing several shot opportunities at the rim. Meanwhile, junior guard Bryce Alford struggled to regain the shooting form that he found late in the Washington game, as he made just two of his 10 field goals.

Junior guard Isaac Hamilton provided a silver lining, scoring 27 points on 12-22 shooting, but even he had some off moments, such as when he let Cougar guard Charles Callison blow right by him for an uncontested layup in the second half.

“We gave up too many buckets, especially in the paint,” said Hamilton, whose team allowed 34 points in the paint. “They just came out and came at us and unfortunately we didn’t respond.”

Playing before a winter break crowd of less than 2,000 people, the Bruins seemed to match the intensity of their surroundings. It was similar to the lower-tier non-conference games at Pauley Pavilion earlier this season, when the stands were half full and the Bruins played down to competition. On the contrary, when the Bruins have played before sold-out crowds – against Kentucky and Gonzaga – they have brought an intensity level that earned them a top-25 ranking.

Alford denied that the quiet atmosphere at Beasley Coliseum on Sunday contributed to UCLA’s lax performance, but Hamilton said that quiet atmospheres do make a difference.

“Most definitely, (the environment) has an effect,” Hamilton said. “But still its basketball at the end of the day you just got to come in and compete regardless of who’s in the stands, who’s out there.”

With UCLA’s enigmatic performances in Washington this weekend, it’s hard to tell what will spur the Bruins back to life. Maybe it will be a bigger crowd, or a bigger game – and both of those will likely come on Thursday, when UCLA hosts No. 8 Arizona.

For now, all that’s clear is that UCLA’s next practice will be intense.

“We have a lot of things to work on for sure,” said sophomore center Thomas Welsh. “There’s no explanation, there’s no excuse for that. This is UCLA, we expect to represent it well.”