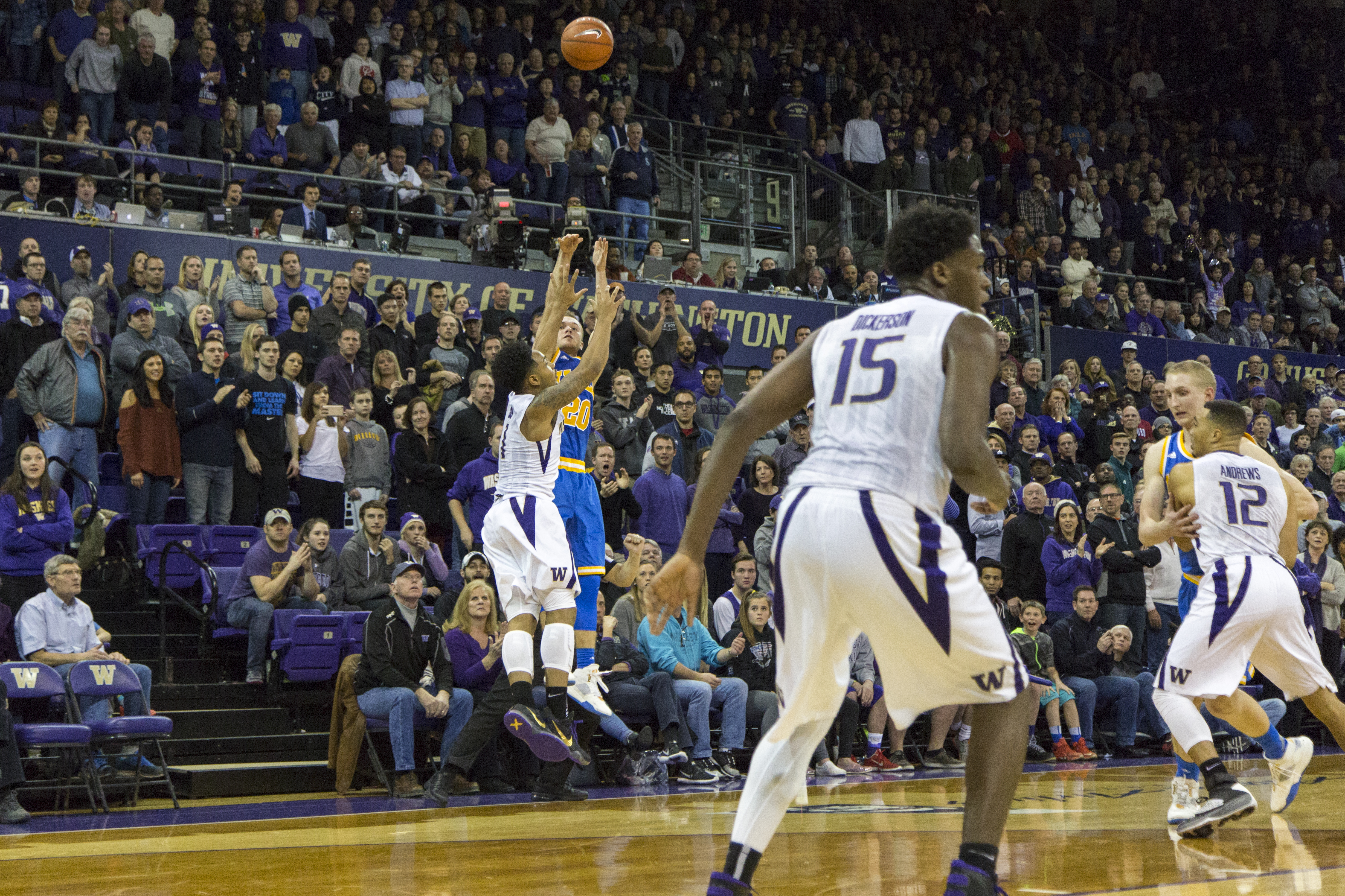 Junior guard Bryce Alford rises up for a game-tying 3-pointer with less than 10 seconds to go in regulation. (Owen Emerson/Daily Bruin senior staff)

SEATTLE — Bryce Alford limped into the UCLA locker room, 48 minutes of game action wearing the soles of his shoes thin.

The junior guard gave it all he had – two 3-pointers in the final 22 seconds of regulation, another game-tying 3-pointer at the end of the first overtime, and 17 made free throws. Alford single handedly scored 19 of his team’s final 28 points, forcing the game into not only a first overtime, but a second overtime as well.

It was one of the most compelling clutch performances in recent UCLA history, but Alford will only remember the game by the end result: a 96-93 loss.

“Any loss is about the same. And we knew we had to come get this one, we just didn’t play well enough to do it,” Alford said. “Already trying to forget about it.”

The first 38 minutes of the game certainly were something worth forgetting about, with both teams looking like they hadn’t picked up a basketball since Christmas. Up until the final five minutes of regulation, there were more turnovers than made field goals.

“Too many turnovers, too many lost opportunities in the first half,” said coach Steve Alford, whose team gave the ball away a season-high 25 times. “I thought we were very settled in and did a good job defensively, but too many turnovers.”

Seemingly everyone on the floor had trouble holding on to the ball, including Bryce Alford. Before his scoring barrage in the final moments of regulation, he was one for 12 from the field, with six turnovers and zero assists.

“Obviously that was one of my worst nights in my career going into the last couple minutes of the game,” Alford said.

Alford wasn’t alone, as Tony Parker had one of his worst games in recent memory as well. The senior forward/center had more turnovers – four – than made field goals – three – and missed several point-blank shots in the paint. Parker struggled to get in a rhythm all night as he and several other Bruins were plagued with foul trouble.

“There were a lot (of fouls), and you got to adjust and be able to handle that,” Steve Alford said. “Obviously we didn’t handle it very well.”

Even with all of the foul trouble, the Bruins still managed to hold a 33-28 lead at halftime, because they significantly outperformed the Huskies at the foul line. That’s where Bryce Alford particularly shined, as he attacked relentlessly and made 17 of his 18 free throw attempts.

But eventually, UCLA just committed too many fouls, forcing inexperienced players into the game, and forcing the defensive strategy to change.

“Because we were in foul trouble we just couldn’t play man (defense), especially in the second half,” Steve Alford said. “We really couldn’t could not afford to go man and get after them the way we thought we could man them, because of foul trouble we had to play a lot more zone.”

With the Bruins in a 2-3 zone for much of the second half, not only did they surrender some 3-pointers, but they also allowed a slew of offensive rebounds. The Huskies had 13 second-chance points in the second half, dominating the Bruins on the offensive glass time and time again. All of a sudden, a game that once saw UCLA leading by as many as 10 points saw Washington leading by seven.

“We just weren’t able to get the stops we needed,” Steve Alford said.

It looked like UCLA was going to fade away as the game wore on, especially after the Huskies hit a huge 3-pointer to go up by four points with 32 seconds left. But Bryce Alford just wouldn’t quit, charging up the floor and making one contested shot after another.

He made one with 22 seconds left, with a hand in his eyes, bringing UCLA’s deficit to one.

He made one with nine seconds left, tying the game and sending it to overtime.

He did the exact same thing at the end of the first overtime, keeping the game alive once more.

Alford did just about everything he could, it just wasn’t quite enough.

As he walked gingerly outside of the locker room after the game, several Washington players went out of their way to pay their respects to Alford, who finished with 30 points. It was one of the best clutch performances in recent memory, one that left many in Alaska Airlines Arena speechless. But all Alford will remember is another lost chance at an elusive Pac-12 road sweep.

“We wanted to come get a sweep – something we didn’t do last year at all, and didn’t do it my freshman year either,” Alford said. “So it’s something we’ve really been harping on is to try and come here and start the season with a sweep. … Already trying to forget about it, (but) obviously it’s going to be tough tonight.”