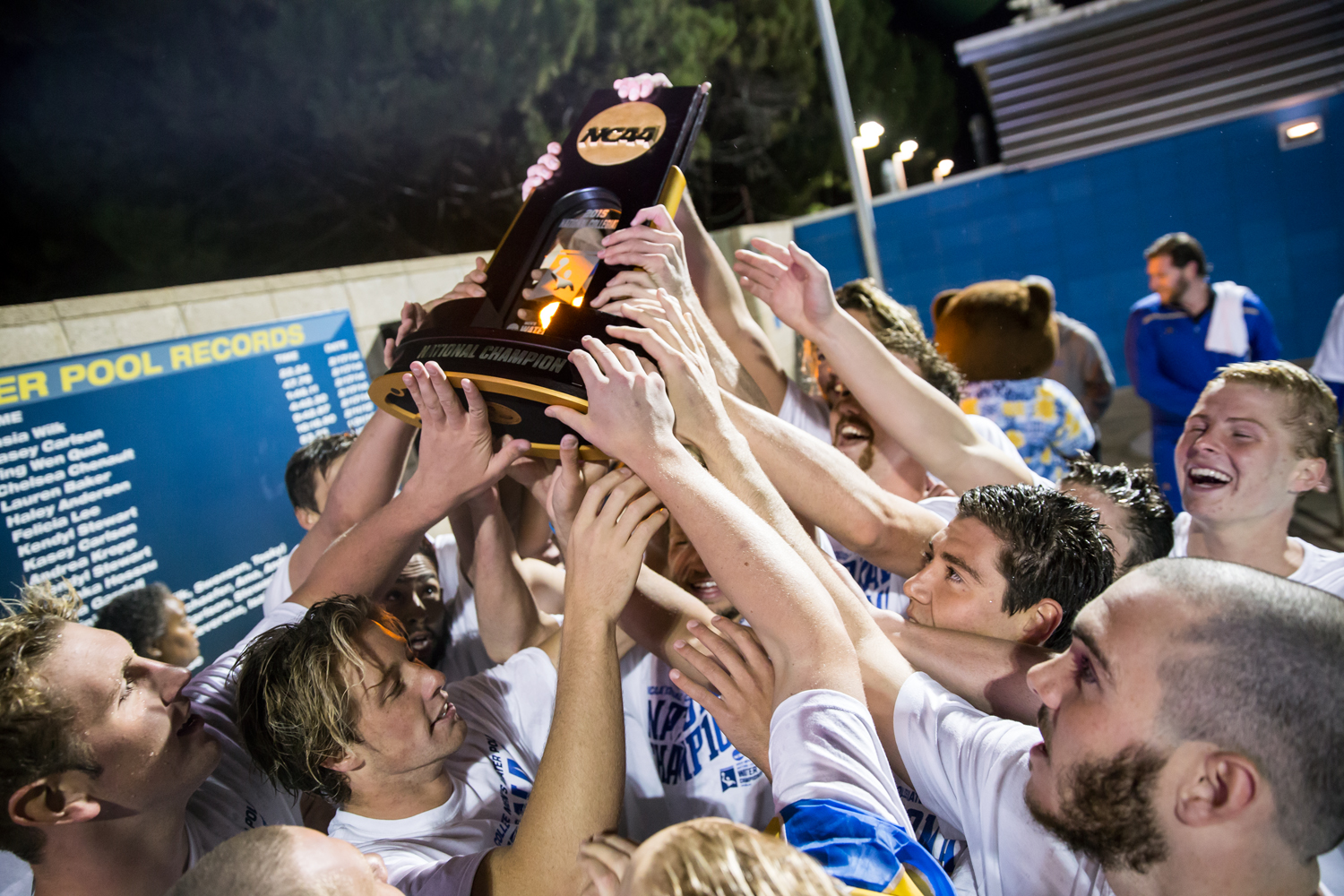 At 6:12 p.m., Dirks Pool was as still as glass and Spieker Aquatics Center appeared as it normally does before a rivalry showdown.

The stands were filled to capacity with a blend of red and blue. TV cameras were situated around the pool, aimed at the two rival teams awaiting the inevitable dive into a heated battle for Los Angeles bragging rights.

In the calm before the storm, one thing broke the familiarity of the scene – a large, blue NCAA logo adhered to the bottom of the pool, directly in the center.

On this night, something bigger was at stake – the match between the crosstown foes was more than a duel for L.A., but a fight for a trophy on a national stage.

At 6:13 p.m., Dirks Pool came alive, the letters of the blue NCAA logo periodically disappearing beneath a torrent of players in transition. At 7:27 p.m., it was completely obscured as coach Adam Wright, the Bruins on the bench and blue and gold fans leapt into the pool, chanting a different set of four letters – UCLA – in complete unison with the crowd.

They did it again. In a dramatic 10-7 contest, the Bruins ousted the Trojans to win their second consecutive national title and top off a 30-win, undefeated season.

“Not many teams have been able to go through and do what these guys have done,” Wright said. “It’s something that they’ll be able to look back at for the rest of their life and know that they left a special mark here at UCLA.”

SEASON RECAP: A perfect end to a perfect season for the Bruins.

As the final minute wound down and a reverberating chant from the fans in blue echoed through the aquatics center, the Bruins notched a crucial stop and ran the clock down. Junior attacker Patrick Fellner iced the match with a buzzer-beater goal.

“I go back to (junior goalie Garrett Danner’s) stop, and that moment thinking, ‘We have time to run out the clock,’ and go back to all those Wednesday night, Thursday night practices where we practiced game situations like this,” said junior attacker Ryder Roberts. “It’s still full game mode until the last buzzer goes off. As soon as the buzzer goes off, that’s the time to relax and celebrate. … It was pretty surreal.”

In the Bruins’ past three matches against the Trojans, they have been outscored in the fourth period each time. For the first time this season, USC’s characteristically volatile fourth period offense lagged as UCLA’s exploded.

Sophomore attacker Max Irving and senior defender Anthony Daboub scored consecutive goals for the Bruins to extend the lead to three heading into the most crucial minutes of the game. Although Trojan driver Blake Edwards narrowed the score with just over three minutes remaining, the Bruins’ defense prevented a comeback.

Unlike the fourth period, the Bruins and Trojans were evenly matched in urgency for a majority of the first 24 minutes.

USC was first to strike with a goal by driver Grant Stein halfway into the first period. The Trojans were also able to draw a 6-on-5 during a counterattack, but the Bruins’ five-man defense tallied two field blocks to prevent the conversion.

Seconds later, with 2:49 remaining in a fast-paced first period, sophomore utility Alex Roelse put the Bruins on the board with a goal from outside.

After an early scoring drought for both teams, USC’s lead climbed to 3-1 after two goals with just under two minutes remaining, but Roberts answered with two goals of his own, including a 6-on-5 conversion, to revive the Bruins and tie the game heading into the second period.

The second quarter initially featured sharp five-man defensive efforts by both teams, as neither the Trojans nor Bruins could convert power-play opportunities. With 5:22 remaining in the half, senior utility Danny McClintick gave the Bruins their first lead of the game.

Contra fouls and field blocks halted momentum on both sides of the pool until junior center Gordon Marshall converted a power play at 2-meters off a pass from Roberts. The crossbar, UCLA’s defense and Danner worked to hold USC scoreless.

The Trojans were able to find the back of the net after nearly 13 minutes of relentless Bruin defense, notching the first goal of the second half to narrow the Bruins’ lead to just one score. Despite bullets from junior attacker Jack Fellner and sophomore defender Chancellor Ramirez, the Trojans’ continuous answers kept the game tight heading into the final eight minutes.

Unlike last year, where the title game came down to the final seconds, the Bruins were in control for the final minutes, thanks to their defense and a critical save by Danner.

“We all knew that if we got one more stop, we could close out that game,” Danner said. “I was confident that the team’s defense would allow me to see low percentage shots. It’s very hard for teams to come through our front court because of the defense this team plays.”

The Bruins have flirted with perfection this season and Sunday evening’s victory over USC was the culmination of a 30-0 run that obliterated UCLA’s single-season wins record and gave the team its first undefeated season since 1969 – making this year’s team just the fourth in college water polo history to go an entire season without suffering a loss.

HISTORY: Read more about the 16 perfect UCLA teams that came before the 2015 men’s water polo squad.

Roberts, the team’s leading scorer this season, was named the tournament MVP after tallying two goals in the finale, yet Roberts said that the honor could have gone to any one of his teammates.

At 7:40 p.m., it no longer represented a Los Angeles showdown. It represented the historic rise of a champion.