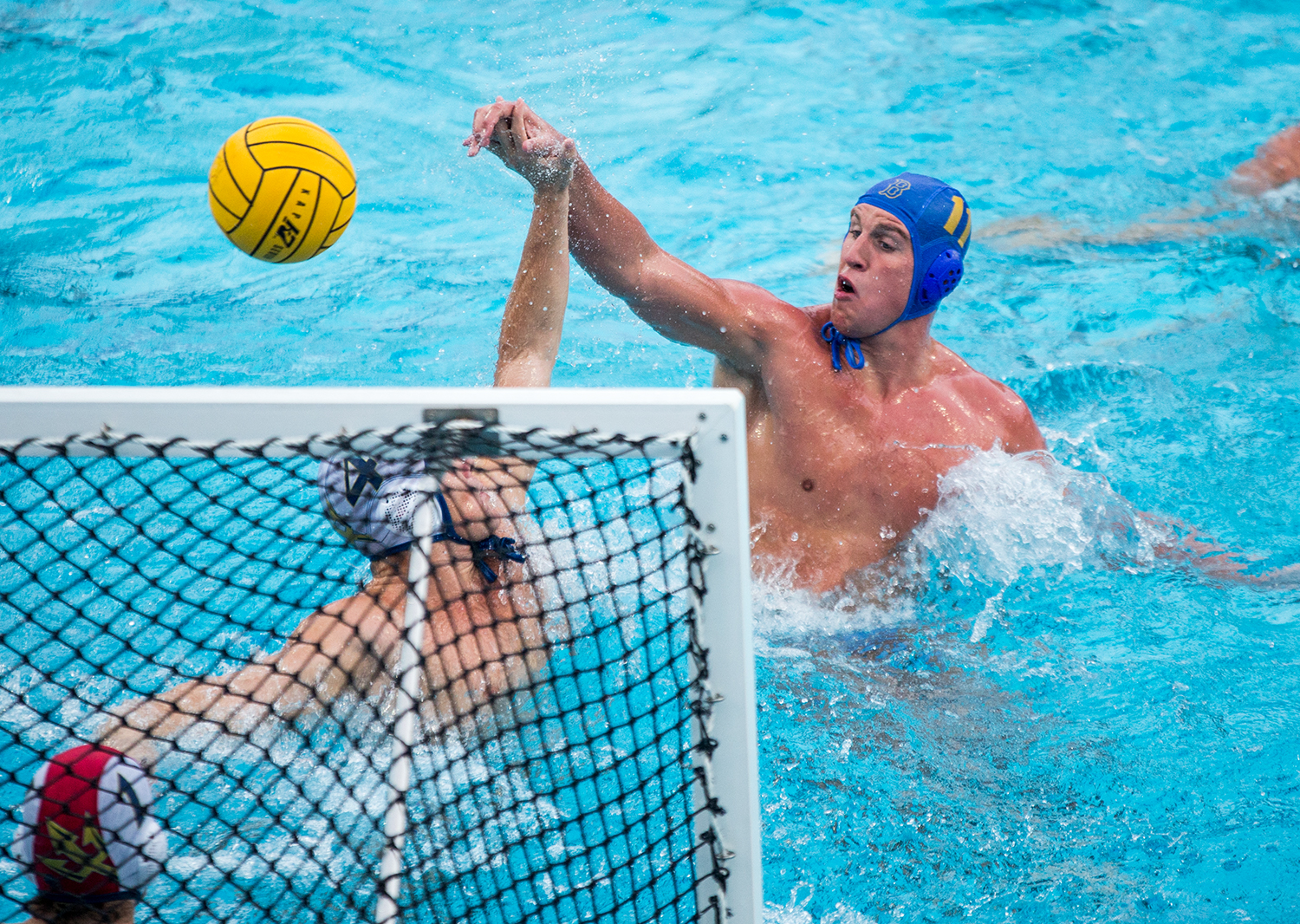 Sophomore utility Alex Roelse and the UCLA men’s water polo team defeated UC San Diego 17-4 to advance to the 2015 NCAA title game. The Bruins are looking to win their second championship in a row against USC on Sunday. (Aubrey Yeo/Daily Bruin senior staff)

In the year since UCLA men’s water polo captured the 2014 NCAA title, the team seemed to have just one focus.

The Bruins traveled across the world to represent the United States at the World University Games, they graduated eight seniors while managing to hold an undefeated record through the entire 2015 regular season and they won the dangerous Mountain Pacific Sports Federation tournament for the first time since 2011.

And yet, with all that behind them, it all comes down to one final game, one final obstacle between the Bruins and their ultimate goal: another national championship.

UCLA’s compelling 17-4 win over UC San Diego on Saturday evening was yet another show of dominance the team has shown all season, and pits the host school against USC in Sunday’s final at Spieker Aquatics Center.

“The work is done,” said coach Adam Wright. “It’s going to come down to who can execute.”

In their first game since the MPSF title game Nov. 22, the Bruins eventually played with that same intensity and fired on all cylinders against the Tritons, but it took a little while.

After UCLA won the opening sprint, junior attackers Jack Fellner and Ryder Roberts scored within the first two minutes for an early 2-0 lead. However, a series of field blocks and batted passes to center stymied the team from doing any more.

The Tritons would get their only goal of the quarter with a minute and a half left when UCSD 2-meter Tyler Mancuso scored on a shot past junior goalie Garrett Danner.

“I think nerves can be a factor in such big home games here in front of family, friends and other people,” said sophomore utility Alex Roelse. “The first quarter in any game is usually pretty tight. … We picked that up quickly in the second quarter, and we were able to push that through all the way to the last minute.”

The Bruins really started to get going as the team’s seniors took charge. Defender Anthony Daboub scored within the opening possession and utility Danny McClintick added two of his own later on.

Exclusions also went the Bruins way. On their first man-up opportunity of the game, sophomore attacker Max Irving’s shot from the wing was field-blocked high into the air perfectly into the hands of Roelse for an alley-oop. Roelse would finish with a team-high four goals.

After a double exclusion of Roberts and San Diego’s driver Cole Martinez, Fellner drew an additional kick out to set up an uncommon 5-on-4 opportunity, after which he put away a low corner from the left wing.

Now, it was the Bruins who batted away passes to whole-set, forced ball-unders and tallied field blocks. If the defense couldn’t manage to prevent a shot on cage, Danner took care of the rest, and exited the game after three quarters with 19 saves.

Just over a minute into the fourth quarter, the Tritons began playing with more offense in mind. They sent two or more players streaking down the pool as the Bruins’ shot clock ran down to less than 10 seconds, and even played defense with only five at times.

UCSD utility and captain Chase Cockerill barred in an upper left corner on freshman goalie Alex Wolf, but Wolf didn’t let in another after and had six saves to close out the Bruins’ 17-4 win.

“Looking forward to next game, and I think everyone on the team is really excited,” Wolf said. “The feelings from last year – we want to relive it.”

And so, with 29 UCLA games down, the freshly forged NCAA trophy will come out and watch the 2015 finale from the sidelines as the two best teams in the country vie to take it home.

Though its permanent resting place has yet to be decided, one thing is for certain: For the Bruins, it wouldn’t have to go far.