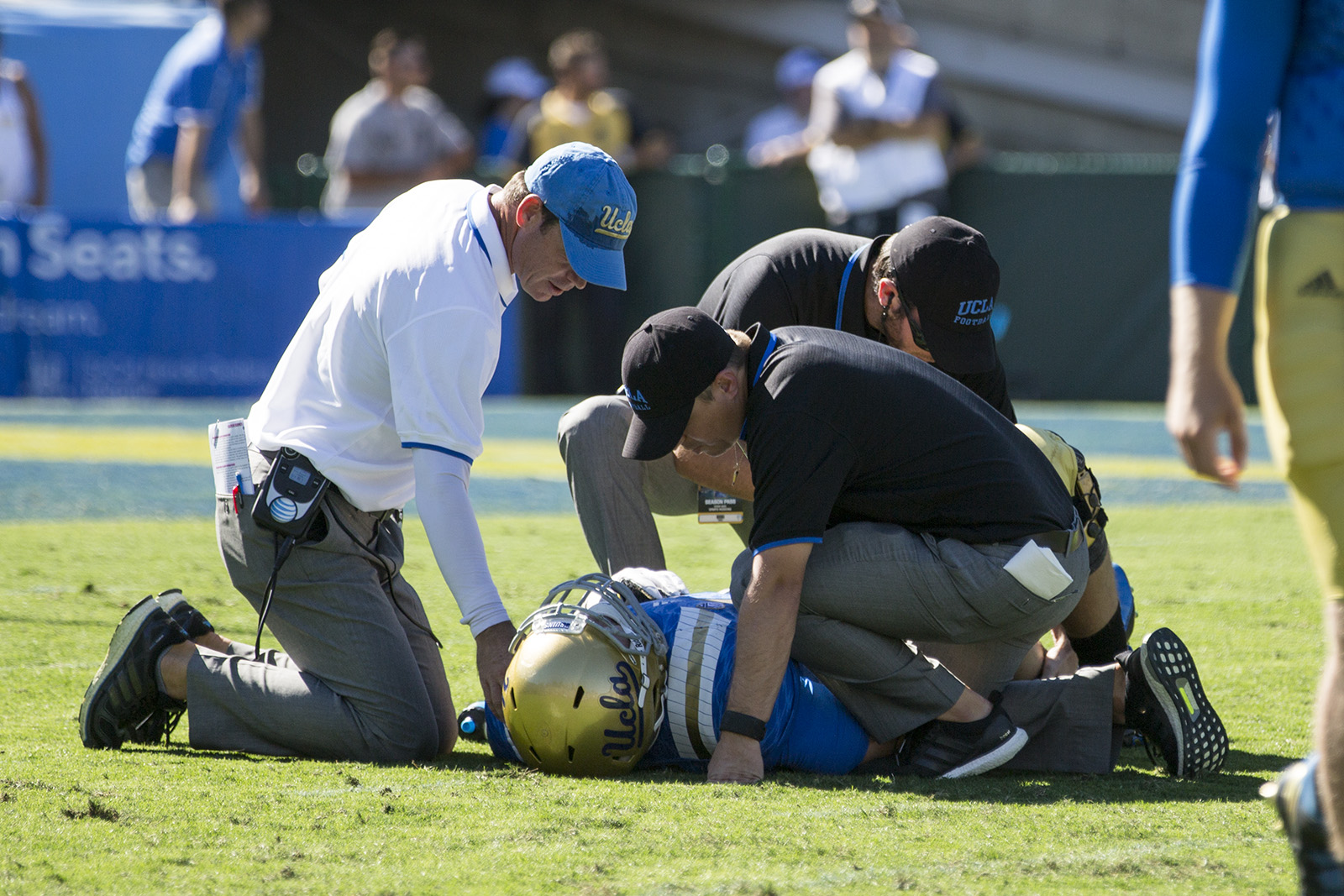 UCLA dealt with several injuries throughout its matchup with Colorado on Saturday. After the already-depleted defense was decimated by further losses, coach Jim Mora and the Bruin coaching staff had to pull the redshirt of freshman linebacker Josh Woods. (Miriam Bribiesca/Daily Bruin senior staff)

All season, UCLA football has practiced a mantra to prepare for the adversity that comes with playing 13 games: “Next man up.”

When junior defensive lineman Eddie Vanderdoes, senior defensive back Fabian Moreau and junior linebacker Myles Jack went out early in the season, it was time for the next man to step up.

Each time a player went down after that, someone else had to fill the role, whether it was one game or more.

On Saturday, the Bruins very nearly ran out of men.

UCLA’s defense took a beating, forced to spend 114 plays on the field against Colorado. The physical toll piled up over the course of the game, as five players suffered injuries that forced additional lineup adjustments.

“(When) you talk about a team and embracing team, that’s what those guys did,” said coach Jim Mora of the players he tapped to step up and finish the game.

Already stretched thin by season-long injury issues – particularly to Vanderdoes, Moreau and Jack, as well as junior linebacker Isaako Savaiinaea, who is out indeterminately after going down against the California Golden Bears last week – the Bruins deployed a number of last-ditch efforts to stay in the game Saturday.

“As a defense we had to dig super deep,” said junior linebacker Jayon Brown.

One of the final options in the depth chart was freshman linebacker Josh Woods, whose redshirt was pulled by the coaching staff after Brown went down in the second half.

Despite being thrown into the fire, as defensive coordinator Tom Bradley described it, Woods registered four tackles before going down with a hamstring injury. The next man up was junior linebacker Cameron Judge – but Judge had never played at the Mike linebacker spot, forcing Brown back into the game at the Mike so Judge could play the Jack.

Brown himself had never played Mike, but said he studied the play calls and was ready to go.

“I don’t practice (it, but) I play the Jack so I have to know every position,” Brown said. “Making the calls wasn’t a big thing, because I echo the call when the Mike does.”

Key players such as sophomore linebacker Kenny Young and junior offensive lineman Caleb Benenoch also both left the game Saturday. The extent of the injuries and timetables for returns are still unknown.

According to Brown, regardless of the outcome, the game plan stays the same.

“Next man up though, you gotta be ready.”