Students work with NASA to launch ELFIN satellite into space 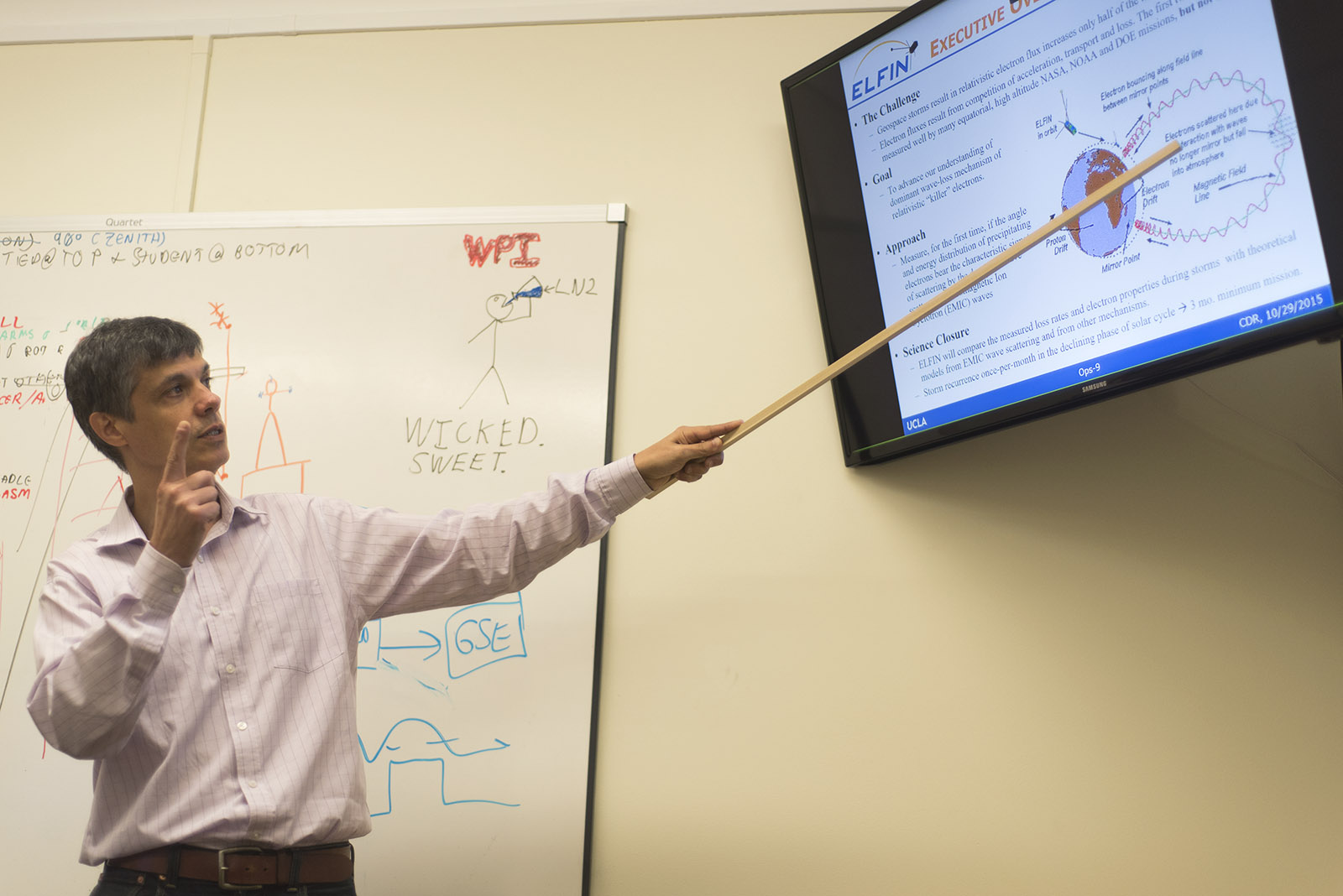 Vassilis Angelopoulos, the principal investigator of the ELFIN satellite and a professor of earth and space sciences, presents an executive summary during an ELFIN meeting. (Owen Emerson/Daily Bruin senior staff)

Student researchers carried wrench sets, solar panels and other satellite parts as they boarded planes to Virginia this summer and early fall, in preparation for launch simulation tests on their satellite.

A UCLA student research group conducted successful experiments that simulated launch forces on the satellite, called the Electron Losses and Fields Investigation, or ELFIN, which intends to predict weather conditions in space. A joint grant between NASA and the National Science Foundation from May 2014 funds the project and guarantees the satellite a launch opportunity.

Lydia Bingley, ELFIN project manager and a geophysics and space physics graduate student, said the vibration tests on the satellite proved that the group had a mechanically stable model that could survive launch forces.

Different ELFIN subsystems, small specialized groups working on different aspects of the project, began presenting their research to NASA and other satellite industry professionals on Thursday. The presentations will determine whether the research team can move onto the next stage of the project, Bingley added.

After the project managers’ designs are approved, ELFIN contributors will develop an engineering model to show that the designs work on the small-scale model. Finally, they will construct the flight model, which will be launched into space.

During simulation tests at the NASA-owned Wallops Flight Facility in Virginia, researchers placed the satellite on shaking tables that applied approximately 22 G-forces to the model, similar to the amount of force felt when on a rocket.

Bingley said while NASA representatives have been present for reviews and updates on the group’s work, the simulations performed in Virginia were the first time the student research team had the opportunity to run a test with NASA officials.

“This is the closest mentorship (with NASA) we’ve had so far,” Bingley said.

She added the simulation was one of the first big accomplishments in the project because it proved the satellite’s base structure was strong, and because it involved assembling many rare components, such as coils.

“(Building the satellite) is a very intricate puzzle,” Bingley said.

ELFIN focuses much of its efforts on developing the relationship between NASA workers and the students working on the project through feedback from NASA representatives and other satellite industry leaders such as the Aerospace Corp., Bingley said. She added NASA representatives give advice on designs and aid students in data analysis.

The lead managers of the 10 separate subsystems working on the project will present their work thus far at critical design reviews, which began Thursday and will continue for about six weeks.

Subramanian, whose group will present to the review board in about two weeks, said the main process of the reviews will be to get insight from leaders in the satellite industry, including critiques and suggestions on the design.

Nick Adair, lead electrical engineer of ELFIN and a fourth-year electrical engineering student, said his group constructed computer components, such as the printed circuit boards that control and help run the ELFIN satellite. They also built the antenna and the model solar panel boards that were used in the vibration test in Virginia.

“Making sure that all of these bits and pieces come together at the same time is … the most difficult part,” Adair said.

If the designs and small-scale model are approved, the ELFIN will launch in late 2016 or early 2017, Bingley said.