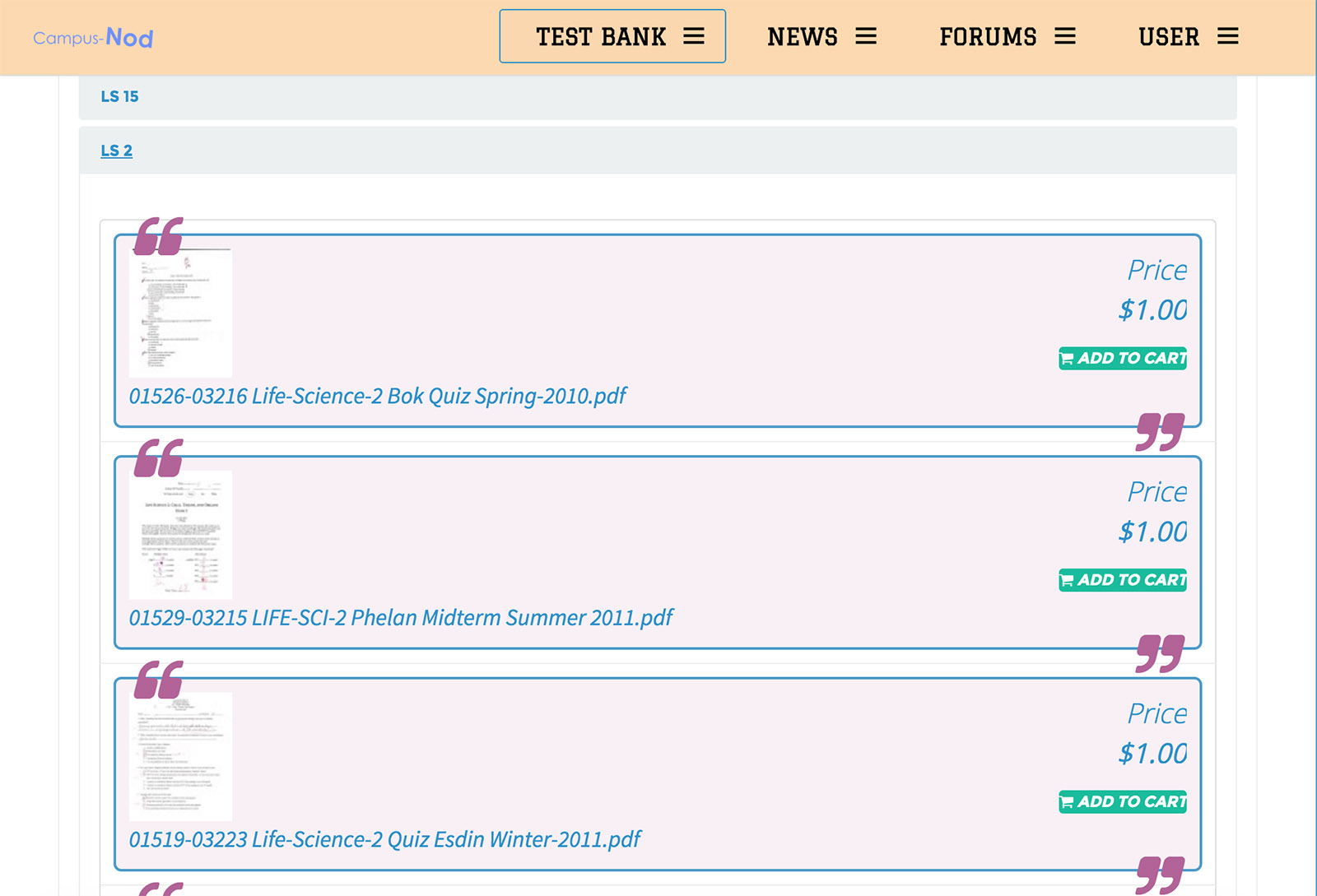 The CampusNod test bank offers about 10,000 exams in 77 subject areas, said Joel Yancey, a UCLA alumnus and co-founder of CampusNod. He added that 15 percent of the organization’s profits will fund research at the Alzheimer’s Association.

Yancey said CampusNod staffers reached out to fellow UCLA alumni to gather most of the old tests. He added his team is trying to obtain more recent tests by offering students one free exam download for every five they upload.

The alumni launched a preliminary version of CampusNod in July, in response to a 2010 undergraduate student government council member’s suggestion to create an online bank that could replace the Community Programs Office’s test bank, Yancey said.

The CPO manages a test bank in the Student Activities Center that provides students with copies of old exams. Every time students visit the test bank, they have five minutes to select five tests, which cost 10 cents per page.

“The test bank on campus is only open during business hours,” Yancey said. “Where do you go when you realize you aren’t prepared the night before a test?”

The CampusNod team launched the website for the first time in July as a subscription-based program, but decided to take it down and make changes later that month before relaunching what they call CampusNod 2.0 in October, Yancey said. He added the changes made gave the website a cleaner layout and better organization.

Andy Zhu, a first-year business economics student, said he thinks the website makes studying easier for students and saves them time because they do not have to physically go to the CPO test bank.

Several professors said they were concerned CampusNod is selling their intellectual property on the site.

“I don’t like the idea of this website – it’s my material that they are selling, and it’s copyrighted,” said Robert Gould, professor and undergraduate vice chair at the department of statistics. “But what makes me more upset is that I’ve worked hard to create an environment where all students already have all the material they need to succeed.”

Anthropology professor Joseph Manson said selling old papers is academically dishonest because it would give students who are aware of the website an unfair advantage. He added his study guides are good indicators of what the test will contain.

Patricia Jasper, campus counsel from the UCLA Office of Legal Affairs, declined to comment on the legality of CampusNod’s services.

In response to professors’ concerns, the CampusNod team said in an email statement UCLA set a precedent of allowing test banks to exist. The CampusNod staff added there are other websites online, such as CourseHero, that sell access to exams.

The team added professors who accuse CampusNod of copyright violations should also be aware of fraternities or sororities that charge membership fees that allows access to in-house test banks. It also said it believes students become the rightful owners of exams that are handed back to them.

The statement said professors who would like to lodge complaints should email CampusNod representatives at [email protected].