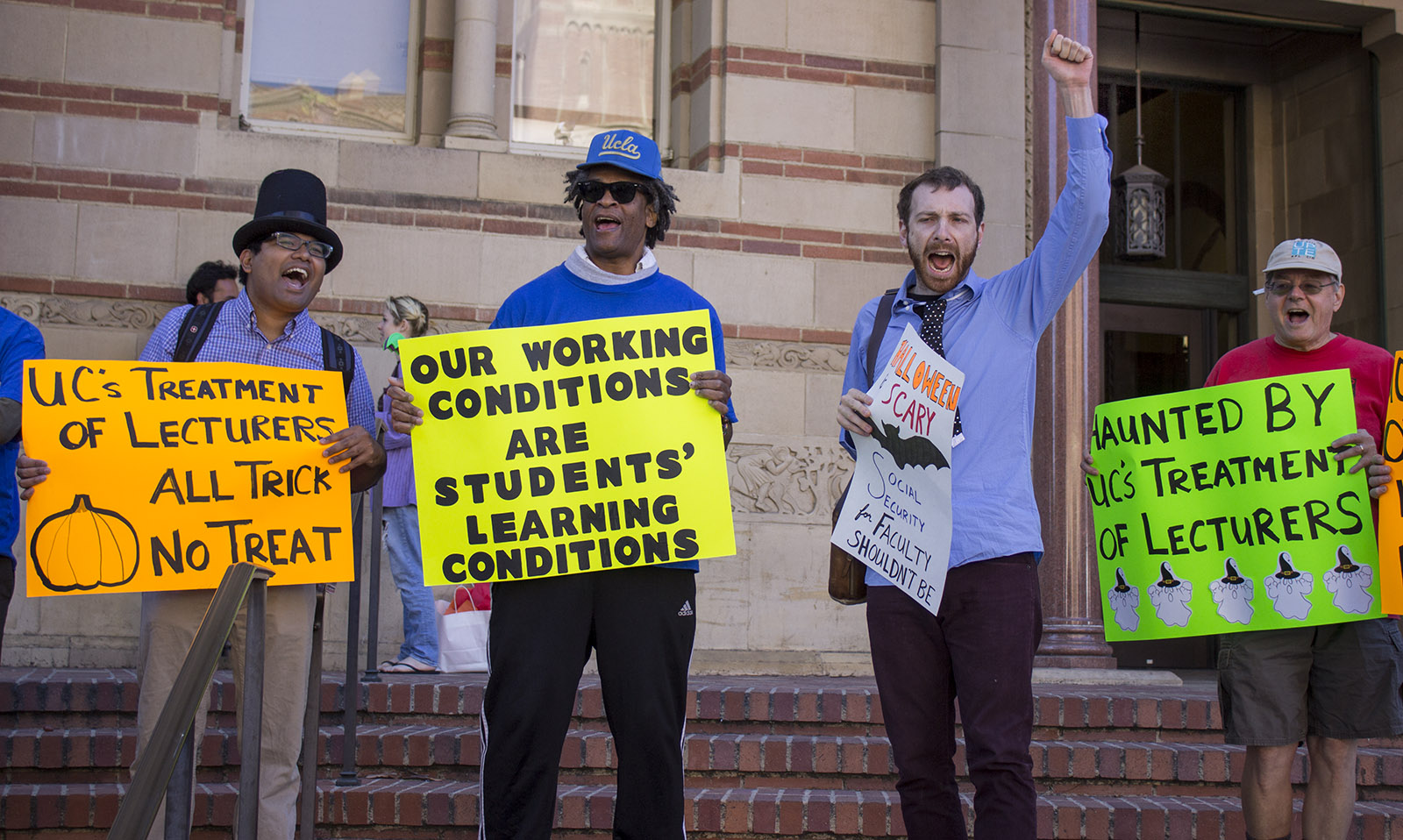 Lecturer union members and other supporters gathered on the steps of Powell Library on Thursday to inform students about contract negotiations between the union and the University of California. (Alyssa Dorn/Daily Bruin)

Lecturer union members and other supporters gathered on the steps of Powell Library on Thursday to inform students about the contract negotiations between the union and the University of California.

The University Council-American Federation of Teachers, which represents non-Academic Senate faculty in the UC system including lecturers and librarians, began negotiating a new contract with the UC in the first week of March.

Negotiations were scheduled to take place Tuesday to Thursday, but the UC-AFT said on its Facebook page UC lawyers did not meet with them until 6:30 p.m. on Tuesday. Negotiations for the new contract are ongoing, and the previous contract will expire Saturday.

UC spokesperson Kate Moser said the University hopes to reach an agreement soon and declined to comment further when asked to answer specific questions over the phone.

About 1,200 lecturers taught at UCLA in the 2014-2015 academic year, said Mia McIver, president of the UCLA chapter of the union. The union has about 50 percent membership at the end of academic quarters, but the number drops to 35 percent at the beginning of the next quarter because lecturers don’t return, she added.

About 25 union members and supporters wore AFT T-shirts and others sported Halloween costumes, including hats, masks and boas. Some held signs that said “Halloween is scary, being a lecturer shouldn’t be.”

“You have part-time lecturers who love the work they do, but have to work two or three jobs to make ends meet,” McIver said.

Chris Gray, organizing vice president of UC-AFT, said the union wants more protection for lecturers who have not yet taught for six years and must reapply for their jobs either every quarter or year.

Gray added the union asks that lecturers are reviewed after every three years instead of six years, to benefit students as well as lecturers.

“With earlier excellence reviews, bad teachers will be weeded out sooner and teaching will get better in the UC system,” Gray said.

He added that lecturers who have not taught for six years do not have health care or retirement benefits.

McIver said the lack of benefits disproportionately affects female faculty. According to a UC data report, women make up 30 percent of the tenure-track faculty, but make up 50 percent of lecturers.

Goetz Wolff, former president of UC AFT Local 1990 and protester at the rally, said the goal of the protest was to tell students the quality of their education is reliant on the treatment of their faculty, because faculty can devote more time to students if they do not have to worry about job security.

“Lecturers are treated as second-class citizens in universities,” said Wolff, a lecturer in the Department of Urban Planning.

McIver added the temporary status of lecturers was justified when they were used to fill in for tenured faculty on leave. Now, many lecturers teach almost every quarter and are still treated as temporary employees, she added.

There are about 3,500 lecturers teaching across the UC system, said Bill Quirk, associate director of UC-AFT. He said since the lecturers work on quarterly contracts, the union loses about 70 percent of the lecturers it represents every two years.

Quirk said he thinks the turnover rates are unnecessarily high because departments want to maximize the flexibility and minimize the costs of teaching faculty.

Many lecturers don’t hear from their department chairs and are not observed teaching in class, McIver said.

She added the union also wants to give lecturers more influence over campus educational policies, which are solely controlled by the Academic Senate. Lecturers are not represented by the senate, but some lecturers in the UC-AFT have expressed interest in pursuing representation in the senate, McIver said.

Lecturers at some UC campuses can influence educational policy by sitting on committees, but they are not paid for their participation, Gray said.

McIver said she thinks that negotiating a new contract with more stability, better benefits and more governance for lecturers will improve student education.