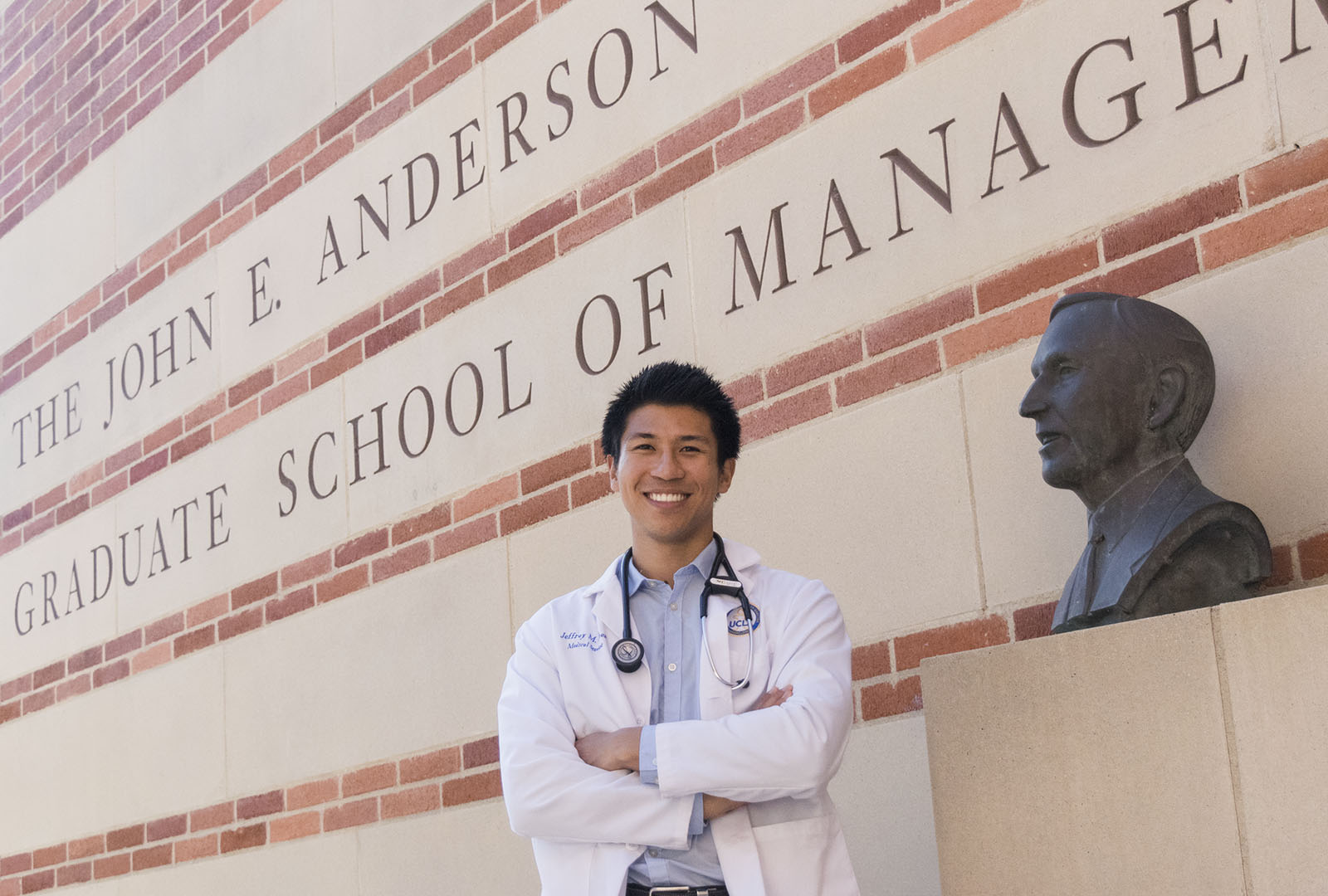 Jeffrey Chen took a leave of absence from his dual studies in management and medicine to create a nonprofit organization, the National Institute of Cannabinoid Research.
(Alejandra Reyes-Velarde/Daily Bruin senior staff)

In June, Jeffrey Chen met a mother whose child has a rare form of epilepsy. He was shocked to hear her child’s symptoms nearly disappeared after he began to use medical marijuana.

“Her kid had a host of side effects from past prescription drugs – he would sleep all day and have zero energy,” Chen said. “When he started using cannabinoids, the seizures decreased and he returned to running around and playing. (The difference was) like night and day.”

Chen said he has since searched several medical marijuana dispensers across Los Angeles and talked with several people, whose stories inspired him to increase the amount of data and knowledge available to the public about marijuana research.

After attending medical school at UCLA for three years, Chen received a full scholarship to attend the Anderson School of Management. In September, Chen decided to take a leave of absence from his dual studies to found a nonprofit organization, the National Institute of Cannabinoid Research.

On Thursday, Chen will speak to students in Bruin Medical Entrepreneurs about his experiences starting a nonprofit organization and blending business with medicine, as part of the club’s speaker series.

Chen said the National Institute of Cannabinoid Research, or NICR, is in preliminary stages. He and his partners are gathering initial surveys from marijuana users and searching for funding sources. Chen added the organization would be the first independent research institution to publicly share information about medical marijuana health benefits and harms with researchers and patients.

NICR researchers plan to use mobile application data to assess medical marijuana patients’ sleep patterns. They will then compare the amount of sleep patients get with their prescribed dosages, with patients’ permission, to determine the effectiveness of marijuana as a treatment. Chen said he thinks other researchers conduct surveys that are subject to response bias and use unreliable metrics, such as measuring how much patients smoke.

Chen said he was inspired last year by Sanjay Gupta’s CNN documentary, “Weed,” that discussed the health benefits of marijuana. He was surprised he wasn’t aware of the positive effects of the drug, even though he had studied medicine in a liberal state.

“(The film covered information) doctors don’t even talk about,” he said. “(I learned) medical marijuana can help with seizures, Alzheimer’s, depression and even psychosis, among other health problems.”

Chen said it is nearly impossible to research the medical impacts of marijuana in the U.S. because it is not a federally accepted medical treatment. Similar drugs, known as schedule-one drugs, include heroin and LSD.

Matt Monte, Chen’s business parter and physician, said he is impressed by Chen’s ability to incorporate his sense of adventure into his passion for research and entrepreneurship.

Monte and Chen recently held a NICR board meeting in Venice Beach so board members could discuss new business ideas in between surf sessions. Monte said the change in setting inspired them to think differently about business ideas, such as creating standardized medical marijuana products and pressed juices and oils that can be used as alternatives to smoking.

“We bounced questions off each other, brainstormed and got really excited about everything we had been planning for the research institute,” Monte said.

Monte said surfing and spending time with Chen inspired him to think about starting his own clinic that would be tailored to teaching and treating patients.

“That was the first time I shared the idea with anyone,” he said. “Once Jeff sees a spark in you, he really wants to turn it into a wildfire.”

Chen said he finds the entrepreneurship aspect of medicine exciting because he can start from a blank slate, unlike doctors, who often work within the confines of what is already established.

“You can take it wherever you want,” Chen said. “Your work is only limited by your imagination.”

Brandon Barney, a science and health radio producer and friend of Chen’s, said he is surprised by how many different interests Chen balances.

“He’s incredibly extroverted and not afraid to talk to anyone,” he said. “He’s really skilled at creating an environment where people feel comfortable.”

Chen said he sings and plays guitar on campus, and hopes he can perform for patients at the Ronald Reagan UCLA Medical Center. This year, Chen and Barney went to the Lighting in a Bottle music festival, where Barney said he was truly able to see the different facets of Chen’s personality.

“It was amazing to be there with someone who is usually very serious but is able to put that down and enjoy life living in the moment,” Barney said.

Chen said he decided to become a doctor three years ago, and finds the path to be fulfilling but linear. Earlier this summer, he realized he could strive to improve the health system through entrepreneurship.

“The first terrifying decision I made was taking my leave of absence,” Chen said. “I don’t know how long I’ll be a doctor or entrepreneur … but I saw a way to impact millions of people.”