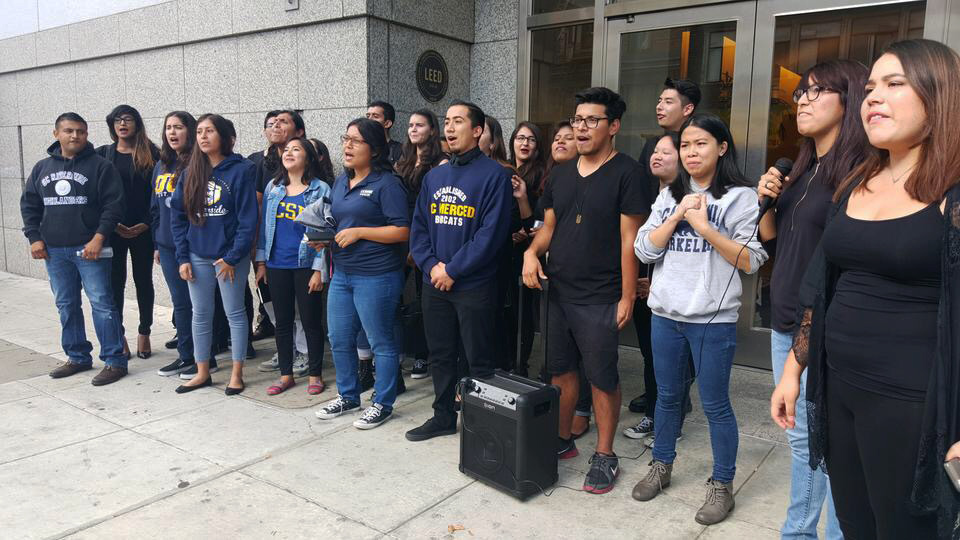 About 30 undocumented responded to the University’s lack of support for undocumented in front of the UC Office of the President in Oakland on Monday. (Courtesy of Fernando Antunez)

Undocumented students from different University of California campuses assembled Monday outside the UC Office of the President in Oakland to express their frustration about what they called a failure to address issues that affect undocumented students.

About 30 students from nine different UC campuses gathered to issue a joint statement in response to the University’s lack of support and communication regarding undocumented student issues, said Magdaleno Rosales, a third-year anthropology student who attended the protest.

“We wanted to put forward a statement saying we will no longer let the UC be unresponsive to undocumented students,” Rosales said.

The UCOP’s decision to halt efforts to increase student representation on the President’s Advisory Council on Undocumented Students prompted students to organize the protest, said Vlad Stoicescu-Ghica, a fifth-year political science student, an event organizer and co-chair of Improving Dreams, Equality, Access and Success, or IDEAS, at UCLA.

Stoicescu-Ghica said the University agreed earlier this year to increase student representation on the board after students walked out of UC President Janet Napolitano’s speech at the first-ever UC summit on undocumented students in May.

“The council had only two student representatives in a council of 18 people,” Stoicescu-Ghica said. “Our goal was to increase participation of undocumented students in helping make decisions that affect their academic life and opportunities.”

Students walked out of the summit to express disappointment with the UC for not being transparent about the criteria they used in selecting students they invited to the conference, as well as to protest Napolitano’s former role as secretary of the Department of Homeland Security.

UC spokeswoman Rebecca Trounson said in an email statement Napolitano launched a systemwide initiative to enhance undocumented student services and financial aid available to those students by providing one-time funding of $5 million. The initiative focused on expanding campus services such as academic advising and off-campus resources, she added.

Ghica said all efforts to increase student representation on the board halted when the UC officials announced in an email statement this month they would pause all activity in order to focus efforts on extending legal services to undocumented students and studying the impact of the $5 million funding initiative.

“It’s been a constant cycle of lack of support and communication,” Stoicescu-Ghica said. “We worked all summer to establish a framework for increasing communication on the advisory council and it was halted out of the blue.”

Stoicescu-Ghica said UC students from all nine undergraduate campuses will collaborate to address issues like financial aid availability, regardless of whether or not the UCOP issues a response.

Representatives from each campus will also work together to organize a student summit to address undocumented students issues, Stoicescu-Ghica added.