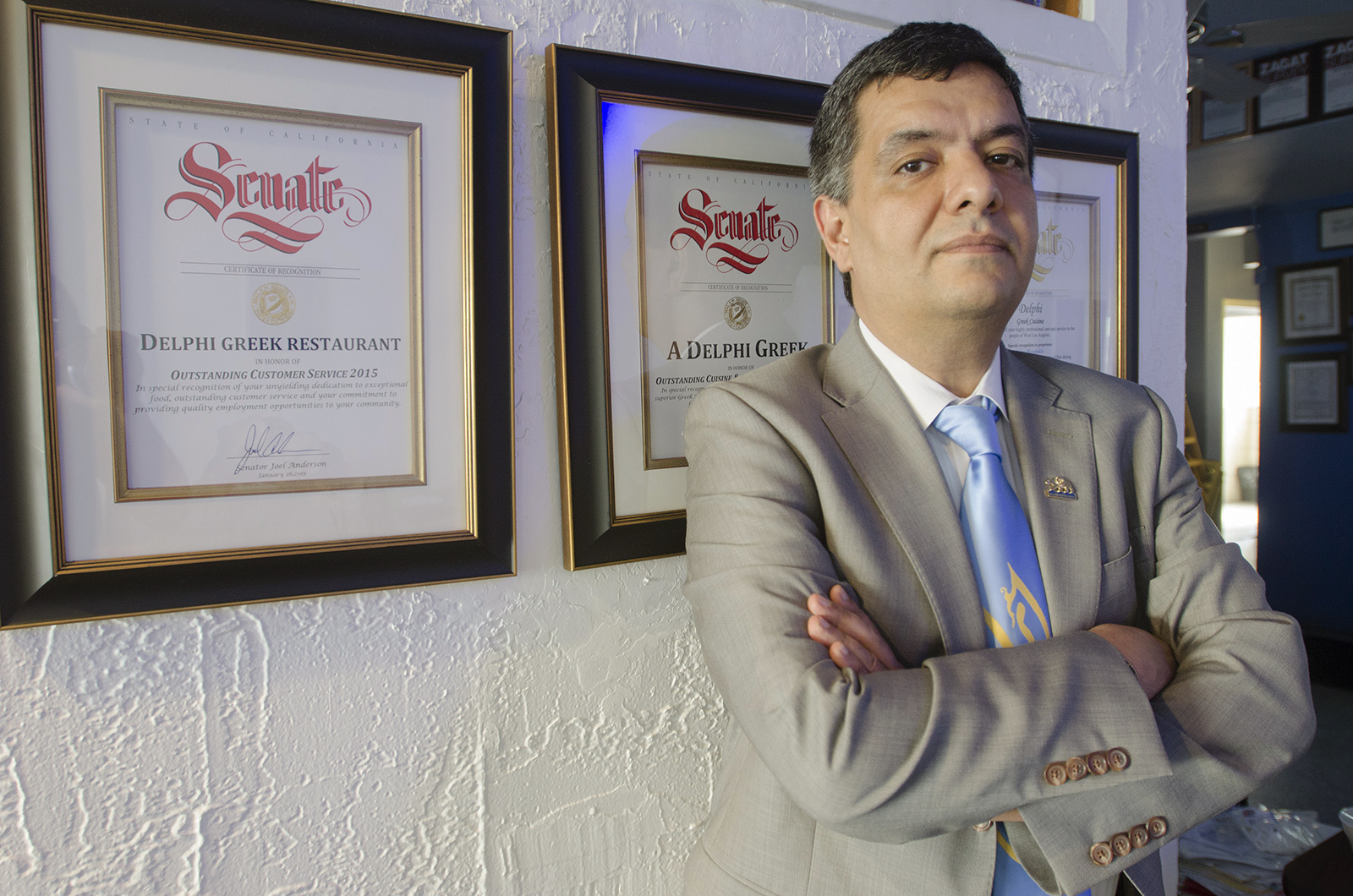 Roozbeh Farahanipour is the president of Delphi Greek, the only Hellenic, or Greek, restaurant in Westwood. Delphi Greek celebrated its 30th anniversary Sunday. (Julie Song/Daily Bruin)

Charles Winkler said Delphi Greek’s current employees were as friendly at the restaurant’s 30th anniversary ceremony Sunday as the original owners were when he visited on its opening day in 1985.

“I worked down the street on Rochester (Avenue), and I was looking for a place to eat lunch,” Winkler said. “When I walked into the restaurant, they told me I was their first customer.”

About 50 Westwood residents, customers and government officials attended a ribbon-cutting ceremony Sunday that marked the 30th anniversary of Delphi Greek, the only Hellenic, or Greek, restaurant in Westwood. Winkler and his wife, Ann Trinz, were invited because they were some of Delphi Greek’s first customers.

Winkler said the ambiance, with blue-and-white walls and unique menus, motivated him and his wife to regularly visit Delphi Greek, located on Westwood Boulevard near Wilkins Avenue south of Wilshire Boulevard. Trinz said she feels she is in Greece whenever she eats at the restaurant.

Delphi Greek has won three awards from the state Senate, two from the city of Los Angeles and many from Zagat. The plaques are lined up on the walls above the register and near the tables.

Officials such as Gregory Karahalios, consul general of Greece in Los Angeles, and California Assemblyman Sebastian Ridley-Thomas walked down a blue carpet inside the restaurant Sunday afternoon before greeting attendees and speaking fondly of Delphi Greek.

He added he thinks most Hellenic restaurants in Los Angeles try to elaborate on their cuisine and make it closer to the taste of the local public, but Delphi Greek maintains a more traditional style.

“Even though we are in a city that always expands and changes, we need something that is stable,” Karahalios said. “This restaurant has maintained the color of Greece.”

Eugene Tseng, a UCLA alumnus and member of state Senator Ben Allen’s office, said he always ordered lamb chops when he frequented the restaurant as a UCLA student. Tseng added he thinks Farahanipour’s friendly personality and service have kept the restaurant open for so long.

“Roozbeh always talks to me when I eat here, which makes the experience more pleasant,” Tseng said. “You can feel the Greek vibe when you eat here.”