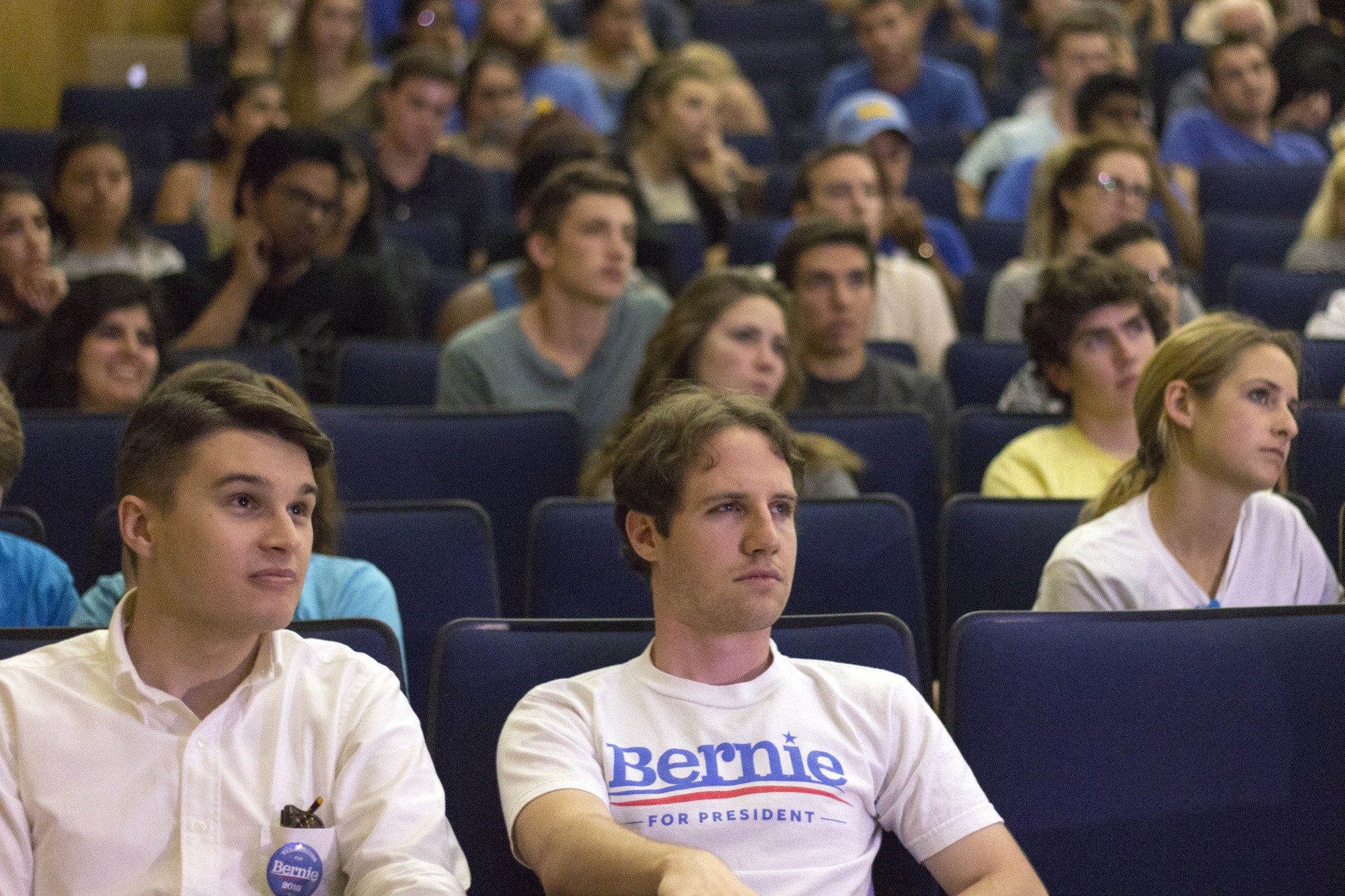 Members of Bruins for Bernie and Bruin Democrats almost filled a 350-person lecture hall as they watched a live-stream of the Democratic debate in Young Hall on Tuesday. Most were interested in Sen. Bernie Sanders’ (I-Vt.) stance on free public university tuition. (Helen Kwak/Daily Bruin)

Stomping and whistling drowned out parts of the live-stream of the event held in Young Hall. Students cheered for a majority of Sen. Bernie Sanders’ (I-Vt.) political platforms, but were most enthusiastic about his stance on free public university tuition.

Bruins for Bernie, a UCLA student group that aims to campaign for Sanders, is in the process of becoming a school-sanctioned student organization after its inception this summer.

Sanders received political attention earlier this year for his progressive stances on increasing minimum wage, combating climate change and limiting big business, even before he announced his candidacy in May.

He said the club does not operate under an official executive board or offer leadership positions to members so everyone who wants to participate can be equally involved.

“We want to be reflective of Sanders’ campaign philosophies,” Casey said.

Brian Carolus, another Bruins for Bernie organizer and UCLA Extension student in the Paralegal Training Program, said he connected with Casey and other organizers at a rally in Los Angeles on July 29.

The club began with about five members, but has since grown to include over 500 members in its Facebook group and about 50 attendees at meetings, Carolus said.

Taylor Womack, a first-year bioengineering student, attended the debate viewing and said he plans on becoming a member of Bruins for Bernie.

Womack said he wants to do what he can to support Sanders because he respects that Sanders uses problems with money in politics to address larger political issues, such as a lack of universal health care and the increase in privatized prisons.

Amy Linehan, president of Bruin Democrats and third-year mathematics and economics student, said she decided to collaborate with Bruins for Bernie to utilize both clubs’ bases and co-host the event.

Linehan said most club members and directors support Sanders, though Bruin Democrats has not officially endorsed a candidate. She added she thinks Sanders is an interesting candidate because he appeals to both Democrats and Republicans.

“I think (Sanders) resonates a lot with what the youth are passionate about, especially when he talks about free college,” Linehan said. “The way he speaks and his passion ignites something that I think Obama ignited in young people.”

Linehan said she hopes to collaborate more in the future with Bruins for Bernie, especially if Bruin Democrats endorses Sanders, because both clubs have similar goals, such as increasing voter turnout among students.

Casey said he thinks the reason Bruins for Bernie is getting so much attention as a grassroots club is because people are fascinated with the idea that unpaid college students are choosing to be politically active.

John Zaller, a UCLA political science professor who conducts research on American politics, said in an email he thinks millennials, regardless of their party affiliations, support Sanders because youth are often attracted to progressive stances.

He said he thinks one reason millennials are often a targeted demographic in campaigning is because they usually live in concentrated areas, such as college campuses, and therefore are easy to mobilize.

Carolus said he hopes to create different subgroups in Bruins for Bernie that advocate for different special interest groups, such as “Low-income students for Bernie,” “Women for Bernie” or “African Americans for Bernie.”

Bruins for Bernie is also facilitating voter registration and will be organizing a group fliering session Saturday at the Third Street Promenade, in collaboration with the group Los Angeles for Bernie.

Casey said he does not envision Bruins for Bernie continuing as a UCLA student organization after the campaigns are over, but may alter the club’s goals and name if Sanders is elected.