UCLA falls to Stanford on the road 56-35 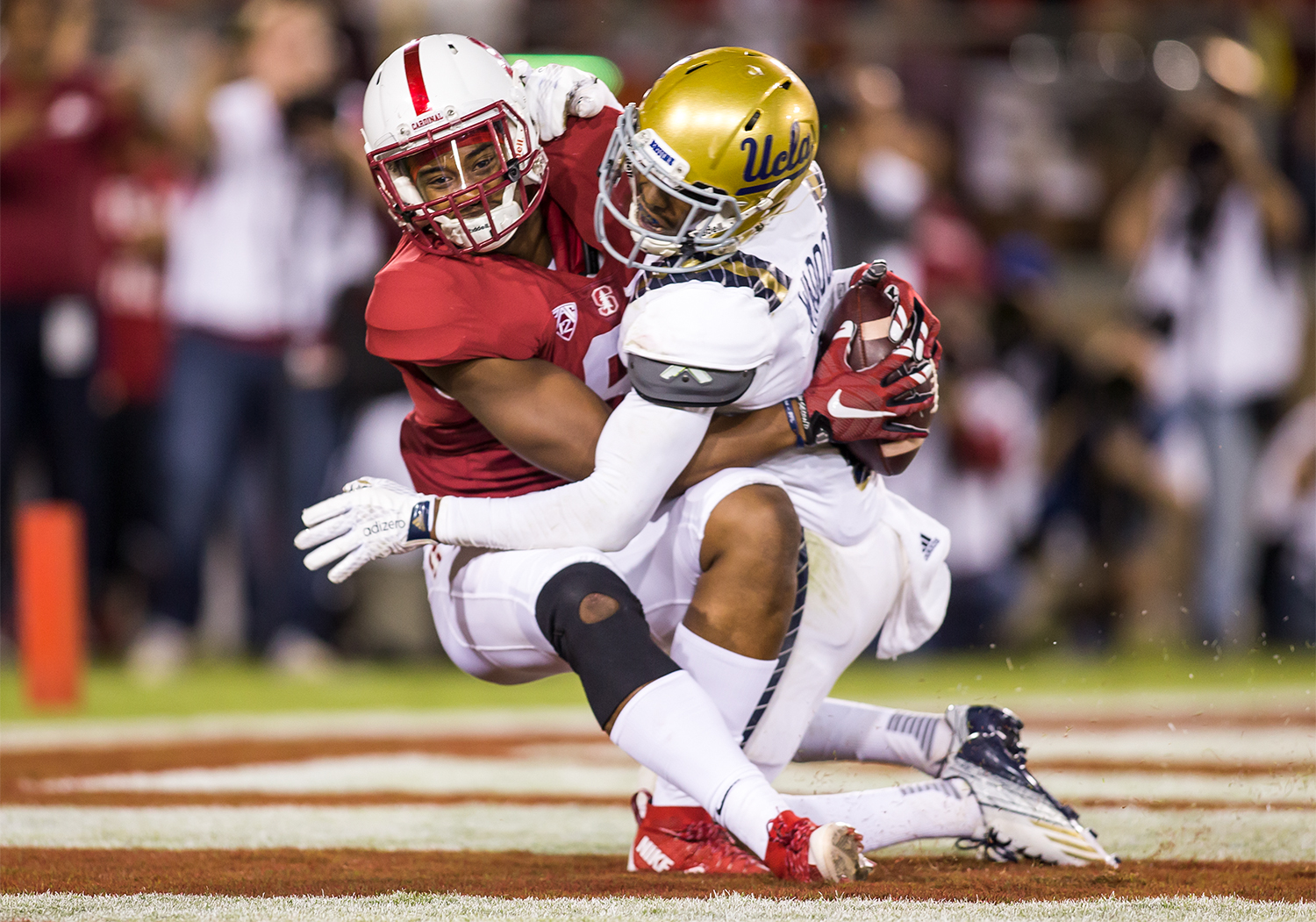 Stanford receiver Francis Owusu catches the ball behind the back of UCLA sophomore safety Jaleel Wadood in a play the ESPN broadcast team mentioned “may be the play of the year so far.” (Aubrey Yeo/Daily Bruin senior staff)

On Thursday night, his team delivered a play that was not only perfect, it was peerless. Quarterback Kevin Hogan started the play on the right of the offensive formation, charging left to collect the reverse pass. Scanning the field for a split second, he cocked back his arm and launched the ball downfield.

Forty-one yards away in the end zone, his receiver was already being tackled by Bruin defensive back Jaleel Wadood – one of the nine yellow flags amassed by UCLA.

Stanford’s Francis Owusu caught the ball while falling backwards, his arms wrapped around Wadood’s back. Raucous cheers erupted in Stanford Stadium and the Cardinal players rushed the field, their team ahead 42-17.

There were 20 minutes left to play.

The Cardinal’s unstoppable offense coupled with the Bruins’ lazy penalties and subpar defensive effort spelled out a 56-35 loss for UCLA, dropping the team to 4-2 on the season.

“Obviously you’re not gonna win a game with that many big plays,” said defensive coordinator Tom Bradley. “You gotta stop the big plays.”

Stanford brought an offensive onslaught Thursday in a game that asserted the Cardinal’s Pac-12 dominance and realigned the Bruins’ postseason perspective.

Sophomore running back Christian McCaffrey scored four touchdowns with an average carry of 9.7 yards per play – good for 243 rushing yards on the game. By the third quarter, McCaffrey was Stanford’s all-time single-game leading scorer.

“After that first game, a lot of people were against us, we remember that – that’s something we hold dear to our hearts, how we felt,” McCaffrey said in reference to the Cardinal’s season-opening loss to Northwestern. “It’s continued to push us and it will continue to push us. You can’t forget where you came from.”

Having fallen to Arizona State 38-23 on Oct. 3, this storyline mirrors last season – an upset by an unranked team followed by a blowout by a Pac-12 powerhouse.

“The only people that harp on the past are the fans and the media because it’s something to talk about because it’s there and you can’t deny it,” said coach Jim Mora. “The players and coaches, regardless of what’s happened in the past, we look at each game as a new challenge.”

Freshman quarterback Josh Rosen was 22-for-42 and 325 yards, but his two interceptions were costly. UCLA outgained Stanford by 65 yards, but lost a total of 92 to penalties. The Bruins also only managed a 19 percent third-down conversion rate compared to the Cardinal’s 42 percent.

With games against Utah and USC remaining on the schedule, if UCLA doesn’t figure out how to mitigate the losses of its four injured defensive players and stage a late-season comeback, this may be coach Jim Mora’s worst season as the Bruins’ coach.